Magnussen's RS16 burst into flames just seven minutes into the opening F1 session at Sepang on Friday when the Dane returned to the pits after his installation lap.

He missed the rest of the session, but insisted his proximity to the fire was "no drama", and outlined that an update to the fuel system was the culprit.

"Everything worked well on the car on the inlap. I just saw the smoke and hopped out.

"Fuel kept getting pumped out and obviously it caught fire on the engine cover, being hot.

"I kind of knew what caused it when it happened. We had some new parts on the car with the fuel system."

"There was a problem with a valve on a fuel breather pipe which meant that fuel escaped from the vent, causing a fire," Renault technical director Nick Chester explained.

"The crew did a great job keeping everything under control so we could address the problem. 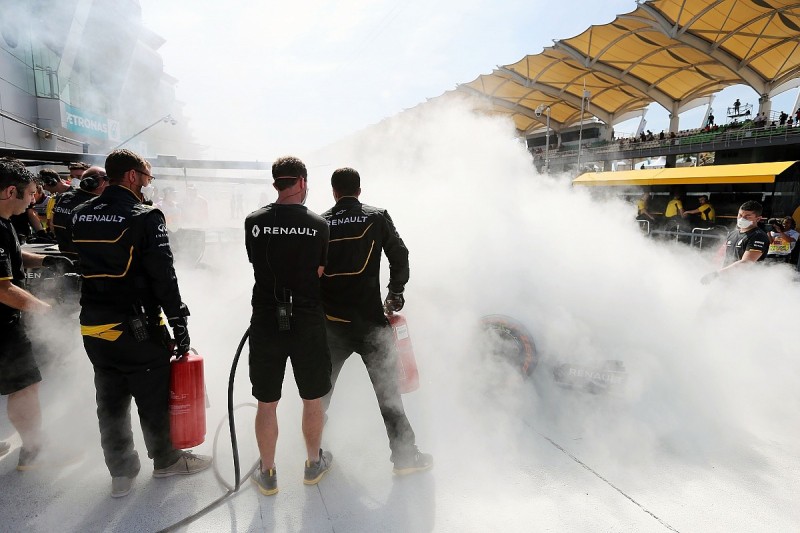 "We changed fuel systems for the second session and don't expect any further issues."

NOT THE BEST HALO CASE STUDY

Sceptical about the 2018 introduction of the halo, Magnussen said the extra time required to get out of the car with the cockpit protection device fitted could be key in circumstances like his fire.

"I've never run the halo, so I'm not the best person to ask," he conceded.

"[But] in my opinion, five seconds [to get out] is too long when the car's on fire.

Why Mercedes needs to watch its back in Malaysia