Ricciardo slewed off-track at the circuit's final corner as he geared up for what would have been his second flying lap of the afternoon F1 session on Friday.

The Red Bull went through the gravel trap on the outside of the track and hit the barriers with its left front.

"I made a mistake," Ricciardo admitted to reporters after the session.

"I did my first quick lap and everyone is cooling after that, producing fast lap, slow lap and then fast again.

"On the slow lap there was a yellow flag, so I went extra slow so that once I started my quick lap the yellow flag would have cleared and I would have been able to push.

"The tyres probably cooled too much and out of the last chicane I got on the power and had a few moments and just couldn't catch it."

The accident ended Ricciardo's session before he had chance to run the medium-compound tyres. He was fastest when he crashed, but ended the afternoon 10th.

"Obviously I just missed time there with an option [tyre]," he said.

"It seems straightforward, we know how the tyre responds and it looks like there is about one second between the compounds.

"Even though I only did one lap, we made some changes between P1 and P2, and I definitely felt better off. 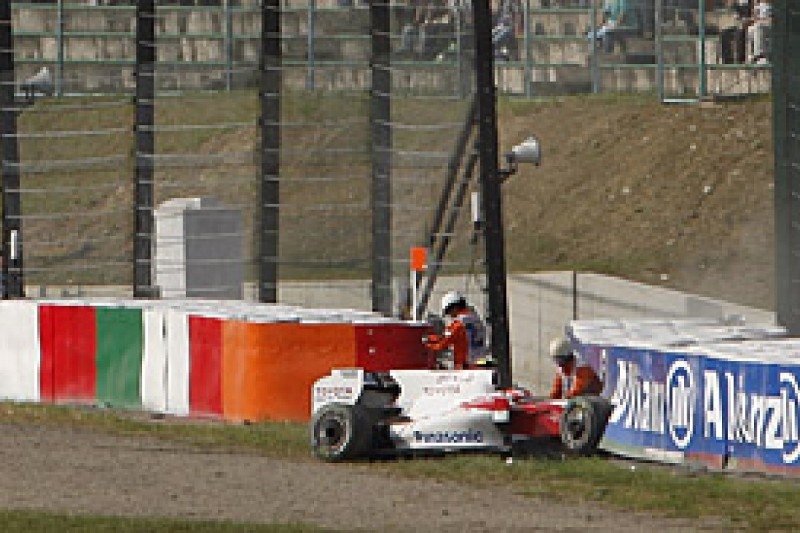 "It would have been nice to have stayed out there but we are still looking alright."
Ricciardo's team-mate Sebastian Vettel radioed the pits to make sure the Australian was alright after the crash.

Vettel said it had reminded him of Timo Glock's accident at the same place in the Toyota in 2009 (pictured). That incident ended Glock's season.

"I didn't know what exactly had happened," said Vettel.

"I saw the car in the barrier and asked just to double check and fortunately he was fine.

"A few years ago Timo Glock had a quite nasty accident there, which can happen very easily, which is why I asked."

F1 rookie Max Verstappen 'not even close to limit' on debut