Bottas edged his team-mate Lewis Hamilton by less than a tenth of a second, with Sebastian Vettel the best of the Ferraris but almost one second off the pace in third.

Mercedes started the session with a seven-lap run on medium tyres as most teams sought to make the most of the dry track running.

Saturday's final hour-long practice and qualifying sessions have been cancelled as a precaution amid the threat of Typhoon Hagibis.

That has left teams with only Friday's 90-minute sessions to prepare, and practice two is at risk of being compromised by rain.

Hamilton set the early pace on the initial runs on mediums, posting a 1m30.832s, although by the halfway point of the session Bottas had moved to the front on a 1m30.524s.

In the second half all teams switched to soft-tyre running - though Ferrari had used these tyres from the outset and still not beaten Mercedes' medium-tyre pace.

When the concerted qualifying-style laps began, Vettel held top spot briefly but his 1m29.720s was quickly eclipsed by both Mercedes drivers.

There were no further improvements at the front and the Mercedes duo stayed well clear as only Vettel managed a time within a second of the leader.

Charles Leclerc was fourth-fastest in the other Ferrari, just under two tenths slower than Vettel and a similar margin clear of Max Verstappen in the lead Red Bull.

Verstappen's early pace was not as strong as expected for the home race of Red Bull engine partner Honda, with team-mate Alex Albon three tenths slower in sixth.

They were not far clear of the leading midfield cars, which were headed by Carlos Sainz Jr.

The McLaren driver finished the session seventh, 1.9s slower than Bottas, and just ahead of the Racing Point of Sergio Perez. 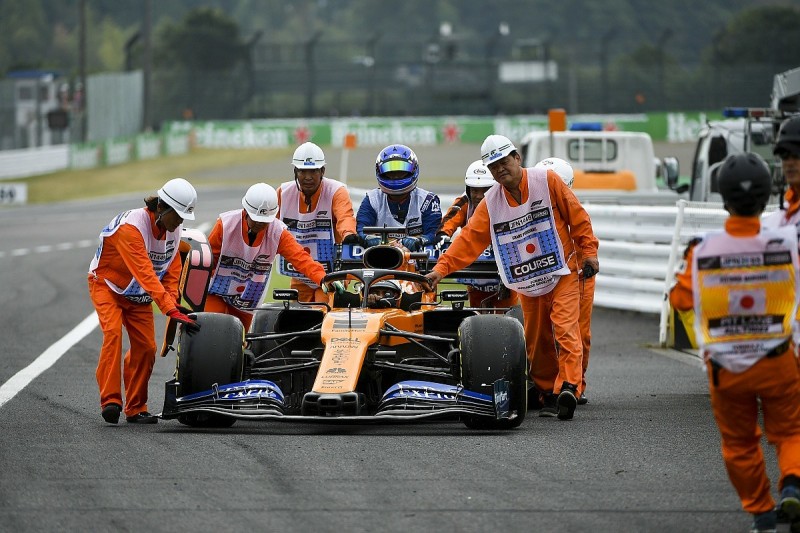 That was despite Sainz's car immediately grinding to a halt just beyond the pit exit as he set off at the start of the session, and having to be brought back to the paddock by the marshals. The issue was quickly rectified.

Lance Stroll backed up team-mate Perez in ninth, with Lando Norris completing the top 10 in the second McLaren.

Nico Hulkenberg was only 13th in the best of the upgraded Renaults, which were completing aero assessments through the session.

The Honda-backed reigning Super Formula and Super GT champion completed 30 laps, more than anyone, on his maiden grand prix weekend appearance at his home race.

Antonio Giovinazzi was unable to set a representative time and ended up slowest, having reported a problem with his Alfa Romeo early in the session and been instructed to drive back to the pits without changing gear.