The Japanese driver was dropped in favour of Audi sportscar ace Andre Lotterer ahead of the Belgian Grand Prix, but he will return to action for the Leafield team at this weekend's Italian round.

Caterham had hoped to run Formula Renault 3.5 title contender Roberto Merhi alongside Marcus Ericsson, but Merhi will drive only in first free practice on Friday because of difficulties securing an FIA superlicence.

Merhi remains hopeful of securing a race seat at Caterham for the next round in Singapore and Kobayashi expressed his unhappiness with the current situation at the team when speaking to reporters in the Monza paddock on Thursday.

When asked by AUTOSPORT if he was happy to be back, Kobayashi said: "It's not an easy situation.

"I am here for the sport of racing, but looking at the last couple of weeks I think it's more political stuff happening than sport.

"We've had talks with lawyers and this is what we have right now. I have a contract.

"Of course I'm not happy but this [situation] I cannot avoid."

Kobayashi said he only found out late on Wednesday that he would be needed at Monza and he had not been given a reason by the team for replacing him at Spa.

"Before Spa I was in the factory, we did some simulator work, I was ready to race, but just before coming to Spa they decided I wouldn't race," he added.

"I was still at Spa, just not at the track. I didn't want to come to the track.

"I wanted to avoid trouble. It was not clear what happened in the team and I had nothing to say.

"They didn't tell me a reason, just that I wasn't driving." 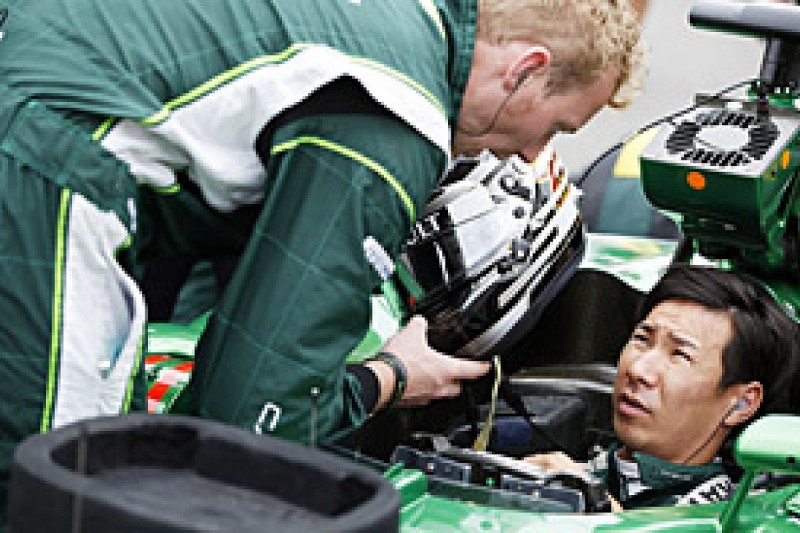 Kobayashi said his future beyond Monza is uncertain and that he couldn't be sure things would have been better for him had Tony Fernandes not sold the team to a group of Middle Eastern and Swiss investors advised by Colin Kolles.

"It's difficult to compare; the situation is different," Kobayashi said. "If the management didn't change maybe the team wouldn't be racing?

"I don't know the situation really - things are not clear.

"If they want to survive they need to do something and I think this is what they are doing.

"I think we need to look for other opportunities but let's see what we can do."