Ricciardo jumped to top spot in the final half-hour of the session, using softs to displace the ultrasoft-shod Vettel.

Max Verstappen backed up his pacesetting team-mate in third place, less than a tenth of a second behind, as Red Bull eyes one of its best chances to win again this season.

Ricciardo and Verstappen were the first to set a time when they kicked off their early running on medium tyres, but Kimi Raikkonen moved into top spot on a 1m18.762s.

That was whittled down by Raikkonen himself, then Valtteri Bottas and Vettel before the halfway point of the session.

Vettel led at that 45-minute mark on a 1m18.218s, with his time set on ultrasofts and Bottas two-tenths slower on softs.

After the mid-session pause, Vettel dipped below the 1m18s-barrier on a 1m17.997s, again using ultrasofts, before championship leader Lewis Hamilton jumped to second with a time less than a tenth slower despite using softs.

Raikkonen then used softs to displace Vettel at the top of the leaderboard on a 1m17.948s, but Vettel - the only frontrunner to lap on ultrasofts - pumped in a 1m17.692s around the hour mark to go fastest again.

Verstappen fell 0.009s short of Vettel, using soft tyres, on his next push lap before Ricciardo jumped both with a 1m17.613s.

That put him 0.079s clear of Vettel, despite a slow first sector, and 0.088s ahead of team-mate Verstappen.

Raikkonen was shuffled to fourth ahead of Hamilton, who endured a scruffy session and missed out on improving in the final half an hour with a lurid slide entering the chicane.

Bottas wound up even further back in the second Mercedes, lapping 0.8s off the pace but also avoiding the ultrasoft compound.

Haas driver Romain Grosjean left it late to steal best of the rest honours, nipping ahead of the Renaults on a 1m18.975s. 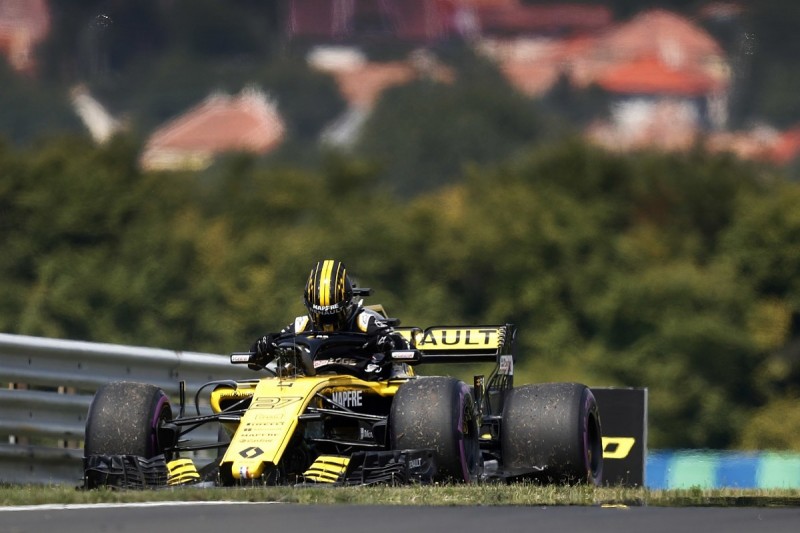 Nico Hulkenberg had looked set to earn 'Class B' honours in first practice but stopped on track exiting Turn 5 an hour into the session.

He still outpaced team-mate Carlos Sainz Jr by a tenth, with the second Haas of Kevin Magnussen completing the top 10 - the Dane, along with the two Saubers, trialled a new Ferrari engine, turbocharger and MGU-H.

The first 90-minute session was littered with errors as drivers wrestled with a low-grip track.

As well as Hamilton's troubles, both Sauber drivers endured some difficulties - in particular when Antonio Giovinazzi, driving in place of Charles Leclerc for the morning, locked both front tyres into Turn 1 early on and Marcus Ericsson suffered spins at the final corner and then Turn 4.

Ericsson avoided damage both times but wound up slowest, three seconds off the pace.