How does Mercedes' dominance of F1 compare to previous eras?

After Mercedes wrapped up another Formula 1 constructors' championship in the Russian Grand Prix, Nico Rosberg suggested it now matched the famous periods of dominance by McLaren, Williams and Ferrari

With Lewis Hamilton also poised to secure a second straight drivers' crown, Mercedes certainly has a case to suggest it should be considered alongside the McLaren-Honda team of the late 1980s, the Williams-Renault combination of the early 1990s and Ferrari with Michael Schumacher at the start of the 21st century.

"I've seen this team grow since the start of the Silver Arrows project in 2010 and the level we've got to now, all working together, is unbelievable," said Rosberg.

"There were some really tough years at the start but we are now the big team of Formula 1 - dominating the sport and breaking records along the way.

"When people think of F1 throughout history, it's only a handful of teams like McLaren in the 80s, Williams in the 90s and Ferrari in the 2000s that come to mind - and we are now making our own mark on that list."

So how do the current Mercedes team's achievements compare to the legendary runs Rosberg cites? 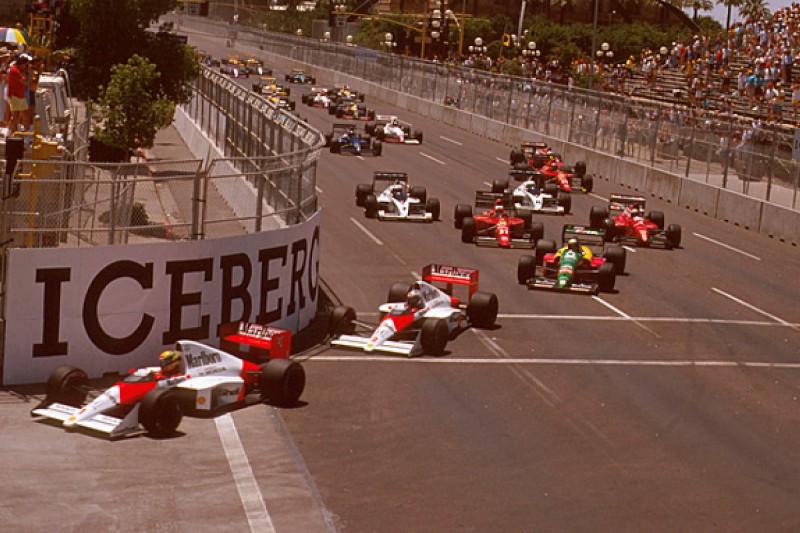 McLaren set the benchmark for F1 dominance when the Ayrton Senna and Alain Prost partnership won 15 grands prix out of 16 in 1988, but it faced greater opposition from Ferrari and Williams the following year.

There's an argument for extending the 'McLaren era' to 1991, given that its string of constructors' titles lasted until then while Senna also claimed his second and third drivers' crowns.

But by 1990 Prost had joined Nigel Mansell at an ever stronger Ferrari, while Williams was in the ascendance the following year. 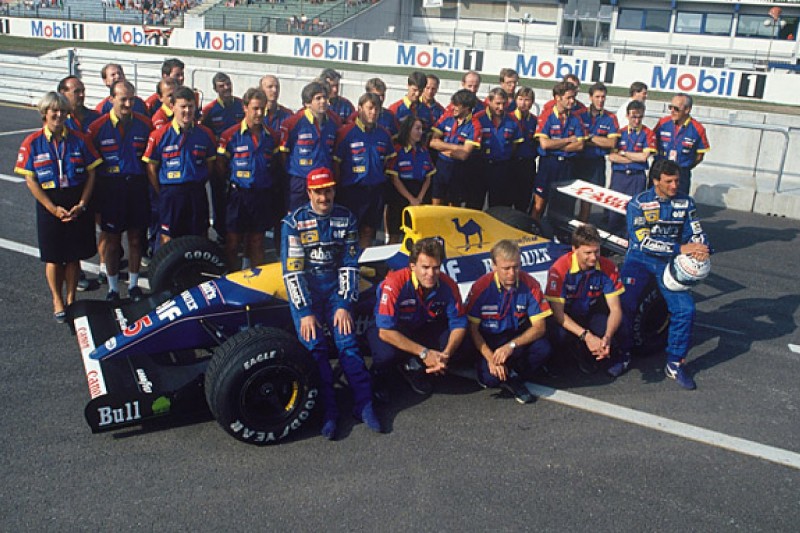 As McLaren and Honda faded, Williams took a stranglehold on F1 with the help of Renault engines, rising aerodynamic star Adrian Newey and by mastering technologies such as active suspension and traction control better than rivals. Nigel Mansell and Alain Prost took a championship apiece, but Senna and McLaren's efforts limited Williams's overall win rate.

Though Williams remained one of F1's main forces to the end of 1997 (and claimed further titles with Damon Hill and Jacques Villeneuve), Michael Schumacher, rule changes and Senna's death meant its absolute dominance lasted only two seasons. 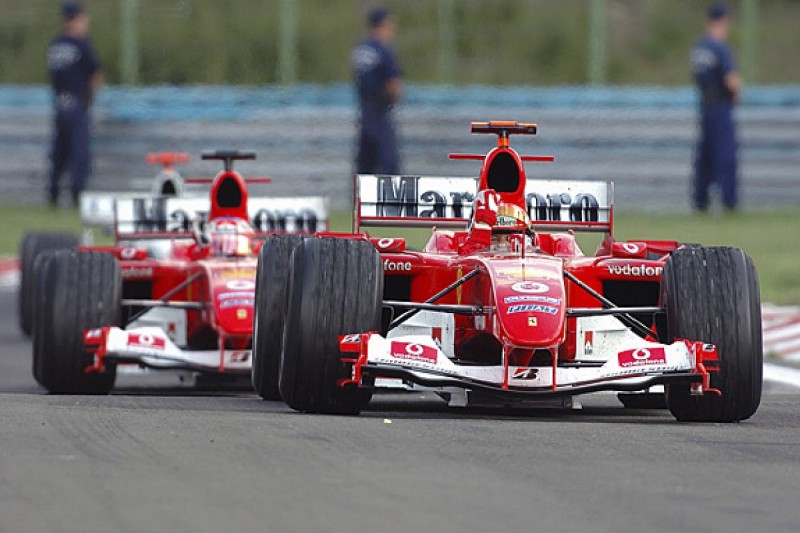 Michael Schumacher led Ferrari to a half-decade of dominance at the turn of the century, ending the Scuderia's title drought in emphatic style with a string of drivers' and constructors' crowns.

With Ferrari unbeaten in the title races throughout those five years, it's fair to take its stats from the entire period:

But as McLaren was still a strong threat in 2000/01 and the Williams-BMWs of Juan Pablo Montoya and Ralf Schumacher had a title shot in 2003, Ferrari could argue Mercedes should be aiming for its benchmarks from its most commanding campaigns in 2002 and '04, when its win rate was 85 per cent.

The relatively low pole rate is skewed by the fact qualifying took place with race fuel-loads from 2003 onwards, allowing several underdogs running lighter to upstage the Ferraris on Saturdays. However, even before then McLaren (in 2000) and Williams (in '02) had often shown better single-lap pace but failed to translate it to wins.

SHOULD ROSBERG HAVE GIVEN RED BULL SOME CREDIT? 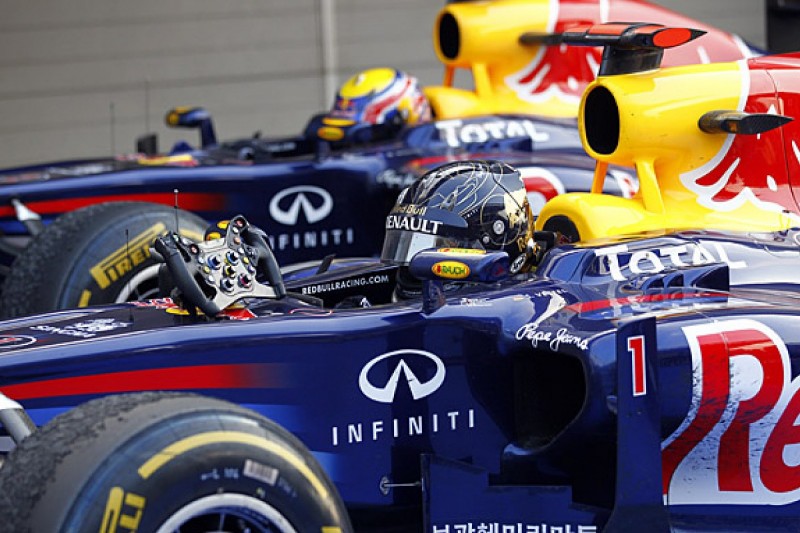 While the McLaren, Williams and Ferrari periods of dominance are already in F1 legend, Rosberg could also have looked at Red Bull's more recent title run with Sebastian Vettel from 2010-13.

But despite the impression of dominance at the time, the Vettel/Red Bull combination was not as untouchable as those above. 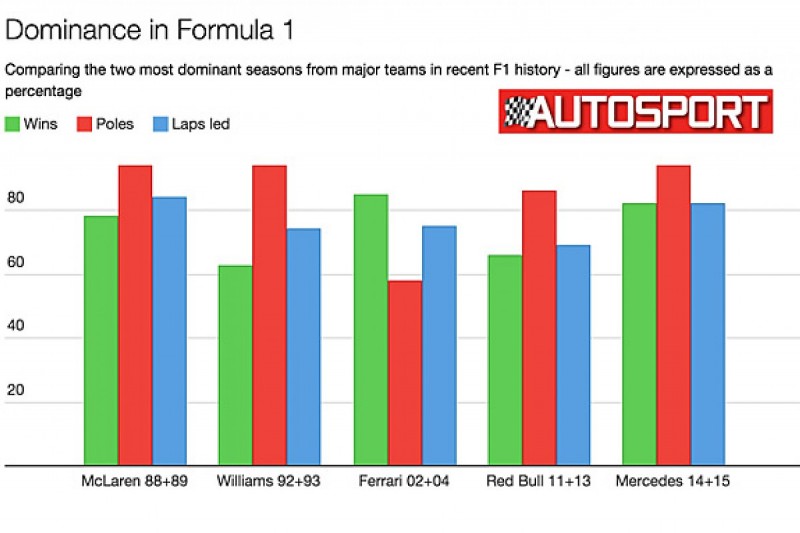