Berger, who is chairman of DTM's organising body the ITR, partnered Senna at McLaren from 1990-92.

The Austrian said he rates five-time world champion Hamilton above all the other title winners he raced against or has watched.

"Everybody always asks me, 'How do you see this driver against Ayrton?'" said Berger.

"And I always in all the years say, 'I don't see anybody near to Ayrton'. But Lewis is the first driver I put on the same level as Ayrton.

"The guy is outstandingly fast. He makes a bit less mistakes than the others, and what impressed me so much with him when you have won as much as he's won you [might] think, 'I'm second, either I'm going to run over his head and I win, or I'm out'.

"He doesn't do it, he just stays there and waits: 'OK I finish second, take the points.' It looks like he is just running the game in such a good way now that he's unbeatable at the moment.

"He won the championship five times, he won one race after the next one. Yes, he's in the best car with the best engine, but he's also the best - by far the best man at the moment."

Expanding on the comparison between Senna and Hamilton, Berger acknowledged the Brazilian has a special place in F1's history.

"I see still Ayrton winning the game, because in the end Ayrton was such a charming guy and personality, and obviously if someone loses his life and stays with us in the way of a legend, it's something special," added Berger.

"So I would say maybe there you have more sympathy. But I try to stay out of this, I try to see it from a performance point. 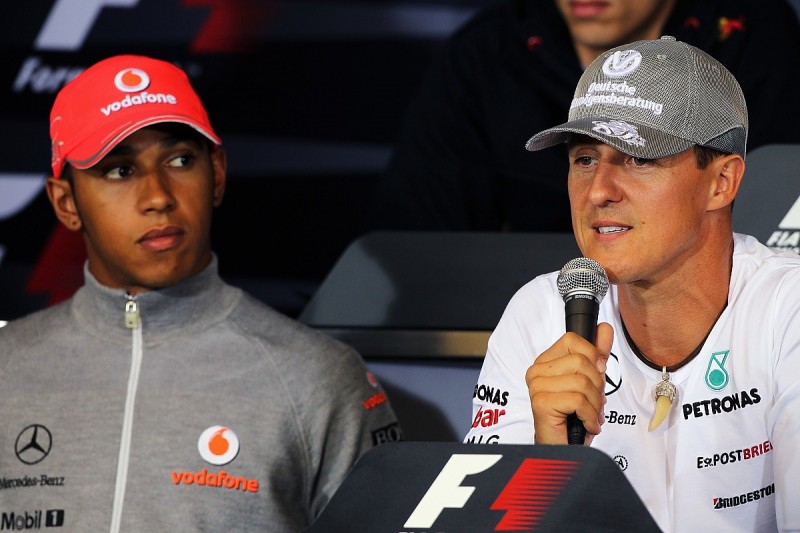 Asked to compare Hamilton with Michael Schumacher, Berger said: "On the one side you can just go statistically, who won the most races or whatever.

"And then you go a bit deeper, and say then who won the most races out of how many races he did, then you look at quali.

"I go more by feeling and watching.

"For me there have always been great champions, like Nelson [Piquet], Niki [Lauda], [Alain] Prost, like Michael.

"But there was always one thing above them, Ayrton. Now I see Lewis in the same league."

Berger said he thinks Hamilton can challenge Schumacher's records - including his haul of seven world championships.

"I think Lewis, if nothing happens to him and he keeps going like this, for the next two or three years, I think he's always going to be onto the championship," said Berger.

"Definitely he has the chance [to beat those records].

"What happened with Michael [his skiing accident], on one side I would like to protect Michael's success, because it's such a tragedy, and so sad.

"But when you put this all out for a moment, then Lewis Hamilton is a very special driver from all the time I watched F1."