Hamilton: "Small progress" not enough to overcome gap to Red Bull in Austria

Lewis Hamilton says the “small progress” Mercedes has made with its Formula 1 car since last weekend won’t be enough to close the gap to Red Bull in Austria.

Max Verstappen scored a dominant victory for Red Bull in the Styrian Grand Prix last Sunday, leading every lap as he extended his championship lead over Hamilton to 18 points.

Hamilton felt after the race that it was “impossible” to catch up with Verstappen, having said earlier in the weekend that there was a 0.2 second per lap gap between the two teams.

Mercedes wanted to work out ahead of the second race at the Red Bull Ring if a “wacky” car set-up had caused it to struggle so much, with Hamilton making a rare appearance in the team’s simulator earlier this week.

Hamilton managed to lead a 1-2 for Mercedes in second practice for the Austrian Grand Prix on Friday, finishing 0.217s clear of Verstappen in third place.

But Hamilton remained confident that Red Bull has “definitely got some extra [pace] in their bag”, and that the gains Mercedes had made were not enough to overcome the deficit.

“We’ve made some small progress today, but I think they still have the two-tenths, or maybe it’s a tenth-and-a-half, something like that,” Hamilton said.

“We’ve definitely made some small steps forward, but not enough to close that, it’s not the two-tenths. But over a single lap, that felt OK, it felt pretty good.

“I just expect them to turn up a little more tomorrow. They’ve almost basically got like the qualifying mode that we used to have. I’m gonna ask my guys, I don’t understand where they get it front.

“But it’s impressive and we’ve got to work hard to see if we can match it somehow.”

Practice on Friday offered far cooler conditions compared to one week earlier, as well as offering drivers a softer selection of tyres to use, switching to the C3/C4/C5 range.

Hamilton found the car to be “a bit of a struggle” through FP1 as he tried different set-ups that had been tested in the simulator, before moving closer to what he ran with last week.

“I was trying different variants of the car, and the car wasn’t happy, so then I had to make the change back to similar to what I had last week,” Hamilton said.

“But again, with some other adjustments, it felt much better. I’m generally happy with where the car is.

“I’m probably not going to change too much, because most often, if it ain’t broke, don’t fix it. Most of the time, we always try to eke out more, and it gets worse. I’ll be doing the tiniest of tweaks.”

Hamilton cast doubt on Mercedes’ ability to overcome the one-lap pace deficit to Red Bull over the long runs in the race, feeling the gap would remain stable. 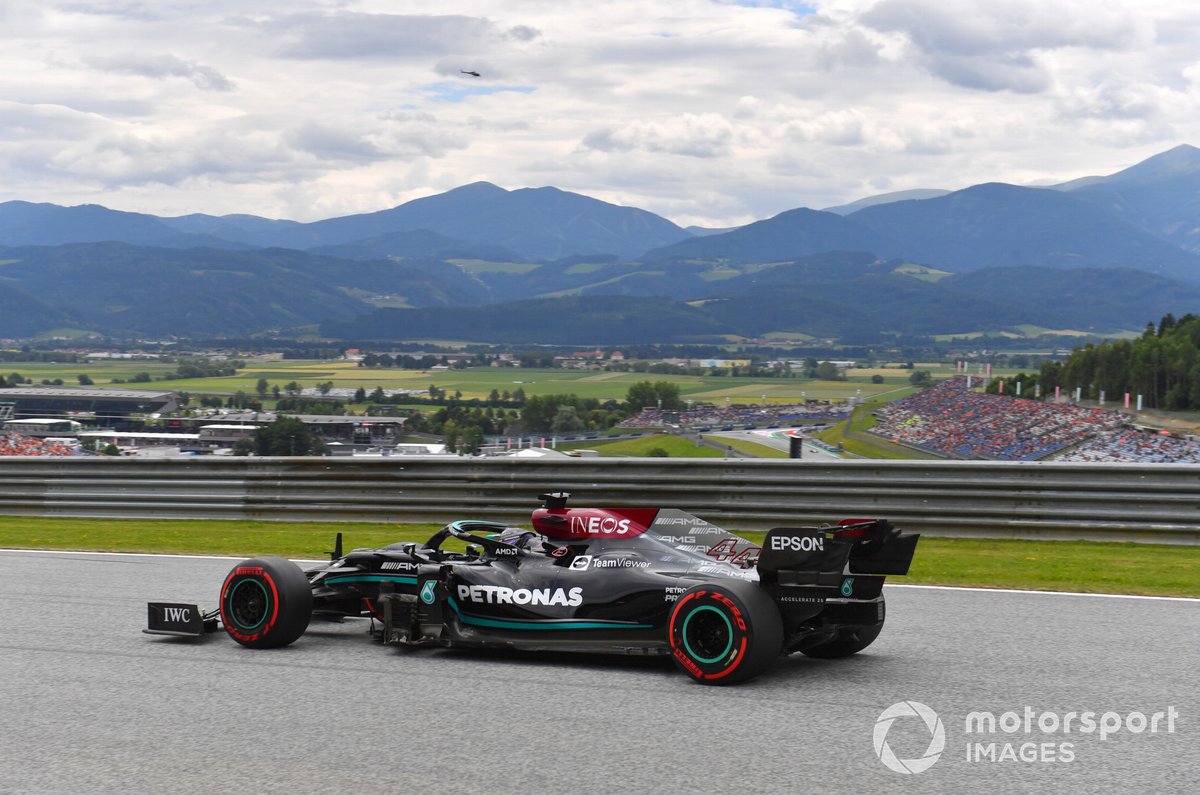 “I’m pretty sure it stays the same,” Hamilton said.

“Whatever gap they’re going to have tomorrow is usually the gap they seem to have on a Sunday.

“But we’ll be pushing, trying to make that gap as small as possible tomorrow, and if we can improve the car at all tonight, then great.

“I’d like to think that our long run was OK, I’m going to have to have a see, have a look now. I obviously had my off, but we’ll wait and see.”

“It's more about fine tuning, rather than finding big chunks of time.

“I think we started OK, in terms of how the call feels, much better than last week and hopefully we can build from that.”