Lewis Hamilton says his W12 was “a bit of a handful” in the wet Formula 1 qualifying at Spa, after Mercedes applied a set-up “compromise” covering wet and dry circumstances.

Unpredictable wet weather for this weekend’s Belgian Grand Prix has complicated matters for the drivers regarding the typical downforce-level balance needed to set the fastest times through Spa’s long, straight-heavy first and final third, and the more technical middle sector.

Autosport sources suggested after practice on Friday that with the difficulty of predicting when it would rain for the rest of the weekend – it was at that stage suggested the race could be dry, at least compared to the soaking conditions for qualifying – teams would opt to set-up their cars for optimum performance in the dry and have their drivers cope with that approach in wet conditions.

In the battle at the front of the grid, this would appear to favour Red Bull, which claimed pole with Max Verstappen, as its high-rake concept means the team struggles to reduce drag for dry conditions as the rear of the RB16B sits higher in the air, which in turn means it has more ‘natural’ downforce when using a dry set-up in the wet.

This is likely what Hamilton, who will start the Belgian race in third behind Verstappen and Williams driver George Russell, was referring to in the post-qualifying press conference when he said “I think there are people with different downforce levels” compared to Mercedes this weekend. 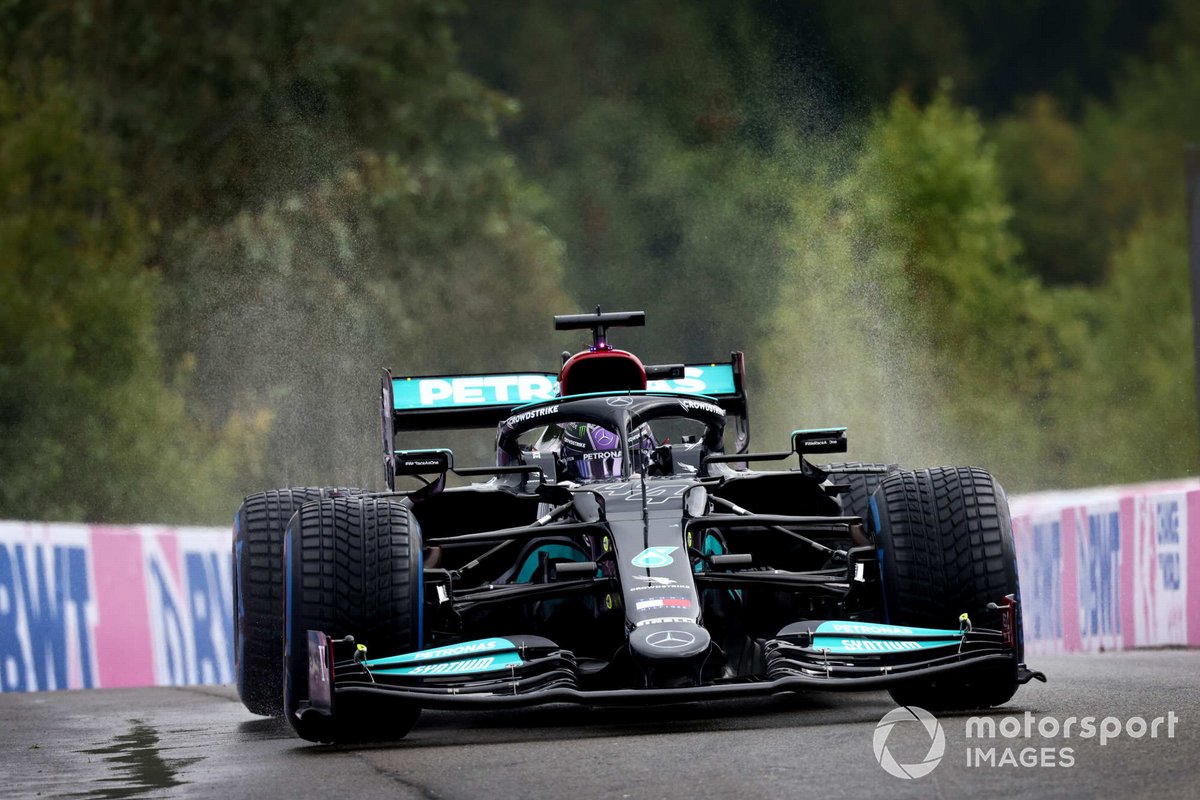 “Just a tricky session for everyone one with the rain – it was more intense in different parts of the circuit,” Hamilton said of qualifying on Saturday.

“A struggle I would say, for us, with our car today. We’ve seen with Valtteri as well.

“Just the car was a bit of a handful today. But nonetheless I’m really happy to be on the second row and the points are tomorrow.”

When asked to elaborate on his comments about his car handling in the wet, Hamilton replied: “Well, you know, there’s not really too much to say, it was just not a lot of grip out there for everyone and I think there are people with different downforce levels.

“We tried to find the best compromise, the best balance for both potential circumstances today and tomorrow – in terms of dry and wet. And so, we hope we’re ok.

“We’ll see what the weather is like tomorrow, and we’ll see how it works.”

After ending up 0.279s adrift of Verstappen having led the way in the disrupted Q3 session following Lando Norris’s huge crash at Eau Rouge, Hamilton said he was confident Mercedes has better race potential.

“I think our race pace should be a little bit stronger than our pace [on Saturday],” explained the world champion.

“But I still think it’s going to be a handful nonetheless – particularly if its these [wet] conditions [again].