Hamilton was following his team-mate ahead of the race resuming after an early safety car period had been called so the Portimao track could be cleared of the debris thrown up by Alfa Romeo team-mates Kimi Raikkonen and Antonio Giovinazzi colliding on the pit straight at the start of lap two, a clash that put the former out with a broken front wing.

Bottas led the pack around for the restart but, because of the headwind running down the main straight, waited until he reached the grid hatchings before accelerating back to racing speed.

Hamilton appeared to be caught out at the vital moment, which meant he lost ground to the leading Mercedes and was then overtaken by Verstappen on the outside run into the first corner.

“It was interesting,” Hamilton explained in the post-race press conference after successfully repassing Verstappen, hunting down Bottas to take the lead, and then dominating proceedings to the finish to take victory.

“Because I was naturally focusing on Valtteri and literally, just for a split second, I looked in my mirror just to see where Max was and in that split second, that’s when Valtteri went.

“And so, I lost out to Valtteri and that wasn’t great! Then, I was in Valtteri’s tow, and [Verstappen] was about to pull out, and I pulled out and gave [him] Valtteri’s tow. 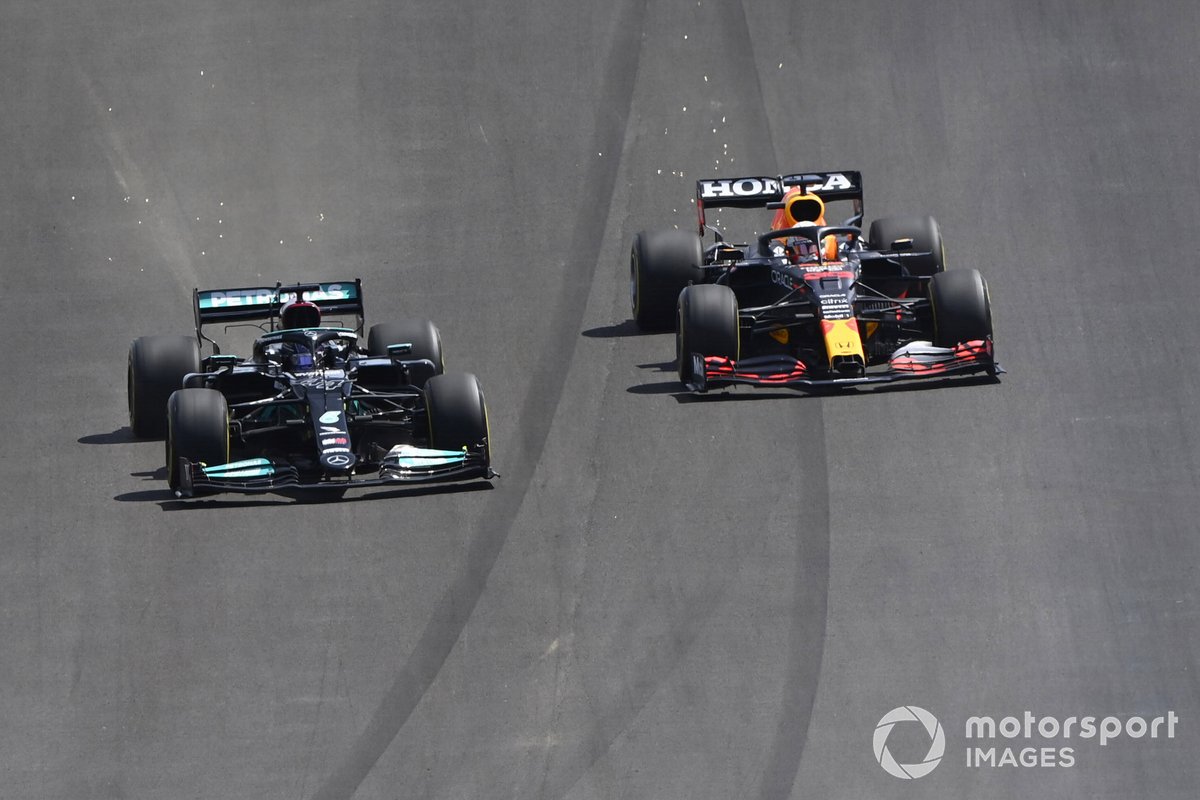 “Then, after that, being behind [these] two – what a great track, it enabled us to fight close in that first stint I think that’s really what the fans want.

“That’s definitely what I want from a racing point of view.

“This track was really great because you can have different lines at certain corners – a bit like Austin. So, it was really awesome.”

After claiming his second win of 2021, and his second in succession in Portugal, Hamilton reflected on his “very tight” eight-point lead over Verstappen in the drivers’ standings.

Hamilton said: “I saw that he had gone in for the fastest lap and got it, but obviously Valtteri ended up with it at the end [after Verstappen’s faster lap was deleted for running too wide exiting the penultimate corner on the last lap].

“As you can see, it’s a great fight between Mercedes and Red Bull, and I’m sure also down the field, and I think it’s clear that we just have to continue… [that] we’re going to be pushing each other right to the last race.

“We’re going to be sick of each other at the end, I would imagine! Or at least sick of racing because there’s so many races!”