Mercedes driver Hamilton led every lap at Shanghai, but once Vettel made his way past the cars that jumped him early in the race due to his pitstop under virtual safety car conditions, the two engaged in a battle of lap times as Hamilton tried to keep the Ferrari driver at bay.

"From the get-go I felt I had the pace to control, to be in that position," said Hamilton, who beat Vettel by 6.2 seconds to leave them level at the top of the standings after two races.

"I didn't really understand what was going on behind because I had the Red Bulls [in second and third] and the Ferraris weren't getting past.

"I was controlling it at that time, I was quite chilled at the front because I wasn't being pressured from the Red Bulls.

"But when Sebastian got behind, then we had a real race on our hands, but obviously I had that gap."

Vettel believed the timing of the safety car, moments after the race had restarted following the virtual safety car period during which he had made his early stop, was 'unfortunate' for his hopes, and Hamilton agreed.

"If there wasn't a safety car it would have been a flat-chat race, a couple of seconds between us the whole way," said Hamilton.

"We were very close in lap time and it was unfortunate that he got stuck behind the other cars.

"It's always a lot easier when you've got a good gap to maintain. When it's one second, it's pretty hair-raising." 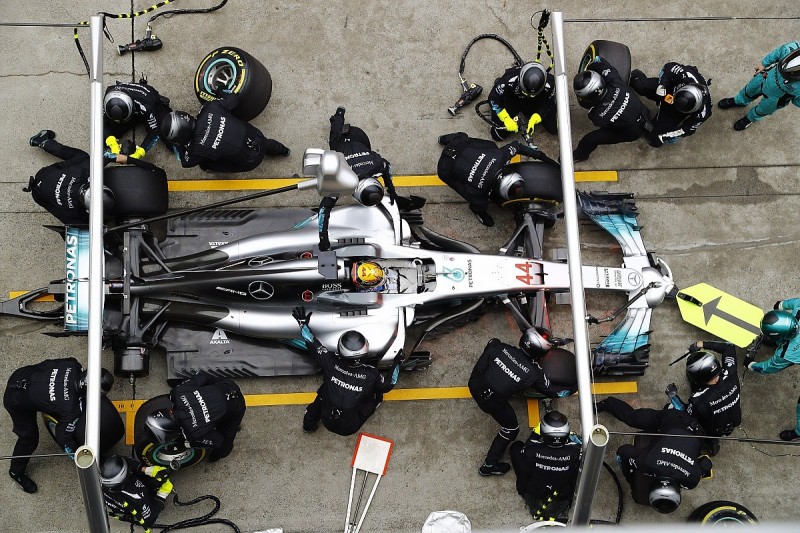 Hamilton praised Mercedes' strategy calls during the race, including when to switch from intermediates to slicks early on, and the decision to make his final stop at a time that allowed him to maintain the lead.

"For me there was no risk to come in [for slicks]," he said. "It's often when you want to gain something, you tend to decide to take a risk.

"It was more of a risk at that time for me to come in a lap earlier, as I was still doing a decent pace.

"The strategists did the right job in terms of reacting to the scenarios.

"Now, having seen my tyres, I could have gone to the end of the race [without an extra stop], but we are still learning with these tyres.

"They felt OK still, but I didn't know if in 20 laps they would have dropped off the cliff and one of the other guys could have taken a different strategy and made it to the end.

"Luckily I already had a pitstop window so I could stop and still come back out in my position, so I took it."