Grosjean and Renault's Jolyon Palmer were both given five-place grid penalties for improving their times after passing double-waved yellow flags for Giovinazzi's wrecked Sauber in the middle of the track after he went off at exiting the final corner.

Both drivers claimed they backed off, but the stewards ruled that they "attempted to set a meaningful lap time", which is not allowed in the rules.

"If they want everybody to stop, they need to throw a red flag," said Steiner.

"Sometimes you have to be conscious that we actually race.

"Romain backed off. It's a double yellow, he was - in my opinion - in control of the situation.

"If you look at the [data] trace, he lifted, saw nothing, accelerated, saw the wreck, lifted again.

"Sometimes I don't get it, but anyway, I'm not a steward.

"He was in the wrong place at the wrong time - we paid a penalty for that one.

"Otherwise we could have made it into Q3, there was a chance." 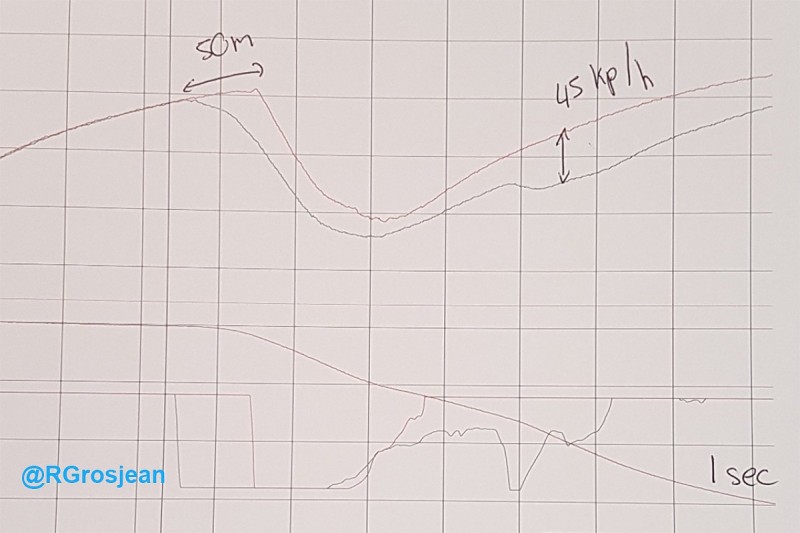 Grosjean took to Twitter on Saturday to reveal data from his lap (above), saying: "So apparently I made no effort to slow down and didn't abandon the lap... data shows a different point of view."

Speaking before the decision from the stewards, he added that he was initially told it was a single-yellow flag zone, which is why he stayed on track to complete the lap.

"I backed off before the corner, took the corner slowly," he said.

"I didn't go to the pit because the engineer told me it was a single-yellow flag so that could just be a spin and going again, I didn't know it was a crash.

"I lost one second and I was fully backed off before the corner, and after the corner."

Grosjean added that he felt the situation was skewed by the fact that he spun on his first attempt in Q1, meaning he was bound to improve his lap time even if he backed off next time through.

"The first lap was 17 seconds off, so of course I was going to go faster," he said.

"The first time I was sideways, a bit on the grass, spinning the car around."

Palmer, whose first run in Q1 was compromised by low front tyre temperatures and a flat-spot, believed it was clear that he also backed off.

"I was on to cruise through to Q2 but I didn't complete the lap because of Giovinazzi," said Palmer.

"We can see from the times that it would have been very comfortable to get through. I completed the lap, I just backed off.

"It's clear that I back off a lot. It's up to an interpretation of how much you're backing off."