Pierre Gasly says that his AlphaTauri Formula 1 team may have to review its front wing design after he lost his in contact with a kerb in Sochi on Friday.

The incident came just one race after the Frenchman had a huge crash at the start of the Saturday sprint race at Monza after his front wing became caught under his front wheels following contact with Daniel Ricciardo’s McLaren.

Gasly also lost a front wing as a result of contact in the opening race of the season in Bahrain.

Today’s incident happened when Gasly ran wide across a “banana” kerb towards the end of the FP2 session, and the wing was instantly dislodged. He admitted that it was surprising that the contact had caused the damage, and that his team might have to "revise" it.

“It seems like our front wings are quite fragile,” Gasly told Autosport. “[I lost one] with Daniel in Monza, also in Bahrain, and Yuki [Tsunoda lost one] in Monza as well.

“I understeered a bit, so I was going to hit the kerb right in the middle of the car, so I opened to go behind it, thinking it was going to be better. And in the end the whole front wing went off. So we need to see if we can do something for that, but no big concern.

“In cases like this bananas are not made to destroy the car, just to kind of slow you down. It was a bit surprising.”

On a positive note Gasly finished FP2 in third place, behind the Mercedes duo of Valtteri Bottas and Lewis Hamilton. Rain is expected on Saturday, and thus there is unlikely to be any more dry running before Sunday’s race.

Asked if the performance was realistic he said: “I would say it’s encouraging. This morning I was P6, then P3 this afternoon. Obviously we know what could happen for the rest of the weekend with tomorrow and the conditions, and I think that it’s really good to to put a strong time today. 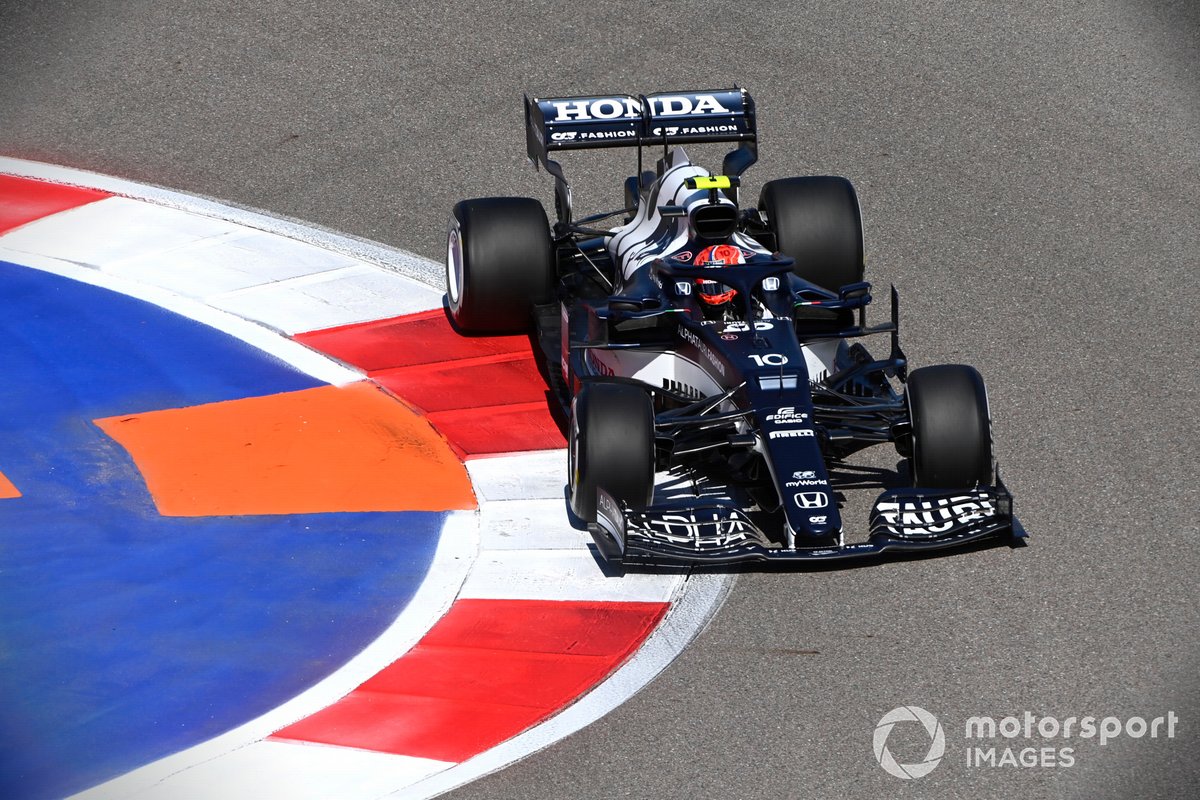 “It wasn't so easy, I didn't feel as comfortable as usual within the car, quite a lot of work to do. But I think it's pretty difficult for everyone. Just happy we managed to be strong in both sessions, because it's promising for the rest of the weekend.”

With Max Verstappen heading to the back of the grid due to a PU penalty the third podium slot behind the two Mercedes drivers has potentially opened up.

“That always brings more opportunities, because they start at the back,” said Gasly. “We know how fast they usually catch up with the pace they have in the race.

“But nevertheless, I think we we have a good chance to start at the front, and potentially some good points. So it's encouraging for the rest of the weekend.”

Gasly is determined to bounce back from a disastrous weekend in Monza, where his sprint crash was followed by early retirement in the Grand Prix itself.

“For the whole team, I must say it was a big disappointment," he said. "You know, a year after the win, everybody wanted to do well. Home race for all of us, and Yuki didn't even take part in the race, I was out after one lap. So obviously a big disappointment.

“Looking back, it hurts when we see how the race panned out after all the safety car, crashes, etcetera. But we had the speed, we qualified sixth, ahead of the Ferraris, we were very fast in practice, we have a new engine in our pool.

“So there are still a lot of positives to take even though we didn't get the reward in the end, which which is painful.”