It only raced once, but the 1939 W165 could be the most remarkable of all Silver Arrows, thanks to some controversial race organising and a secret project. KEVIN TURNER told its story in the 29 December 2016 issue of Autosport magazine

The Italians were fed up. Having seen off Ettore Bugatti - an Italian working in France anyway - Alfa Romeo had dominated grand prix racing in the early 1930s, occasionally challenged by Maserati. Then things changed in 1934.

When German squads Mercedes-Benz and Auto Union arrived they brought new levels of professionalism and technical prowess with them, not to mention the power of Nazi state funding. Nobody could stand in their way.

There was some resistance. Louis Chiron won the 1934 French Grand Prix for Alfa Romeo as the new silver wundercars failed, and the great Tazio Nuvolari scored perhaps his finest victory in Alfa's P3 Tipo B at the 1935 German GP on the famed Nurburgring.

These were merely blips, however, as the Silver Arrows marched to success after success. In 1936 and 1937, Mercedes and Auto Union won all the major GPs. Other nations had to look to other areas of the sport, like the Le Mans 24 Hours.

The switch to new three-litre regulations in 1938 only briefly gave French firm Delahaye a look in at the Pau GP and even Italian Nuvolari was an Auto Union driver by then.

Alfa Romeo's extreme efforts to respond included the Bimotore, which combined two eight-cylinder engines to produce 500bhp, but increasingly Italian success was limited to sportscars and the Voiturette class, akin to the Formula 2 of its day. 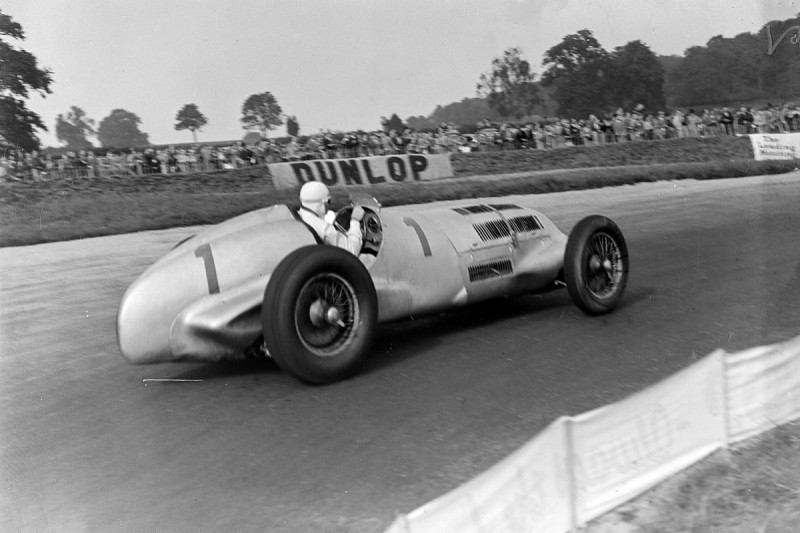 And so the organisers of the GP in Tripoli, an Italian colony, elected to make changes for the 1939 race, to be held on 7 May. It is possible that the need for 30 cars due to the annual lottery associated with the race contributed to the decision, but after the 1938 Italian GP in September, it was announced all Italian races would be run for 1500c Voiturettes in any case.

Underlining the W165's superiority was that Caracciola, already past his considerable best, beat the leading red machine - Emilio Villoresi's Alfa - by more than four minutes

The Tripoli event, which was one of the most prestigious and lucrative in terms of prize money, had been won by German cars for four years. The switch from the then current three-litre GP formula to the Voiturette regulations left Mercedes and Auto Union with no eligible cars less than eight months before the race. An Italian victory, probably for Alfa Romeo's gem of a new 158, thus looked assured.

Except Mercedes decided to develop a brand new car over the winter specifically for the race, perhaps encouraged by the possibility that GP racing could switch to supercharged 1500cc rules from 1940. Work began in November, in complete secrecy.

"The Italians thought that we couldn't possibly build new machines in such a short space of time, but by working day and night the Mercedes engineers built two cars especially for the Tripoli race," recalled Mercedes driver and former chief mechanic Hermann Lang in Chris Nixon's book Racing the Silver Arrows. Quite what the organisers and competitors thought when the two new W165s broke cover at the super-fast 8.14-mile Mellaha circuit can be imagined...

The W165 looked like a scaled-down version of Mercedes' successful 1939 three-litre V12 W154 grand prix car, but used a new 1.5-litre V8 producing around 250bhp. Famed technical director Rudolf Uhlenhaut, one of the key figures behind Mercedes' successes before and after the Second World War, believed the W165's similarity to its bigger brother was key.

"We only just got them ready in time for the race, but we were able to do so because the design was similar to our three-litre machines," he said in Racing the Silver Arrows. "The valve gear, pistons and chassis were the same, only smaller.

"We only made three engines - two for the race and one spare for testing. We tested all the parts of the engine first on separate test beds, so when we assembled the engine every part had been tested and it worked properly straight away." 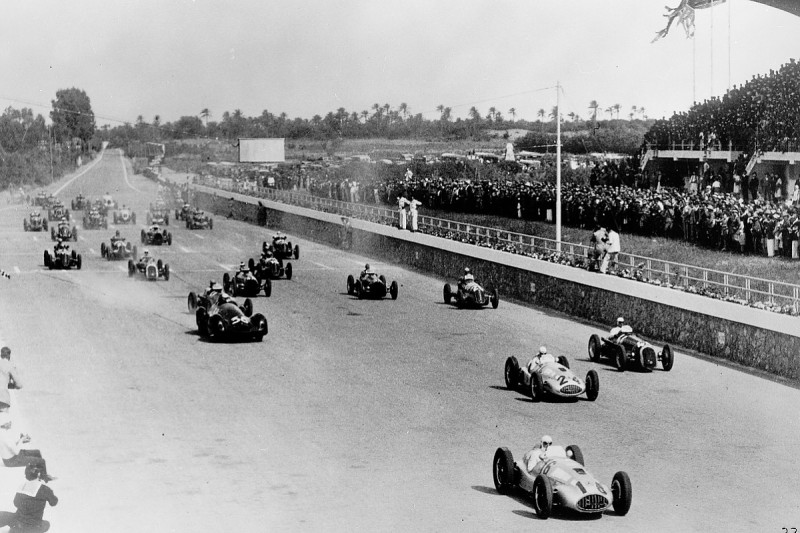 GP stars and rivals Lang and Rudolf Caracciola were on hand to drive the two baby Mercs and both were comfortably under the class lap record in practice, despite a lack of track testing and the fact one car was completed on the ship on the way.

"The V8 Mercedes has an ear-splitting crackle, goes like a rocket and holds the road amazingly well," said The Motor at the time.

Nevertheless, Luigi Villoresi's streamlined Maserati qualified on pole, followed by Lang and Caracciola, with future inaugural Formula 1 world champion Giuseppe Farina completing the four-wide front row in his Alfa. Each W165 had slightly different gear ratios, giving one better acceleration, the other a higher top speed. Predictably, both drivers thought the other had the advantage.

"My orders were to try and break the opposition by going really fast and then changing tyres," explained Lang, who admitted to being angry about his team-mate having the W165 with better acceleration. "Caracciola was to take things easier and go through the whole race on one set."

Amid the intra-team tension, Lang - winner of the race in 1937-38 in GP machinery - jumped into the lead at the start, having established with team boss Alfred Neubauer that the race began when the lights went out, not when local governor Marshal Balbo dropped the flag.

Villoresi's rapid Maserati was trailing oil immediately and gearbox problems put it out of contention. The hard-trying Farina urged his Alfa ahead of Caracciola for a few laps, but there was no catching Lang and the Italian machine wilted under the strain anyway. Many of them did in the sweltering heat - only 12 of the 30 starters finished.

Almost inevitably, two of those were the new Mercedes. After the pitstops Lang completed his Tripoli hat-trick at an average speed less than 5mph down on his 1938 effort in the three-litre V12 W154. 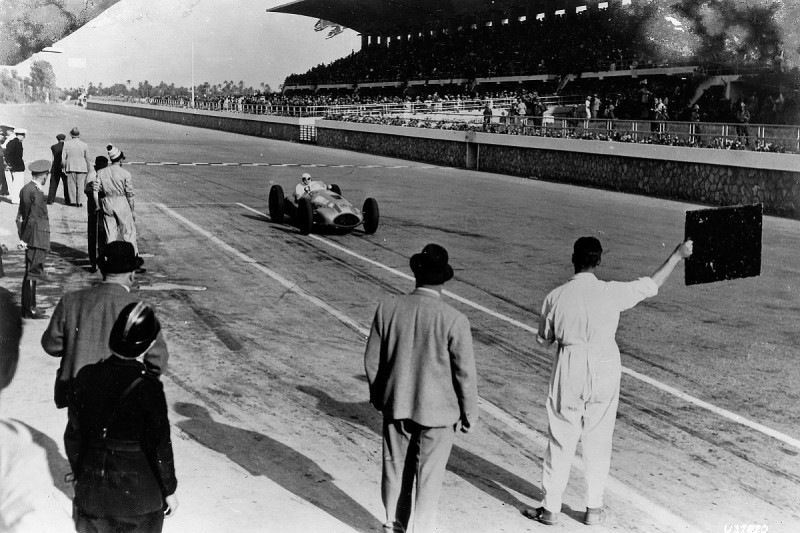 To put the speed of the circuit into perspective, he completed the two-hour event at an average of just under 123mph [almost identical to Valtteri Bottas's winning speed in the 2020 Russian GP in Sochi].

Underlining the W165's superiority was that Caracciola, already past his considerable best, beat the leading red machine - Emilio Villoresi's Alfa - by more than four minutes.

Caracciola tried to run one of the cars at the 1946 Indianapolis 500, but that plan failed. The Tripoli 1-2 was thus the W165's only race appearance.

"There is no doubt the race was the greatest 1500cc race we have had for many years," reckoned The Motor, but in truth it had been a rout.

Once again, the Germans had put one over the Italians. 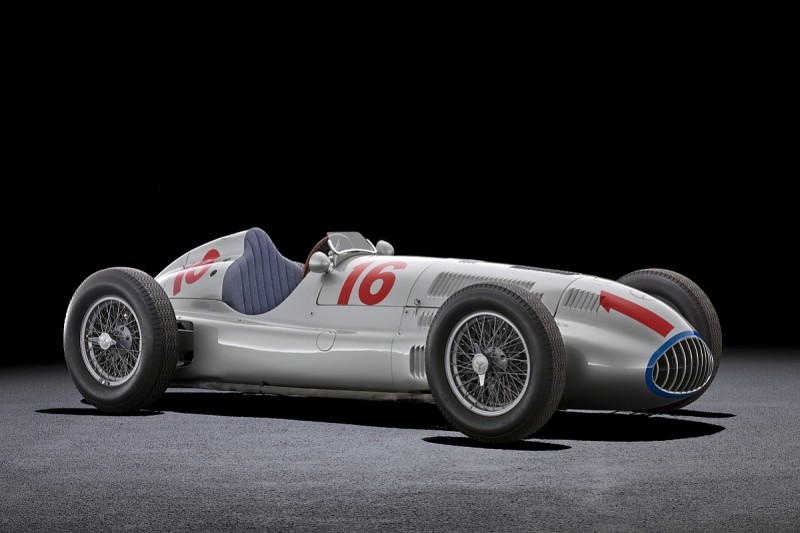 The influences of Mercedes on McLaren's 2021 challenger