Anthony Davidson only raced in the same team as Jenson Button once, on a fruitless afternoon in Sepang when both BAR-Honda drivers were halted early by engine failures. But in their long association both at the team, where Davidson was a loyal tester, and as karting rivals of many years makes the 2009 world champion Davidson’s favourite team-mate

The 2005 Malaysian Grand Prix was not a memorable one for BAR-Honda. Both cars were out by lap three, and predictably it was an opportunity for Autosport’s resident cartoonist Jim Bamber to poke fun. Having waited years for the opportunity to race a BAR in anger, long-time tester Anthony Davidson recalls his last-minute call up to replace an unwell Takuma Sato as an “unbelievably disappointing” weekend.

But it was a special one too as, for one race only, Davidson was a team-mate to old karting rival Jenson Button. In truth, they’d already spent two years working alongside one another, following Button’s arrival from Renault for 2003. In that period of unlimited testing, Davidson had ample opportunity to compare himself against his compatriot, and F1’s decision to allow teams to run a third car on Fridays in 2004 had provided Davidson a platform to stake a claim for a race seat by impressing in official practice sessions.

Williams’ ultimately unsuccessful bid to bring Button back into the fold for 2005 meant Davidson remained a tester in the year that followed BAR finishing runner-up in the constructors’ championship. But lining up together on the grid for that year’s second round, stand-in Davidson was a creditable six places behind his full-season team-mate after his “last-minute call” having missed practice, is a memory that the 43-year-old cherishes today.

And when it comes to picking a favourite team-mate, 2014 World Endurance Championship title-winner Davidson says it’s a “really easy” choice to pick the 2009 F1 champion.

“We pretty much grew up together in karting, similar ages, in all similar categories, raced up and down the country wheel-to-wheel, always fierce competitors and basically followed each other all the way through in our career,” says Davidson, the elder of the pair by nine months.

“Two little kids from our karting days, we turned up in Formula 1 and we got right to the top. And just for one race we were team-mates in Malaysia. It was great that this guy, who I raced against all the way through my career, we ended up not just in F1 but in the same team as team-mates. It’s quite a remarkable story really.”

After passing the ailing Button, Davidson’s engine lasted but a few corners further into the race before he was forced to pull off too. 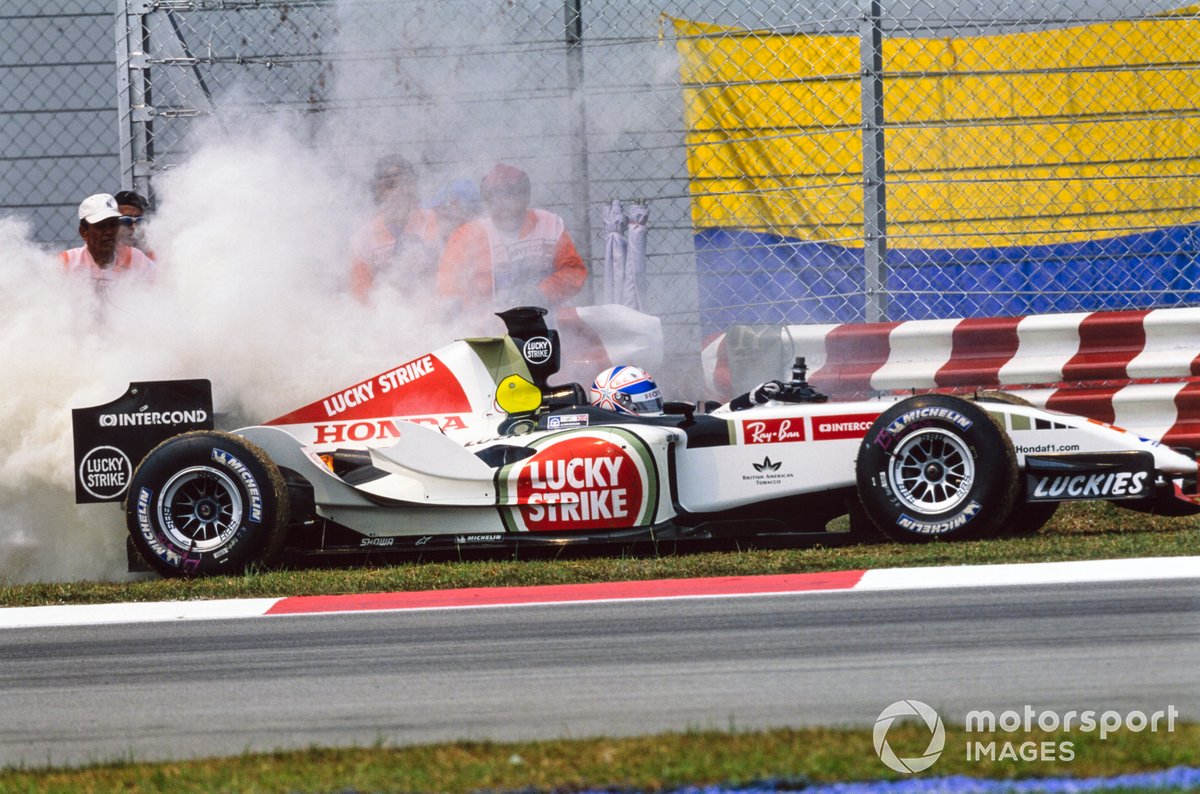 “I actually went further in the race than he did, so I’ll take that – a 100% win ratio against him!” he jokes. “As I passed his car at the side of the track in a plume of smoke, I was really sliding everywhere. I thought: ‘Now it all makes sense why I’m sliding around, because obviously there’s oil on the track. This an absolute nightmare, I definitely seem to be sliding around more than anybody else, but I’ve passed his car and it should be alright now’.

“And after I’d passed his car, I still kept sliding around and I thought: ‘That’s taking a long old time for the oil to get off my tyres’ and realised quite soon after that it was my own oil that I was sliding around on, before my engine blew up as well!”

Although Button’s continued presence at BAR blocked his own path to a race seat, Davidson stresses that such matters are “never personal between drivers”. He remained as the test driver after BAR’s takeover by Honda for 2006, before racing for its B-team Super Aguri in 2007 and 2008 alongside Sato.

"He [Button] was always a driver that focused more on exits, he would carry quite a lot of minimum corner speed but also somehow managed to get a very good exit as well. He always kept it clean, always used all of the track, so I learned a lot from him in F1" Anthony Davidson

“It’s the team that makes the decision on who drives their car and it’s never personal, as it wasn’t with Fernando Alonso at Toyota with me,” he says. “It wasn’t him, it was the team that took that decision, so there are never hard feelings.

“Of course I joked at the time ‘I wish he’d left’ because that might have opened up a gap. But you can’t ever blame a driver, they’re out there fending for themselves and rightly so. You should only have your own best interest at heart and do everything possible to maximise your career potential.

“I choose Jenson with absolutely no hard feelings at all and no jealousy at all either. I’m really happy that he went on to win a Formula 1 world championship, right place at the right time, and always had the skill to do it.

“It proved what I’ve felt all along about that young generation coming up through karting, as we were back then with the likes of Dan Wheldon, Justin Wilson, Jenson, myself. We all knew we were good and we all knew one of us at least would go on to have huge success.” 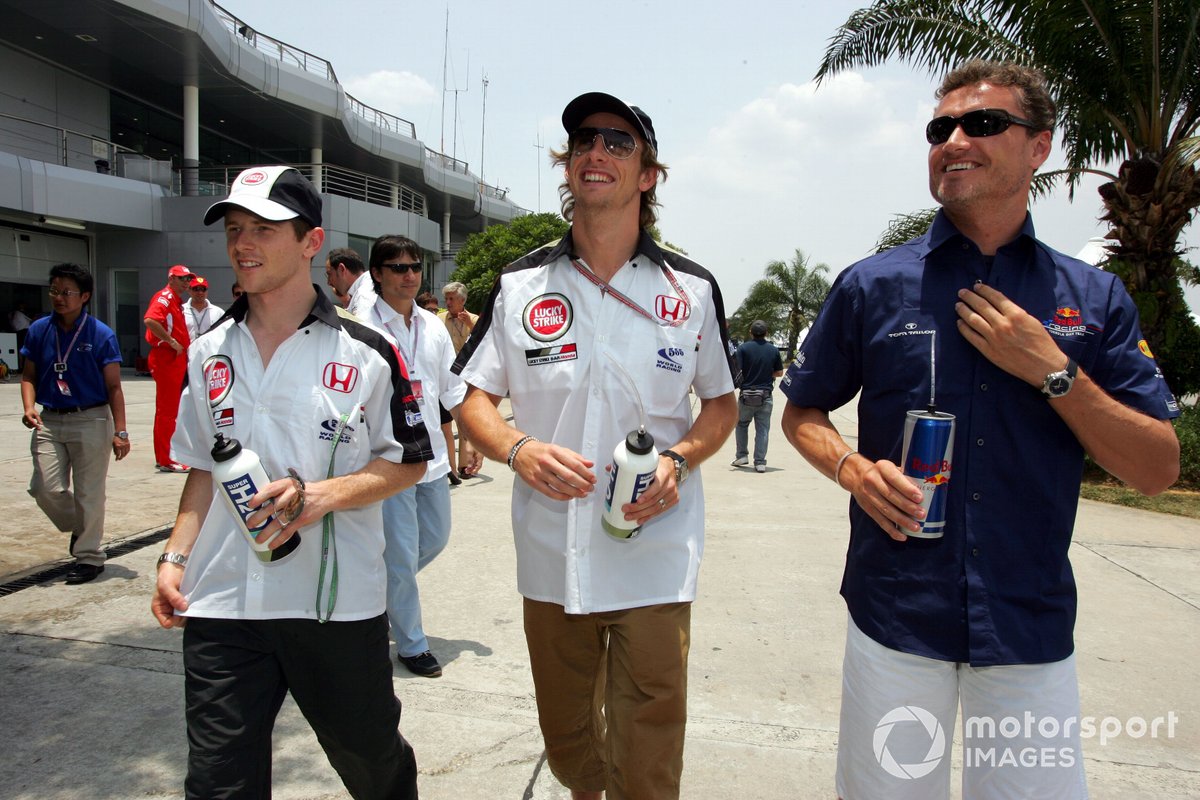 Despite being direct rivals, Davidson and Button remained good friends throughout their careers

Having done “many, many tests alongside him at Honda”, Davidson has a good grasp of what made Button a success, and admits that he learned from his approach to driving that generation of car effectively.

“He was always a driver that focused more on exits, he would carry quite a lot of minimum corner speed but also somehow managed to get a very good exit as well,” says Davidson. “He always kept it clean, always used all of the track, so I learned a lot from him in F1.

“Those kinds of cars we were driving on the grooved tyres, you had to keep it quite smooth, so in many ways I had to adapt my style to become a bit smoother and emulate what he was able to achieve. I was a bit more of an aggressive driver, demanded even more from the front tyre in the mid-corner of the slow-speed to point and squirt it rather than roll the car through the corner.

“If you could roll the car more through the corner, and not get your foot down so rapidly and lean heavily on the traction control, it could be a benefit sometimes. Driving a bit more aggressively could sometimes trigger the TC to kick in too early because you were sliding the rear and the system would, rightly so, try to hold back that slip from the rear tyre.

“He was quite good at not relying on the systems there too much, that would then get over-excited and actually slow you down more as a result. I think that’s what made him good at preserving tyres as well, in the future when the Pirelli rubber came along. I saw it all the way through our karting, he was always smoother. It suited that type of car really well and especially on the grooved tyres.”

Davidson remains a colleague of Button’s today through their Sky television work, and says he “never changed”.

“He’s still the same bloke that he was back when we were in karting and I think that’s what was so refreshing about him,” says Davidson. “Now we’re even working at Sky together, so I can’t get away from the guy! It’s always been a nice relationship with us two, always a lot of respect there.

“I was learning from him as quickly as I could that weekend in Sepang and he was obviously a real big help. He was always incredibly quick, and a great reference for that one weekend.” 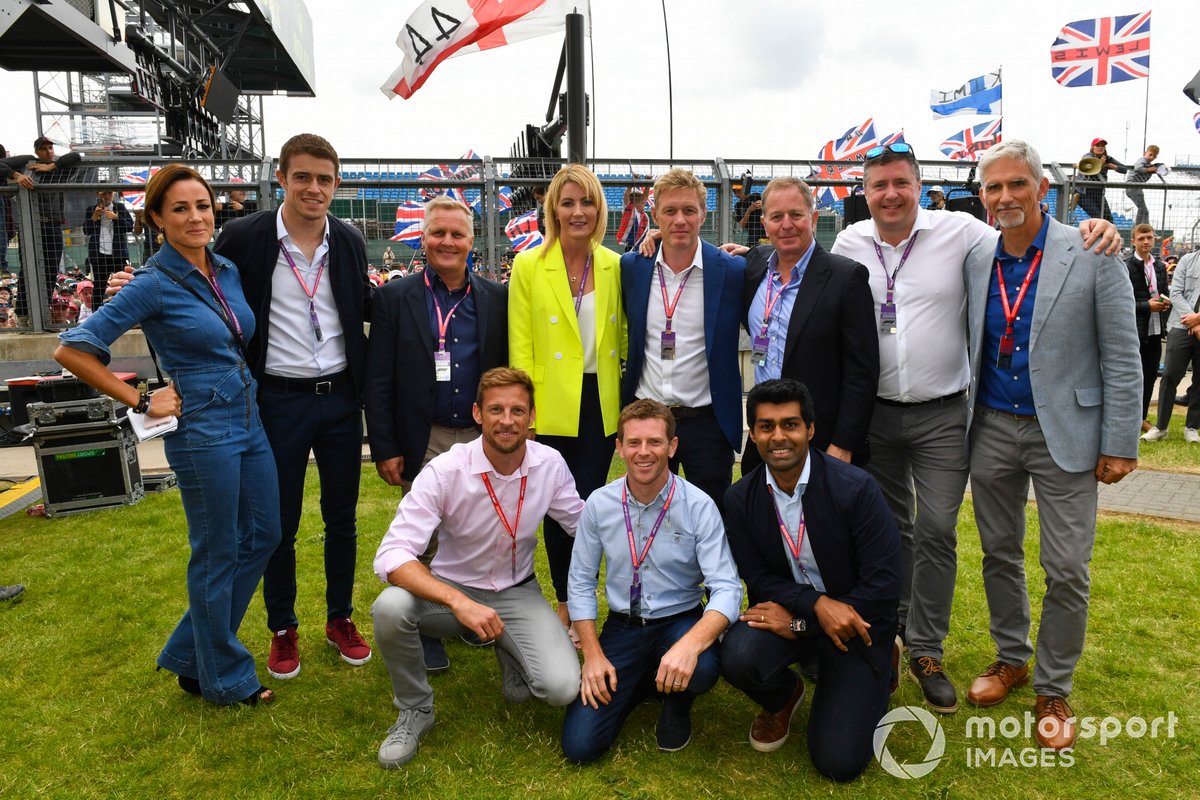