Mercedes Formula 1 driver Valtteri Bottas set the pace in final practice for the French Grand Prix, which was mostly devoid of action after unexpected rain

Bottas set a 1m33.666s in the first round of flying laps in the opening five minutes, more than a second slower than team-mate Lewis Hamilton's Friday benchmark.

A wet FP3 was not predicted after Friday practice took place in hot, sunny conditions, however rain started to fall at parts of the circuit shortly after Bottas set his time and Sergio Perez skated off the road at Turn 4 as the track got more and more slippery.

By 10 minutes-in rain was falling across the entire circuit, and the teams ordered their drivers back to the garage - with no action for another 40 minutes.

Renault's Carlos Sainz Jr and Sauber driver Charles Leclerc managed to get a representative lap in during the initial three-lap runs, improving on their FP2 times, to go second and third behind Bottas.

Drivers from Fernando Alonso in fourth down to Kimi Raikkonen in 13th all set times, but at nothing like the sort of pace shown on Friday.

The track remained silent until the very end of the session, despite F1 sporting boss Ross Brawn telling Sky Sports F1 that qualifying is expected to feature a "heavy thunderstorm" and the race will also be wet.

This lack of running is probably explained by teams not wanting to waste the limited number of tyres they have for qualifying and the race. 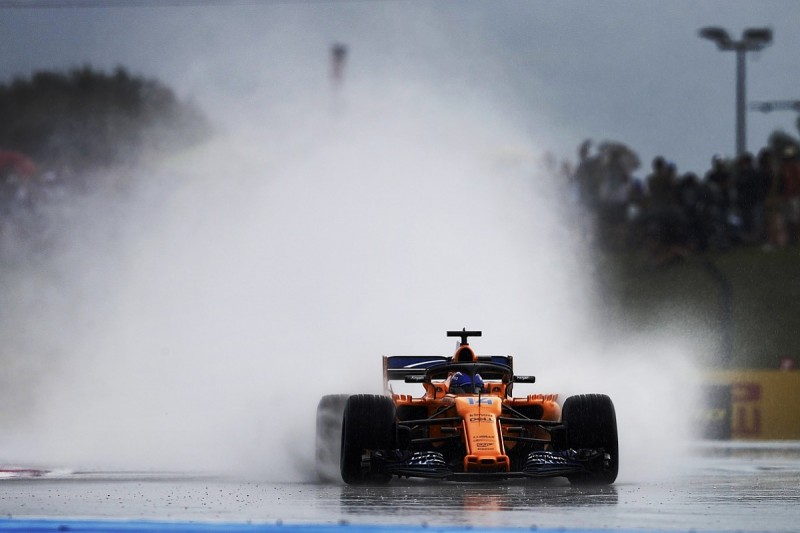 The FIA did not make an additional set of intermediate tyres available to each driver for FP3 because it did not expect it to be a wet session.

Alonso was the first driver to head out onto the track on full wet tyres with just over 10 minutes to go.

He returned to the pits immediately before Williams drivers Sergey Sirotkin and Lance Stroll managed to complete one flying lap each on the extremely wet circuit.

Stroll went wide at Turn 7 while Sirotkin went straight on at the Turn 8 chicane but they at least set a time, albeit 28 and 30 seconds off the pace respectively.

The Haas drivers, Brendon Hartley, Nico Hulkenberg and Max Verstappen ended the session without a time to their names.

Hartley completed just an outlap and an inlap as he shook down the new Honda engine he has had to use after a Friday failure, which has also condemned him to a back-of-the-grid start.

Hartley and his Toro Rosso team-mate Pierre Gasly joined Leclerc and McLaren's Stoffel Vandoorne in heading out in the final couple of minutes to explore the track and scrub in a set of wets.

Marcus Ericsson did not join Sauber team-mate Leclerc on-track late on and managed just three laps in his new chassis, required after a fiery FP1 crash, at the start of this session.