Formula 1 tech analysis: how wet is too wet?

The decision to pause Brazilian Grand Prix qualifying for 40 minutes due to the rain caused some controversy, especially as conditions were soon appropriate for intermediate tyres when running resumed

But while many fans and pundits questioned whether Formula 1 was now playing it too safe in wet conditions, leading drivers insisted the right call was made.

AUTOSPORT technical expert Craig Scarborough explains the factors that decide when a wet track is too wet for F1 running.

Running in the wet can only be allowed up to a certain point for safety reasons. The biggest danger for drivers is aquaplaning, where the amount water on the track forms too big a barrier under the car.

Unlike aquaplaning in road cars, with a F1 the water can build up both between the tyres and track, and between the car's underbody and the track.

In either case the grip between the tyres and track is lost as the car effectively runs on a film of water rather grippy asphalt - and there is no driving tactic to regain control once you start aquaplaning.

An added risk when the car loses control from aquaplaning is that it does not lose as much speed as it slides towards the barriers, particularly when travelling over wet grass, which means resulting impacts are far greater.

F1's grooved tyres are designed for damp to wet conditions, and the cuts in their surface can clear 60 litres of water per second at full speed, although Pirelli does not produce an extreme weather tyre for monsoon-like conditions, as some of its predecessors did.

Even with this ability to clear huge amounts of water, there is still a threshold above which the tyres cannot shift the water sufficiently to maintain grip.

This can occur either through sheer voume of torrential rain, or isolated puddles or rivers of water across the track. The latter two circumstances can mean drivers lose control at certain points on a track that might otherwise be largely dry. It's this unpredictability that drivers worry about. 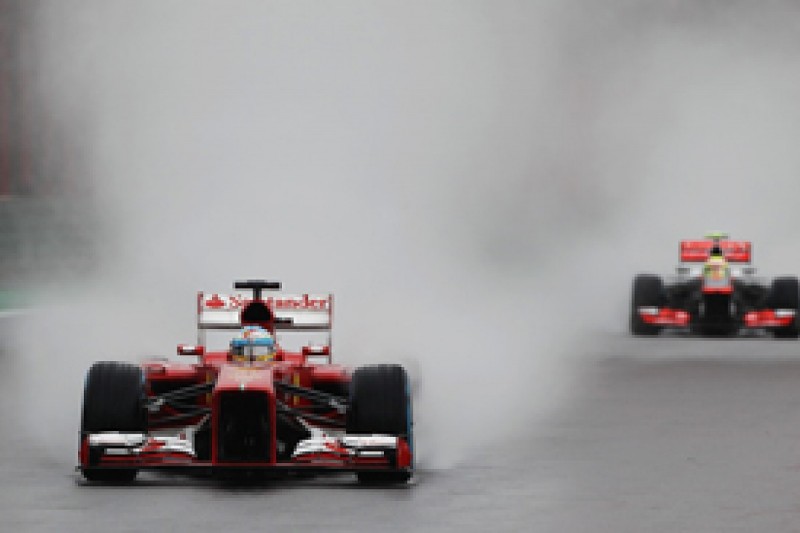 The other risk from aquaplaning is where the car is literally lifted off the track by the barrier of water between the track and its underbody.

F1 teams mount a skid block, commonly termed a 'plank', under the car. They aim to run this plank as close to the ground as possible for aerodynamic reasons, and with such little ground clearance the risk of aquaplaning increases.

Fortunately the wet weather tyres are partly designed to cope with this, being some 10mm bigger in diameter. This increases the car's ride height by some 5mm.

Teams may well still want to increase ride height even more in the wet to lessen the risk of plank aquaplaning. This will, of course, come at the expense of downforce generation under the car, but in the wet aerodynamics become far less of a concern.

Mercedes team principal Ross Brawn stress that even if the cars were better able to handle wet conditions, visibility would still be a problem.

"It is not just tyres, it is visibility," said Brawn.

"There are things you can do to reduce the chance of aquaplaning, you can run some very tall, narrow tyres but the visibility is still an issue.

"Luckily, it [rain delays] doesn't happen too often but that is the consequence of an open-cockpit formula."