Having set the pace in the first session, the Red Bull driver used a set of hypersoft Pirellis to knock Ferrari driver Kimi Raikkonen off top spot just after the halfway mark of the second 90-minute session at the Circuit Gilles Villeneuve.

His time of 1m12.198s, set on his first flier on the hypersofts, was 0.130s faster than Raikkonen. Raikkonen set his time on his second flier on hypersofts a few minutes earlier, which put him ahead of Mercedes driver Lewis Hamilton.

But the pace of Mercedes drivers was misleading because neither Hamilton nor Valtteri Bottas, who finished the session fourth and sixth, used the hypersoft thanks to having only five sets available each.

The Red Bull driver spent much of the session in the pits after completing four laps early on. During that time, the team completed significant work on an electrical problem before he returned to the track on hypersofts in the final 10 minutes.

This allowed him first to take fourth, then improve to third on his second flier.

Hamilton's time was posted early in the session using supersofts, and he was unable to improve after switching to ultrasofts for his next run.

This was still enough for fourth overall, a couple of tenths ahead of Sebastian Vettel, who missed the first part of the session because of a problem that arose at the end of free practice one.

After a run on supersofts, Vettel went out for his qualifying simulation on hypersofts with less than half-an-hour remaining, taking fourth with his first flying lap. He then improved to a 1m12.985s on his second flier, putting him just two-tenths behind Hamilton, only for Ricciardo's late lap to push him down to fifth.

Unlike his team-mate, Bottas did improve on ultrasofts, posting a 1m13.061s, which put him almost three-tenths behind Hamilton.

Romain Grosjean, driving the upgraded Haas, was seventh fastest using hypersofts, ahead of the Force Indias of Esteban Ocon and Sergio Perez, who were separated by just seven-thousandths of a second.

Fernando Alonso was 10th, although his time was set on the ultrasofts and was just enough to put him ahead of Sauber's Charles Leclerc.

Leclerc suspected he could have gone faster on his qualifying simulation run, but for a lockup and a brief off.

Brendon Hartley, whose F1 future is up in the air after it emerged the Toro Rosso team made a bid for McLaren protege Lando Norris, was 12th and 1.691s off the pace.

Kevin Magnussen pipped Renault's Nico Hulkenberg to 13th, with Hulkenberg missing the first 15 minutes of the session while the team completed work on a gearbox change after a problem in free practice one. 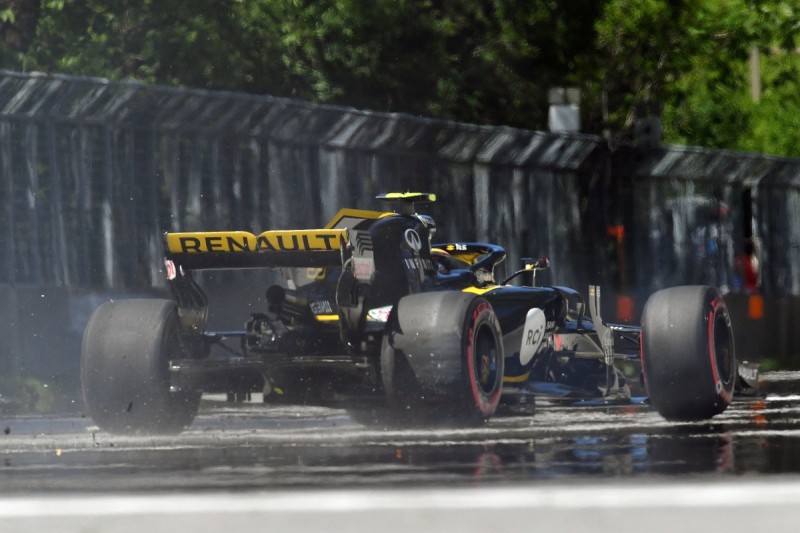 Hulkenberg's team-mate, Carlos Sainz Jr, was not able to be in this battle after spinning into the wall coming out of the Turn 6/7 left/right flick shortly before the half-hour mark.

Although Sainz was able to limp back to the pits, the red flag was deployed for six minutes to allow debris to be cleared.

Sainz ended the session 17th, one place behind the McLaren-Renault of Stoffel Vandoorne, whose session came to an early end after clipping the wall with his right-rear.

"I touched the wall, I broke the suspension," reported Vandoorne while attempting to recover to the pits before being told to stop to avoid the risk of damaging the floor thanks to the flailing tyre.

Vandoorne parked on the grass to the right of the track on the run out of the hairpin, leading to the virtual safety car being deployed for seven minutes.