Perez recovered from a first-lap pitstop to fit a new nose to his car in Baku to finish third, which is the fifth time he has achieved that result since joining Force India in 2014.

"Obviously, this result is a coincidence of so many things happening, but it's not a coincidence that we are always there to take anything that is offered to us," said Perez.

"Our battle is not here, to be honest, it's the midfield and finally we got plenty of points today with this podium, [and] we can close up the gap to the cars ahead, to the Renaults.

"We were definitely the fourth best team this weekend."

Force India deputy team principal Bob Fernley said the team got its strategy right in Baku, especially when Perez went for new supersofts rather than used ultrasofts for the final charge to the flag.

"At the end of the first lap I was feeling rather despondent," he told Autosport. "I thought here we go again!

"But what I did like was that it was a very, very constructive process to bring Checo up through the field.

"We used the tyres well, got everything in place, used the pace of the car. 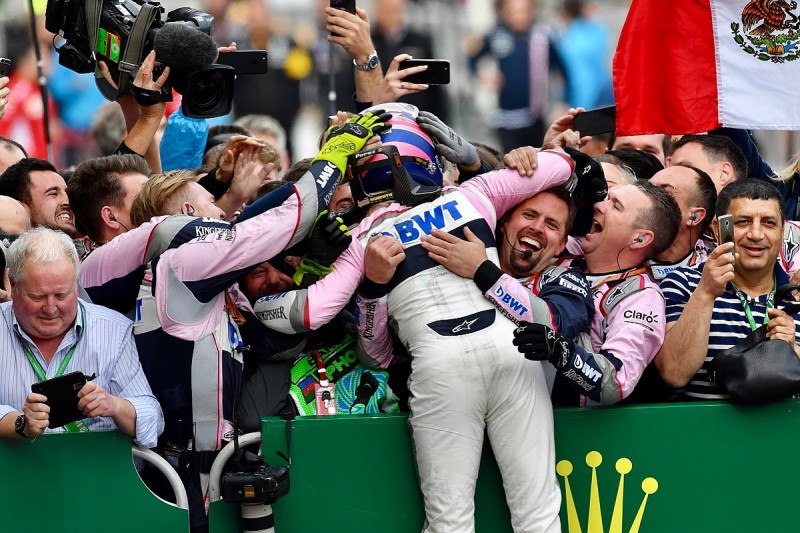 "We were genuinely the fourth quickest team out there, and we were able to pick them off one-by-one.

"We genuinely got ourselves back into contention again, and then obviously the incidents that followed played into our hands, plus a great opportunity to overtake.

"The other thing that you need to recognise is that we were only team at the last pit stops to go onto supersofts.

"We felt we could be a better warm up, and that possibly played into Checo's hands with the Vettel overtake, getting the temperature into them when the weather's cold.

"What you saw was an incredible team effort across the board.

"It wasn't just the guys doing the pitstop, the pitwall was amazing - the calmness on the pitwall to bring him all the way through."

Regarding Esteban Ocon's first lap retirement after a clash with Kimi Raikkonen he added: "I think it was a genuine racing incident.

"Perhaps Esteban could have left a bit more room, perhaps Kimi was a bit optimistic coming up the inside on a dirty track on cold tyres.

"For Esteban the sad thing was that Kimi ended up on the podium and he was sat in the garage."