The change, which has meant the reduction in size of a long-standing gravel trap (pictured from last year), fuelled widespread criticism on social media with fans unhappy that it appeared to rob the corner of some of its challenge.

GP2 race winner and Ferrari junior Raffaele Marciello even posted a picture on Twitter (below) saying: "Why?"

F1 race director Charlie Whiting has revealed, however, that grand prix drivers had asked for the changes to be made.

Although accepting that the modifications may not be as challenging as before in terms of punishing mistakes when drivers run wide, he says both the FIA and drivers think improved safety justifies the tweaks.

Whiting said: "About 35 per cent of the gravel has been replaced.

"This has been requested for safety reasons by the FIA and the drivers, just as it has been at virtually every other circuit that F1 races on. 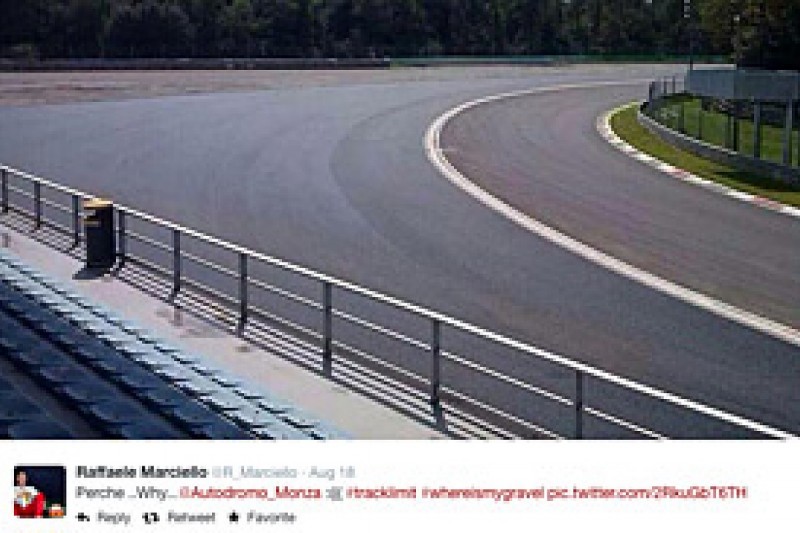 "Of course we know that it is not as punishing to a driver who leaves the track but that is the price that we pay for much improved safety: a price both the drivers and I believe is worth paying."

Lotus's Romain Grosjean believes that the removal of the gravel trap at Parabolica will allow drivers to find the limit much quicker because there will be no fear of a big crash if they suffer problems there.

"Parabolica is a very challenging and quick corner so from a safety point of view it is a good thing to have some more margin for the drivers," he said.

"I remember sometimes in the past coming in to the corner and knowing that to brake even a little bit too late then you could be straight in the gravel and then straight to the wall at high speed.

"I think that now what you will see is the drivers finding the limits sooner, because we know there will not be the big gravel and crash penalty like previously."