Following his Mugello victory, Hamilton wore a t-shirt on the podium carrying the message: "Arrest the cops who killed Breonna Taylor", the black medical technician who has become a focal point in US anti-racism campaigns after she was shot by Kentucky police in March.

Hamilton's gesture led to a review by the FIA of what the guidelines should be for the podium ceremony.

The new protocols were outlined in the Russian GP version of the post-race procedures that are issued by FIA race director Michael Masi every Sunday morning.

For Sochi, a newly inserted paragraph reads: "For the duration of the podium ceremony and post-race interview procedure, the drivers finishing in race in positions 1, 2, 3 must remain attired only in their driving suits, 'done up' to the neck, not opened to the waist.

"For the avoidance of doubt, this includes a medical face mask or team branded face mask."

The new directive also applies after the podium ceremony for the duration of the TV pen interviews and FIA post-race press conference.

On Thursday, Hamilton said he had yet to discuss the Mugello t-shirt with the FIA, but he anticipated that there would be a ruling.

"This is a learning process for everyone, because people have been happy with the norm here, of how life and society has operated," he said. 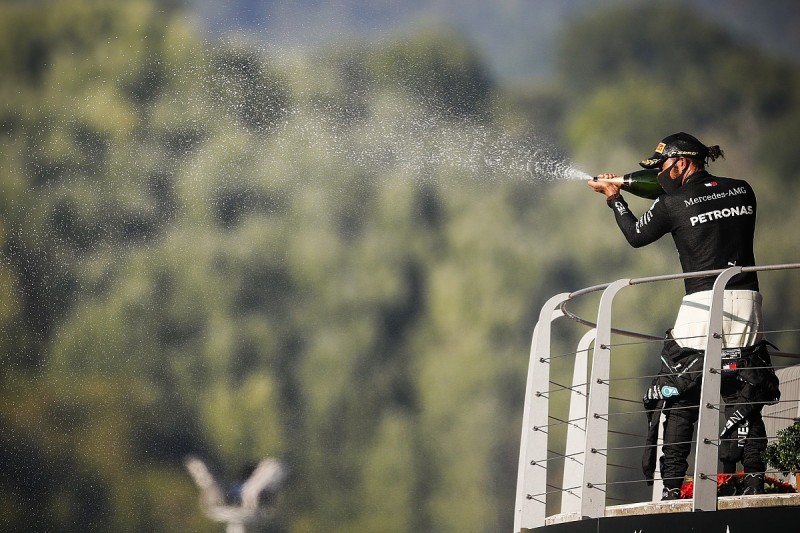 "But ultimately, the world, and the younger generation particularly, is more conscious that things aren't equal and change is needed.

"So it does take conversations with people and things like Mugello happening for people to spark a conversation that perhaps would never have taken place if it didn't happen."

Masi's directive also informs drivers how to greet the VIPs involved in the Russian GP podium ceremony, the first time dignitaries will be involved in 2020.

"One dignitary will present all four trophies," Masi wrote.

"Four other dignitaries will be present on the podium but will not participate in the presentation.

"If a handshake is offered by the dignitaries, drivers should kindly offer a 'fist bump' to acknowledge the gesture."

In a small change to the pre-race procedures, which already specify that drivers should wear the official anti-racism t-shirt, a line that previously said a gesture could include "anything else a driver may feel comfortable to do" has been deleted.

Horner: "One of his best laps this season" for Verstappen front row at Russian GP