Vettel finished second to Bottas by 0.658 seconds after the Finn held the lead from pole at the start, which stewards investigated but took no action against.

The Ferrari driver said that he was certain Bottas had jumped the start lights, but also accepted that the stewards are the ones who judge the legality.

"From my point of view, he jumped the start - I was sure that he did," said Vettel.

"It looked like it from inside the car, but it's not for me to judge at the end of the day.

"[My start] was quite tricky for me to keep standing still. it was OK, a bit of wheelspin early on."

When asked to clarify why he believed it was a jump start, Vettel described Bottas's getaway as "unhuman".

"Normally, the reactions are 0.2s for everyone, so I don't believe everyone was slower today.

"So that is why I don't believe Valtteri was so much quicker.

"I was a strong believer that he jumped the start, but it turns out he didn't - that is why I don't believe it.

"His start was unhuman." 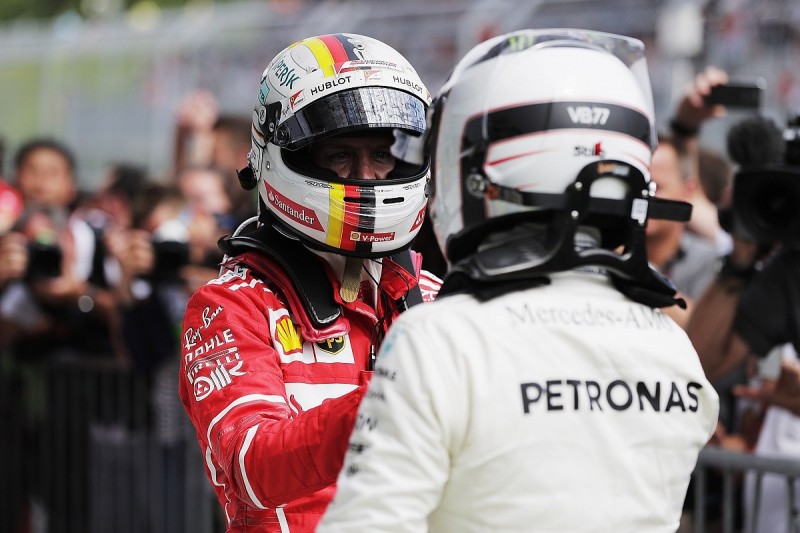 Bottas described his getaway as the best of his life.

"I think that was the start of my life, I was really on it today," he said.

"When the car was moving, the lights were off - that is the main thing."

Bottas admitted that there was an element of gambling on correctly anticipating the start.

"[With] the start lights, there are different variations since the lights are on and go off, but the variation for a long time has not been massive," said Bottas.

"So you know more or less the zone when it is going off, so gambling with your reaction and guessing sometimes you get a mega one, sometimes you are a bit late.

"Today was my best reaction for the lights. As long as it is positive [in terms of time after the lights go off], it is fine."

Daniel Ricciardo, who started directly behind Bottas, also said it looked like Bottas jumped the start and that the Mercedes driver was lucky to time his getaway to be legal.

"The main this it was positive, but the lights were held for a long time, more than normal," said Ricciardo.

"There is always a window, but it seemed longer and you are waiting, waiting and he went but the lights went out - I guess he got lucky.

"I did it in F3 once, and it was on the edge, you react but at the same point the lights went out. In theory, that's not a natural reaction.

"But I don't believe he reacted to the lights. I said it looked like Valtteri jumped - he didn't jump because it was positive - but for sure he got a bit lucky."

Mercedes technical director James Allison confirmed the start was legal and was in keeping with the longstanding reaction time deemed permissible by the FIA.

"The rules have been like this forever so it's just the way it's always been," Allison told Sky Sports F1.

"He was positive at the start, not negative, so it's a fair start."