Kimi Raikkonen does not believe Ferrari's latest changes to its Formula 1 start system, including new clutch paddles, make enough of a difference to make him want to use it

Autosport revealed during the Spanish Grand Prix weekend that Ferrari has adopted Mercedes-style finger holes behind the steering wheel on Sebastian Vettel's SF70H, in a bid to help improve starts.

Raikkonen, however, has so far stayed with the original, long single wishbone paddle that has been used since the start of the 2016 season.

The Finn feels Ferrari has "made progress" with its starts, but does not believe there is much benefit from the finger-hold concept.

"Obviously we have some things to work on but I had a very good start in the last race [at Barcelona]," he said.

"I got blocked quite a few times on the straight and then obviously it didn't end up very well, but for sure we've improved and we can still improve.

"It's pretty much a never ending story with the starts and little things around that area, but we were quite OK.

"[Vettel and I] run slightly different configurations but I don't think it really makes any difference to the actual start." 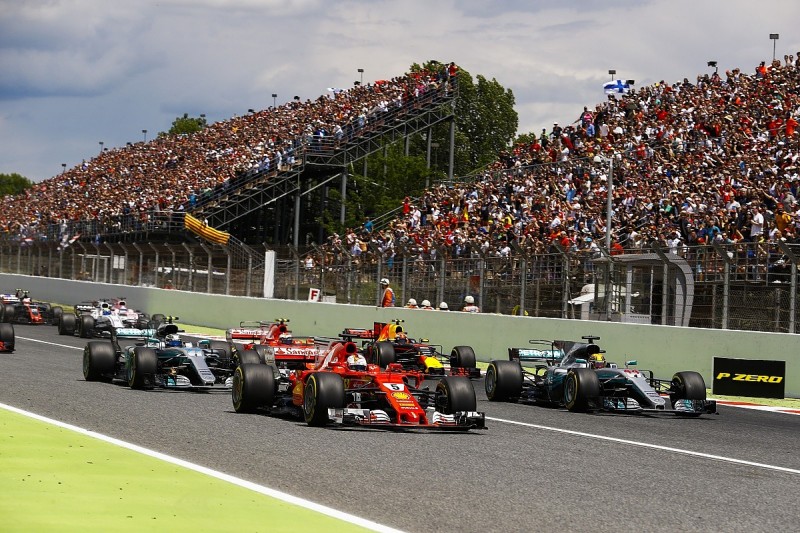 Vettel says the latest change is aimed at giving more more feel, and that it helped him readjust the clutch position after experiencing some wheelspin when the lights went out at Barcelona.

"I saw Lewis [Hamilton] struggling with wheelspin and so did I, but then I pulled the clutch in immediately and reacted and tried to set off a second launch phase, which worked excellently," he said.

"We tried a lot of things and sometimes you have a better feel and sometimes less. Whatever we tried we had decent starts. I think it is true that our starts historically have been very good.

"This year you can forget about history as it is a completely different approach, but we still managed to get good starts.

"The beginning of the year was a bit wobbly but it seems to get more consistent. But it is also natural that a bit more practice, routine, you get better in whatever you have to do.

"And I am happy to play around with the design layout to try to give me more feel and better control of what I need to do."