Ferrari: Mercedes not used to this much pressure in F1 title fight

Ferrari needs to take advantage of its Formula 1 rival Mercedes not being used to this much pressure in the title fight, according to the Scuderia's team boss Maurizio Arrivabene

Sebastian Vettel's victory in last weekend's Belgian Grand Prix cut Lewis Hamilton's lead to 17 points after he was thwarted in the previous two races despite Ferrari appearing to have a faster car.

Speaking at the Milan F1 Live demonstration in the build-up to this weekend's Italian Grand Prix at Monza, Arrivabene said Ferrari must throw the sort of punches it has taken time after time from Mercedes since the V6 turbo-hybrid era began in 2014.

"They are not used to it," said Arrivabene. "In the last few years we were with our heads held low, we took punches right and left, but we always got up.

"We're used to it. They are not, so the speech made to the boys is simple: let's keep them under pressure.

"Sooner or later, when we reach them [Mercedes], we are the aggressive ones who have taken them [the punches] and we know how bad it is. 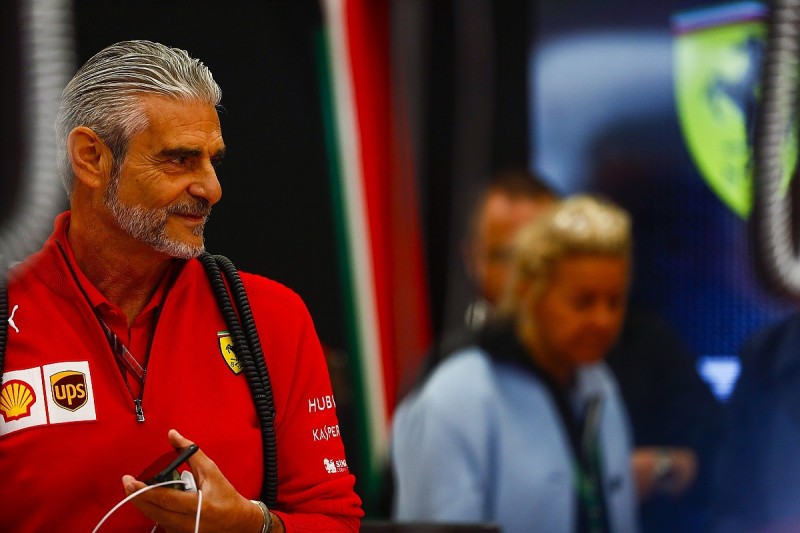 The momentum in the F1 title battle has swapped between Mercedes and Ferrari this season, with Hamilton and Vettel level on five wins after 13 races.

Mercedes currently enjoys a 15-point lead over Ferrari in the constructors' championship to go with Hamilton's advantage in the drivers' contest.

However, Ferrari arrives at Monza as the pre-race favourite after Vettel's Spa win, with its engine upgrade appearing to trump Mercedes' as both manufacturers introduced new specs last weekend.

But Arrivabene cautioned that his team cannot get carried away just because of one victory.

"It's a recovery but we're still behind," he said.

"We have to put this in our heads that if you win a race, you have not won the championship, and that is our goal.

"We must put pressure on Mercedes, who are not accustomed to it."