While Alonso did not drive a car in the event he was one of a 19-strong driver line-up signing autographs and taking pictures with fans, with only Lewis Hamilton absent.

Alonso also witnessed the demonstrations carried out by several drivers, including championship leader Sebastian Vettel in a 2015 Ferrari SF15-T and Valtteri Bottas in a 2015 Mercedes F1 W06.

"It was good," said Alonso. "Especially the last couple of laps, when all the cars were in the street together.

"Obviously it helps, the noise of the V8s, the old cars, to make a better show.

"For many people there it was the first time they watched F1.

"That was the main purpose, to engage new people, and to show what F1 is.

"Hopefully this is the first of many of these events."

Alonso said it would be "more interesting in countries that don't have the possibility" of going to a grand prix but believes it would be difficult to improve on the initial offering, which also featured live music performance.

"If you want to make it bigger, and a bigger circuit, more things, I think the impact on the cities is maybe too much," he said.

"Maybe a small competition was welcome, one timed lap or elimination or something like that.

"It was already a lot. No one missed anything yesterday, to be honest, it was fantastic." 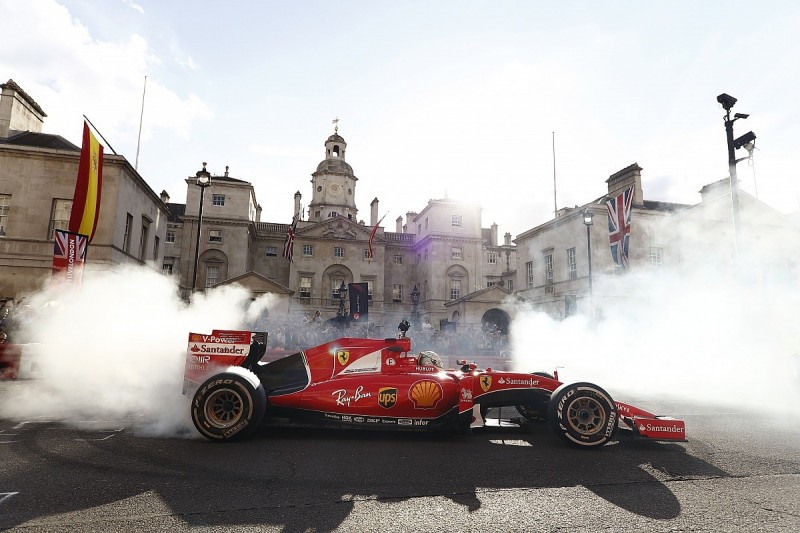 Vettel also received a good reception, despite his fierce battle for the championship with Hamilton and his Azerbaijan Grand Prix aggression.

"It was something unique, to have central London partly shut down to have us running up and down," he said.

"It's always nice to get close to the people and most of them seemed to be very excited."

"It's not many times in your life you get this kind of opportunity.

"It turned out to be a great event, a fun event for us as well as for the people, so I guess that's a win-win."

"Usually when we do something driving-wise, the shows are done by the team or sponsors,: said the Finn.

"Everyone was involved, more or less, here. it was something different than we have done before.

"A lot of people haven't had a chance to come and see.

"They get very close, it's not high speed but you can feel the atmosphere."