The two-time F1 world champion was heard lambasting Honda's straightline speed over team radio, comparing it to a "GP2 engine".

Having finished 11th, he explained his comments as frustration at racing with drivers and cars that seemed much slower in corners but that overtook him on the straights.

"I feel embarrassed when I'm racing sometimes because it's frustrating when you see the other cars making mistakes, going off the racing line, getting sideways," said Alonso.

"You look in the mirror on the straight to look for them and they are already side by side with you.

"The deficit we have on power is like another category.

"It's tough to race like this and it's frustrating, but on the positive side both McLarens finished the race so hopefully we have some useful information from that mileage.

"Next year we must change a lot of things on the power unit and on the structure so it will be a medium-term job and for next year, not the next races."

On Saturday Alonso dismissed suggestions from his former manager Flavio Briatore he would be looking for a drive outside F1 if McLaren's form did not improve. 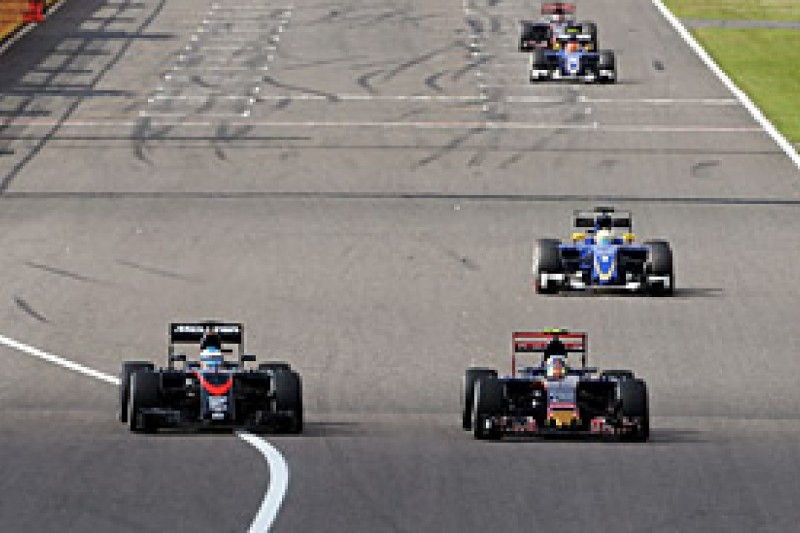 After the race, when asked directly if he would be in F1 next year he answered: "I don't know, there are still five races to go now and I think we need to improve the situation and make sure we are competitive and on top of our problems."

However, he then added: "Next year is what we are looking for and my intention is to stay and win."

Asked if he had been trying to send a direct message to Honda with such public criticism at its home race, Alonso replied: "I think they know, there is no need to say any messages".

He reiterated his belief that the Honda project will come good given time.

"I think this is the only team that can challenge Mercedes in the near future," he said.

"But right now it's tough times because we don't have the toys to fight with them.

"Everyone is making sure we know the problems and we are deep into the solutions that we will find for next year.

"I'm optimistic. The first results of next year seem OK so let's wait and see."

Japanese GP: Rosberg 'had to avoid collision' with Hamilton