Max Verstappen held off a charging Lewis Hamilton to win Formula 1’s 2021 US Grand Prix, as their teams diverged on strategy after Hamilton took the lead at Turn 1.

Red Bull had to use an undercut strategy to get Verstappen back in front, which meant Mercedes later left Hamilton out longer to set up an attempt at sealing a last-gasp victory.

At the start, Verstappen and Hamilton launched in unison but the Mercedes accelerated much better and the pair were almost immediately side by side as the began to climb the hill to the Turn 1 left-hand hairpin.

Verstappen squeezed Hamilton over the pitlane exit line to the inside edge of the track, but the world champion had the line and was able to steal ahead at the Turn 1 apex.

The Red Bull driver hung over around the outside line but was shown to the edge of the track in turn by Hamilton, who raced clear into the lead as Perez surged alongside Verstappen, who had to rejoin from off the track.

Perez conceded ground his team-mate into the Turn 3 left that starts the Esses complex in the first sector as the pack charged after the leaders – only Lance Stroll and Nicholas Latifi adrift at the back after F1’s two Canadian’s touched at Turn 1 with the Aston Martin driver spun around in front of the Williams.

The top three immediately pulled clear of Charles Leclerc’s Ferrari in fourth – the trio able to run in the high 1m41s while the rest were at least a second slower in the early tours of the 56-lap race. 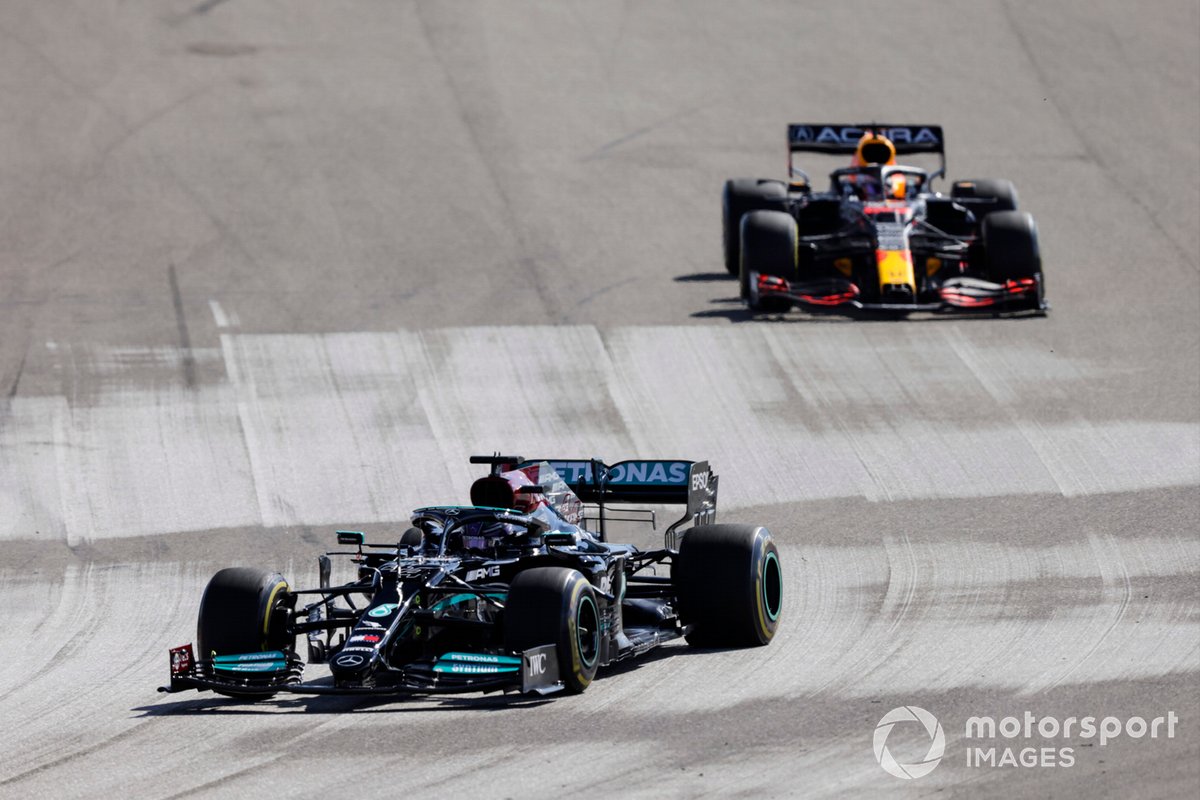 Hamilton and Verstappen also edged clear of Perez, with the leader holding a lead of just under a second throughout the opening 10 laps – during which Verstappen insisted to Red Bull that he had pace in hand and that Hamilton was “sliding a lot”.

Hamilton confirmed to Mercedes that his rival was indeed quicker, but, as the pair pulled further clear of Perez when the Mexican dropped back to the 1m42s, he continued to hold the advantage.

On lap 10 Verstappen told Red Bull he suddenly found himself sliding more and not going as fast as he had been before and at the end of the tour, he was brought in to switch the mediums all the leaders had started on for hards.

Verstappen carved his way by the yet-to-stop Daniel Ricciardo, running behind Leclerc, on his outlap, with Mercedes opting not to bring Hamilton in immediately to cover his rival.

With Verstappen lighting up the timing screens with a string of fastest laps, the Dutchman urged Red Bull to use Perez’s strategy aggressively with a second undercut to stop Mercedes leaving him out for a long first stint.

When Red Bull did just that by pitting Perez for a second set of mediums at the end of lap 12, Hamilton was indeed called in at the end of the following tour, with Verstappen moving back into the lead easily when the Mercedes re-joined.

Verstappen therefore found himself with a six second lead that he maintained over the next phase of the race – the leaders now running in the high 1m40s – with Perez 10 seconds behind in third.

Just past the 20-lap mark, Hamilton began to turn the screw as he upped his pace to reach the low 1m40s, which quickly ate into Verstappen’s advantage. 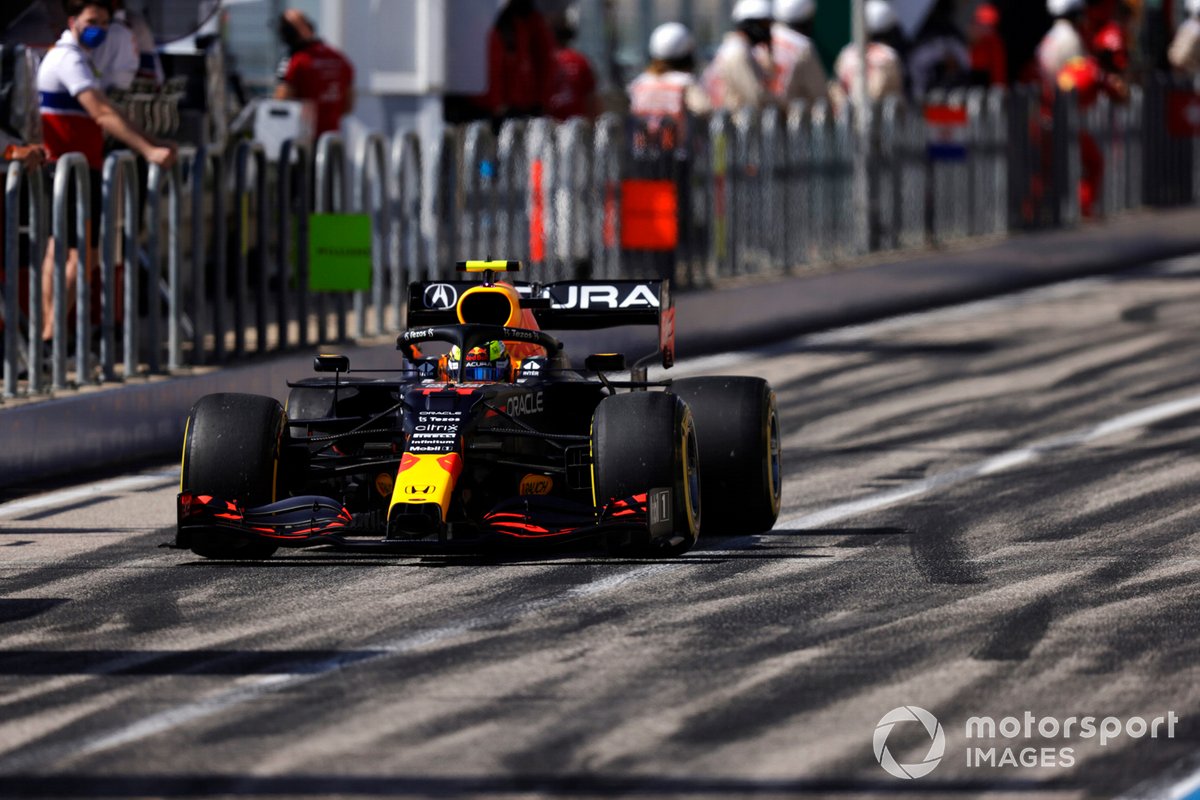 The Red Bull’s lead was soon under three seconds as Hamilton’s three-lap tyre life off-set advantage began to pay off, as Verstappen even slipped back to the 1m41s as he made his way through backmarker traffic.

But Verstappen was able to respond, gaining back a chunk just before the virtual safety car was briefly activated so a piece of debris could be retrieved by a marshal at the entry to Turn 16 – the multi-corner complex leading to the track’s final corners.

Red Bull then went aggressive again with Verstappen’s strategy, calling him in for a second set of hards at the end of lap 29, with Mercedes immediately telling Hamilton he would be running long in response – Perez now far from a threat behind.

Hamilton was left out for an extra eight laps after Verstappen came in for a second time, with Mercedes setting up a significant second tyre life advantage for the end of the race.

When Hamilton exited the pits at the start of lap 38, he had an 8.7s gap to close over 18 laps and during the early phase of that chase he made small gains on his rival, but then upped his pace to reach the 1m38s as Verstappen struggled to lap traffic, with the gap rapidly coming down to 4.8s at the end of lap 42.

Once the pair had both cleared the traffic, with Hamilton seemingly held up less, Verstappen’s lead continued to fall, albeit back to a steadier rate, with his team telling him to make sure he had enough tyre life left to defend against Hamilton coming into DRS zones late in the race.

At the lap 50 point, Verstappen’s lead was under two seconds for the first time, but Hamilton’s gains were getting smaller again as he arrived at the Red Bull’s wake.

The gap stablished for a brief time before Hamilton closed further in with three laps to go – Verstappen’s lead barely a second and with Mick Schumacher’s Haas suddenly a factor as he came to be lapped for a second time. 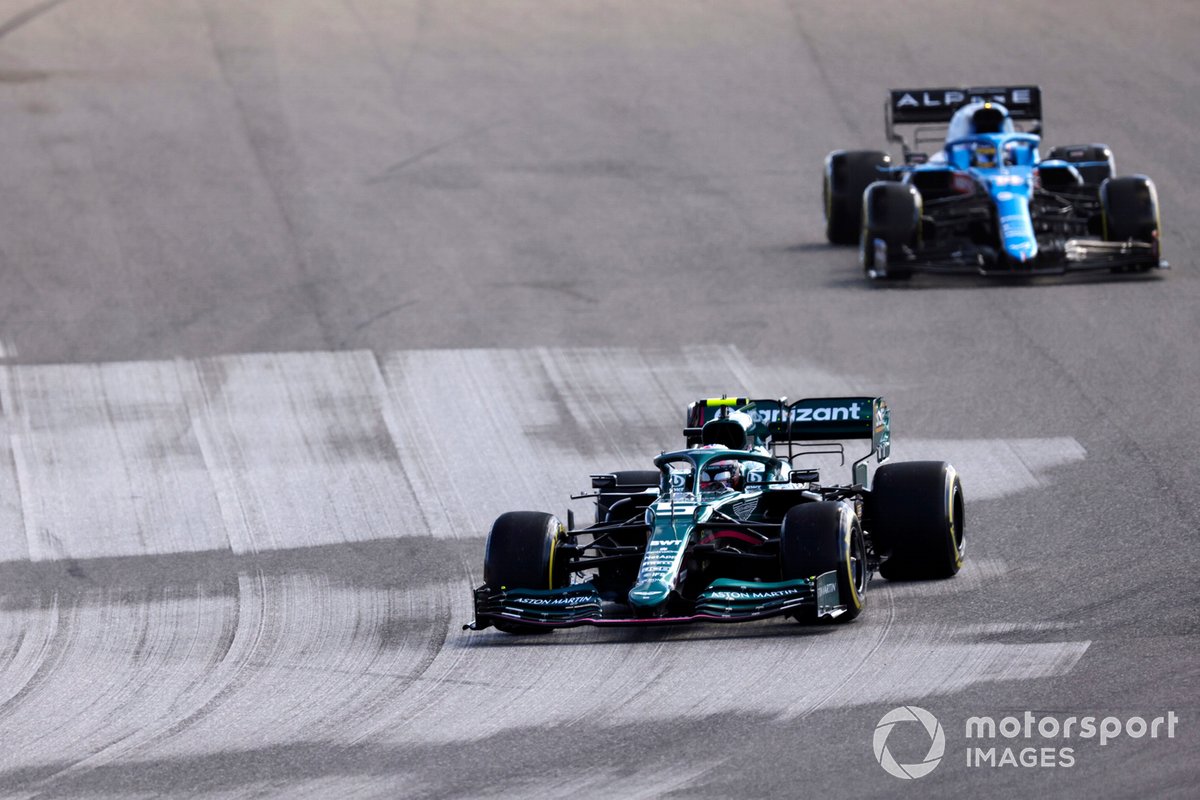 But although Hamilton was just 0.8s behind at the start of the final tour, Verstappen had DRS down the pitstraight as he had been with the detection zone following the Haas at the end of the penultimate lap.

That helped Verstappen pull clear just enough to never let Hamilton had a DRS activation or make a move in battle, with the Red Bull coming him to win by 1.3s.

Perez finished 42.2s behind Verstappen, with Leclerc only 10s adrift of the second Red Bull by the finish.

Fifth place went to Ricciardo after he clashed with the Carlos Sainz Jr late in the race – the pair and Lando Norris also engaging in a thrilling fight on the first lap – while Sainz dropped behind Valtteri Bottas late-on.

Norris took eighth behind his former team-mate, with Yuki Tsunoda, who defied Bottas for several laps mid-way through the race with a series of bold defensive moves, taking ninth.

Sebastian Vettel rose from his rear-of-the-field start, thanks to his pre-event engine change, and the Aston driver claimed the final point after his former Ferrari team-mate Kimi Raikkonen spun out of 10th place with a dramatic spin at the long and bumpy Turn 6 right with three laps to the end.

The only non-finishers were the Alpine pair, who retired in the pits – Esteban Ocon with an unspecified problem at the rear of his car, and later Fernando Alonso after his rear wing “broke up”.

Pierre Gasly was the first retirement when his AlphaTauri’s rear suspension was damaged on lap 12.