Valtteri Bottas set the pace in opening practice for the Formula 1 United States Grand Prix, leading Mercedes to a comfortable 1-2 finish ahead of Red Bull.

2019 US GP winner Bottas edged out Mercedes team-mate Lewis Hamilton by just four-hundredths of a second, while Max Verstappen was almost a second off the Finn’s time in third place.

The opening 10 minutes of FP1 at the Circuit of The Americas were largely lost to a red flag after Fernando Alonso came to a halt at Turn 12 on his installation lap. Alpine instructed Alonso to stop his car as a precaution, but managed to get him back out on-track later in the session.

Hamilton was able to set the early pace for Mercedes on soft tyres, but he was joined at the front of the order by Sergio Perez, who set some quick laps for Red Bull on hards.

Verstappen was able to take top spot briefly on softs with 20 minutes remaining in the session, but his time was comfortably beaten by Hamilton, who went nine-tenths of a second clear moments later.

But it was Bottas who would eventually come out on top as he set a fastest lap time of 1m34.874s on softs, giving him an initial buffer of two-tenths of a second to Hamilton in P2.

While Hamilton would later improve, his time put him 0.045s shy of Bottas’s benchmark, ensuring his team-mate remained fastest when the chequered flag came out.

Verstappen was able to improve his time, but finished the session 0.932 seconds off Bottas as Red Bull struggled to match Mercedes’ pace.

Bottas will be subject to a five-place grid penalty for Sunday’s race after Mercedes opted to fit his car with a new engine ahead of the race weekend.

Charles Leclerc recovered from an early spin between Turns 4 and 5 to end the session fourth for Ferrari, beating team-mate Carlos Sainz Jr by almost two-tenths of a second, with AlphaTauri’s Pierre Gasly following in sixth.

Perez ended the session seventh for Red Bull as his fastest time on hard tyres ended up being his best in FP1 after an effort on softs - almost one second quicker - was deleted for a track limits breach at Turn 9. 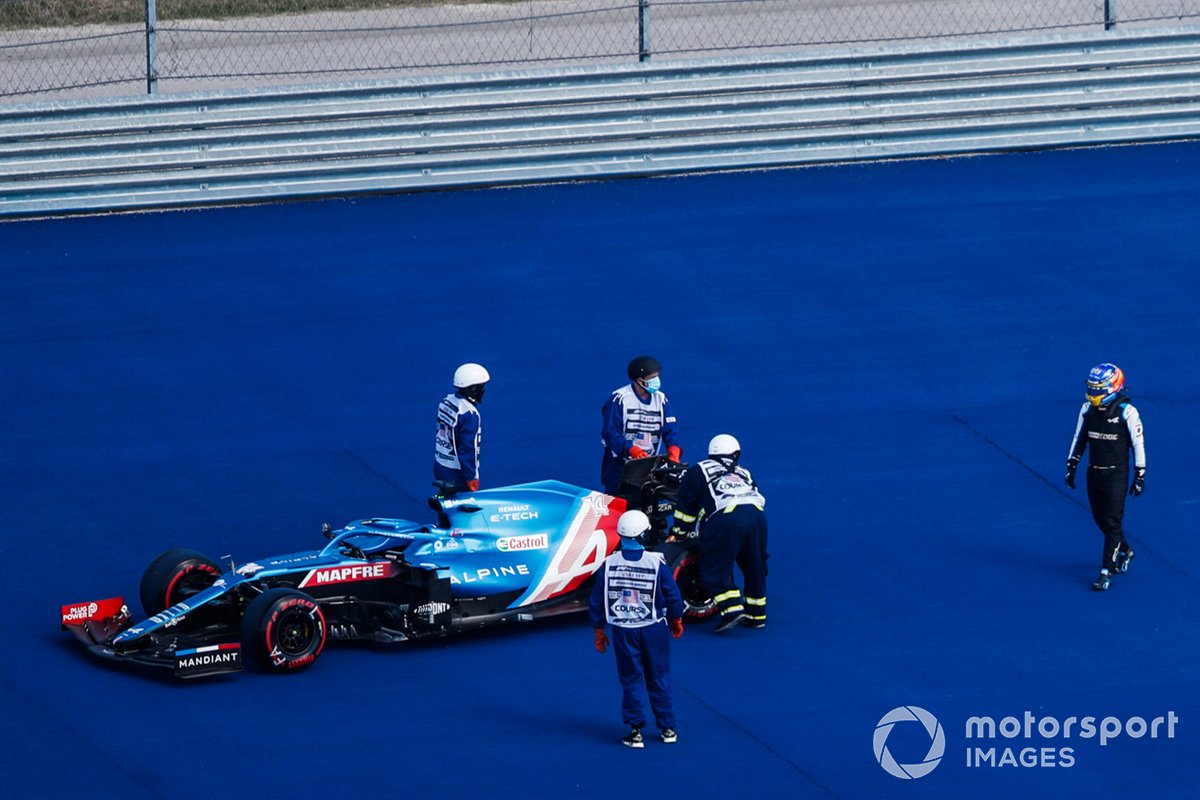 Fernando Alonso, Alpine A521, comes to a stop in FP1

Perez was also involved in a late incident with Mick Schumacher under braking into Turn 12, which is set to be investigated after the session. The two drivers made contact as Perez tried to pass up the inside at Turn 12. Perez called Schumacher an “idiot”, saying that he was “not looking in his mirrors”.

Lando Norris led McLaren’s efforts in eighth place, but saw his hopes of improving on a fresh softs fade at the final corner after locking up and flat-spotting his set of tyres.

Alfa Romeo drivers Antonio Giovinazzi and Kimi Raikkonen closed out the top 10 after both made late improvements in the session.

George Russell took 11th for Williams, having sat as high as seventh at one stage, while Esteban Ocon was left to complete the bulk of Alpine’s running after Alonso’s early issue.

But the Spaniard did return to the track eventually, finishing 15th behind the Aston Martin pair of Lance Stroll and Sebastian Vettel.

Daniel Ricciardo finished 16th for McLaren, lapping six-tenths of a second slower than Norris in the sister MCL35M car, while Nicholas Latifi also failed to match his team-mate’s pace at Williams as he ended the session 17th.

AlphaTauri’s Yuki Tsunoda wound up 18th in the final classification ahead of the Haas pair of Schumacher and Nikita Mazepin, who propped up the running order.