Italian GP winner Pierre Gasly suffered a shock elimination in Q1, which meant he scored his worst qualifying result of the 2020 season so far.

Pole was ultimately settled by the first runs in Q3, as Esteban Ocon's off on his sole run late in the final segment of qualifying brought out the yellow flags.

Therefore Hamilton's 1m15.144s, a new Mugello F1 track record, stood as the quickest time, even though the world champion was running ahead of the incident on his second Q3 run - where he failed to improve.

Bottas was 0.059s adrift of Hamilton's best time after the first run, but he left the pits further behind in the pack compared to his team-mate and abandoned his last lap as he came across the Ocon incident at Turn 3, Poggio Secco, where the Renault driver had dipped a wheel into the gravel and spun off backwards.

Verstappen was able to get a second Q3 lap in and set a personal best, but was still 0.365s adrift of Hamilton, who only got ahead of Bottas for the first time in the weekend when he topped Q2.

Alex Albon took fourth, with Charles Leclerc giving Ferrari something to enjoy ahead of its 1000th world championship F1 race as he grabbed fifth with the last improvement in Q3, coming off a poor result at Monza last weekend for the Scuderia. 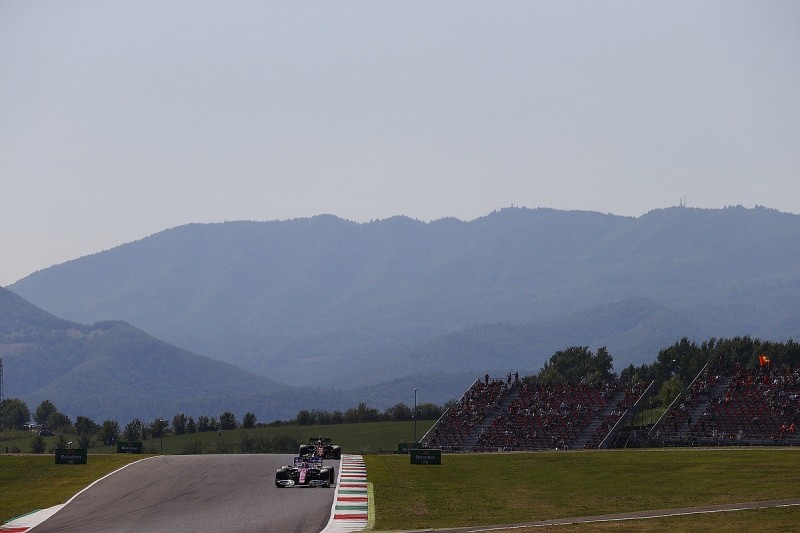 Sergio Perez completed his only Q3 run in the middle of the segment and took sixth as no one else in the top 10 could improve, which meant his Racing Point team-mate Lance Stroll took seventh - but the pair will switch places due to the Mexican's one-place grid penalty.

Daniel Ricciardo was eighth ahead of Carlos Sainz Jr, while Ocon took 10th without setting a time in Q3.

Sainz's last-gasp improvement in Q2 got him through to the final shootout, but at the expense of his team-mate as Lando Norris was knocked out in 11th - the first time since the 2019 Italian GP that he has not made it through to Q3.

Daniil Kvyat took 12th despite going off at the exit of Savelli on his final lap in Q2, which he had to abandon as he went fully off the road and into the gravel, with Kimi Raikkonen P13 for Alfa Romeo.

Sebastian Vettel had another low-key qualifying result as he finished 14th, only ahead of Romain Grosjean in Q2.

In Q1, Vettel's last-gasp improvement knocked out Gasly, who will start from his lowest grid spot of the season in P16 as a result.

Antonio Giovinazzi was shuffled down to P17 by the flurry of late times at the end of the opening segment, while George Russell maintained his 100% qualifying record against Nicholas Latifi despite a major off on his final lap.

The Williams driver, who missed much of FP3 to a brake-by-wire issue, slid wide at the exit of Savelli, with both right-side wheels in the gravel and the car bouncing across the grass as he shot back left for Arrabbiata 1.

But it did not disrupt his progress to a personal best time in Q1, which became P18 on the grid ahead of Latifi, who was the only driver of the five knocked out not to set a best time on his final run.

The most surprising Ferrari F1 call-ups