Despite losing the lead of the race at the start, Hamilton managed to grab the advantage back from Bottas following the first red flag period, and then kept his cool to record his sixth win of the season in dominant fashion.

It means Hamilton has extended his lead in the F1 drivers' championship to 55 points with eight races remaining this season, after picking up the bonus point for the fastest lap late on.

Bottas make a better getaway than polesitter Hamilton at the initial start to grab the lead into Turn 1, as Ferrari's Charles Leclerc moved up to third after Max Verstappen fell back into the pack, reporting a lack of power.

Verstappen's race lasted just one more corner after he was struck from behind by Kimi Raikkonen, sending the Red Bull into the gravel and out of the race.

Italian Grand Prix winner Pierre Gasly's race also ended at Turn 2 following a clash with Raikkonen prior to the Alfa Romeo's contact with Verstappen, resulting in the safety car being deployed.

Romain Grosjean and Sebastian Vettel were also caught up in the collision, but were able to continue.

Once the cars had been cleared, the safety car was called in at the end of lap six, only to be deployed again just moments later following a multi-car crash on the main straight.

After Bottas opted to slow the pack for the restart, many of the drivers further back misjudged when to accelerate, resulting in Antonio Giovinazzi running into the rear of Haas driver Kevin Magnussen.

The cars also collected both Carlos Sainz Jr and Nicholas Latifi, putting all four drivers out of the race and leaving debris strewn across the pitstraight that forced the race to be red flagged.

A 25-minute wait followed before the race resumed on lap 10 with a standing start on the grid, albeit with only 13 cars after Esteban Ocon was forced to retire due to a brake issue. 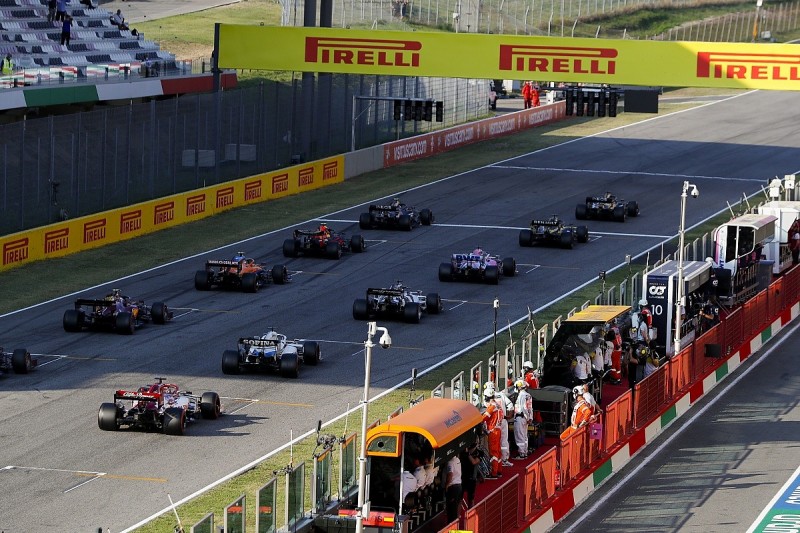 Despite his brakes smoking on the grid, Hamilton was able to sweep around the outside of Bottas at Turn 1 to regain the lead of the race, with the two Mercedes quickly pulling clear on a fresh set of medium compound tyres.

Leclerc was able to hang on to third place for Ferrari on the restart, but soon faced pressure from the cars behind as he struggled for straightline speed.

Lance Stroll was able to move into the final podium position on lap 18 with a pass on Leclerc, who then lost places on consecutive laps to Daniel Ricciardo, Albon and Sergio Perez, dropping the Ferrari back to seventh before pitting for a set of hard tyres.

Hamilton was initially able to maintain a stable gap of two seconds to Bottas following the restart, but his advantage swelled as the Finn struggled with wear on his front tyres.

Bottas radioed the Mercedes pitwall to request the opposite compound to Hamilton at the next stop in a bid to close the gap, which had grown to more than seven seconds by the time he came in at the end of lap 31 for hard tyres.

Mercedes informed Hamilton it was pitting Bottas first for safety reasons before bringing the race leader in one lap later. Hamilton was also fitted with hard tyres, matching Bottas' strategy, and emerged from the pits with a buffer of over six seconds.

In the battle to complete the podium, Renault moved to get the undercut on Stroll by bringing Ricciardo in at the end of lap 27 for a fresh set of medium tyres.

Racing Point reacted three laps later, but it was too late to keep Stroll ahead as Ricciardo got the jump, cycling back to third once Albon had made his pitstop for Red Bull and dropped back to fifth.

Eager to protect its advantage and look after both cars, Mercedes informed Hamilton and Bottas with 20 laps remaining that they should stay off all kerbs and look after their tyres. Bottas quipped that a "safety car would be nice right now", having seen Hamilton's lead stabilise at six seconds.

His wish was granted five laps later when the safety car was deployed following a crash for fourth-placed Stroll at Turn 9, going off at high speed into the tyre barrier after his car snapped on the kerb.

Although his Racing Point RP20 car was left with heavy damage, Stroll was able to get out of the car unassisted and walk away from the crash site, having reported a puncture. 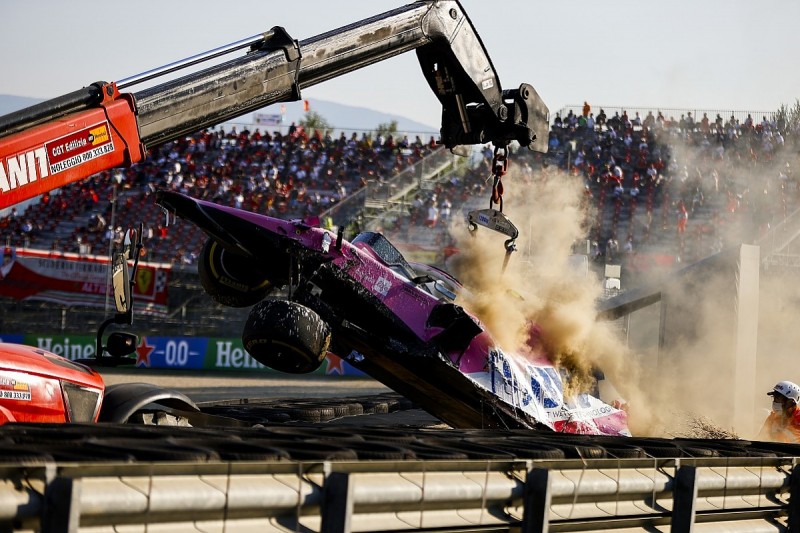 The majority of drivers quickly reacted to the safety car being deployed by pitting for fresh tyres, with Hamilton retaining his advantage over Bottas despite coming in one lap later.

But the race was subsequently red flagged for a second time on lap 45 so that barrier repairs could be completed at Turn 9, setting up a final 13-lap sprint to the finish with just 12 cars still running, all of whom took soft tyres for the restart.

Bottas struggled once again on the third standing start of the race, slipping behind Ricciardo on the run to Turn 1 as Hamilton streaked clear in the lead.

Bottas was able to recover second place one lap later, sweeping around the outside of Ricciardo, while Albon picked off Perez for fourth as he set his sights on his maiden F1 podium.

Albon was able to close up Ricciardo two laps later, getting side-by-side around the outside of Turn 1 before sweeping past into third place. The Red Bull driver was given the hurry-up to catch Bottas ahead, who was forced to pick up his pace in the Mercedes in response.

But Hamilton was able to match Bottas' pace throughout the closing stages, eventually finishing the race 4.8 seconds clear to record victory at Mugello, picking up the bonus point for the fastest lap in the process.

Bottas crossed the line second ahead of Albon, who was able to record his maiden F1 podium finish for Red Bull in third. 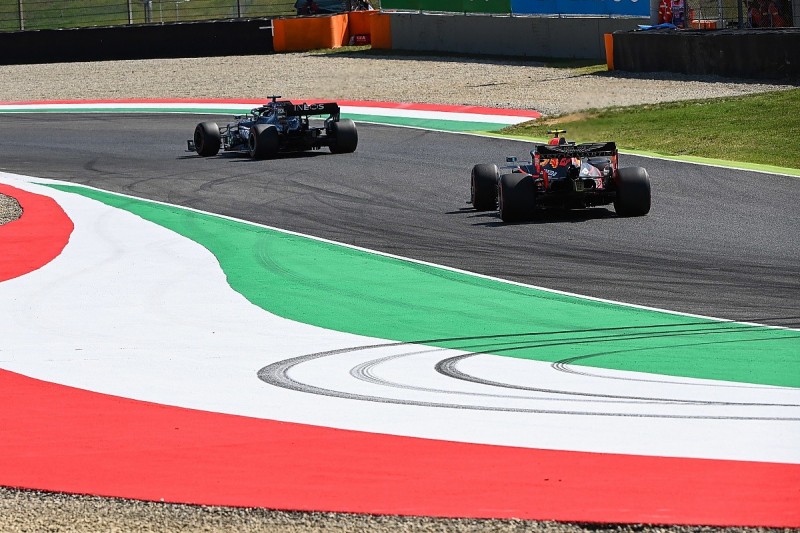 Ricciardo matched his best result since joining Renault by finishing fourth, falling just shy of his first podium since Monaco 2018 and winning a podium bet with team principal Cyril Abiteboul.

Sergio Perez crossed the line fifth for Racing Point after a race-long battle with Lando Norris that featured him pulling clear after the final restart, leaving the McLaren driver in sixth place at the chequered flag.

Daniil Kvyat recorded his best result of the season so far for AlphaTauri, finishing seventh, while Ferrari managed to record a double-point finish to mark its 1000th race.

Charles Leclerc made three pitstops as he struggled with tyre wear, but gained eighth place after Kimi Raikkonen received a five-second time penalty for crossing the white line at pit entry, dropping him to ninth.

Vettel finished 10th for Ferrari, marking his first points since the Spanish Grand Prix after getting the jump on Williams' George Russell at the final restart.

Russell had been on course for his maiden F1 points through much of the race, only to drop back in the closing stages and finish the race 11th, matching his best result in F1.

The spectacular peaks and troughs of Ferrari's cyclical history

Hamilton: "Three races in one day" Tuscan GP one of my "most challenging" F1 wins