The majority of the race was led by polesitter Lance Stroll, who lost out by taking a second stop for intermediates. Charles Leclerc used the same strategy to charge to third in the closing stages, only to lose out to team-mate Sebastian Vettel on the last lap after making a last-gasp move on Perez, while Mercedes opted to leave Hamilton on a one-stopper after he had charged up to the leading Racing Point cars.

At the start, all the cars made slow getaways, but it was the Red Bull cars that could not carry enough momentum off the line, which meant Max Verstappen and Alex Albon were quickly swamped from second and fourth by the Renault and Mercedes cars.

Esteban Ocon followed Perez into Turn 1 in third place as Stroll led away from pole, but he was tapped into a spin by Daniel Ricciardo, who had turned out of the left-hander to avoid Hamilton, with the Mercedes suddenly appearing on his inside.

Ocon spun around and Bottas was left with nowhere to go, spinning in sync with the Renault as he avoided contact. However, the Mercedes driver later tagged Ocon into a second spin at the Turn 9 left-hander on lap one, giving the Frenchman a left-rear puncture, as he lost the rear of his W11.

Stroll and Perez surged clear, with Hamilton up to third from sixth on the grid, but he slid off at Turn 9 and was jumped by the fast-starting Vettel, who was up from 11th on the grid, and the recovering Verstappen. 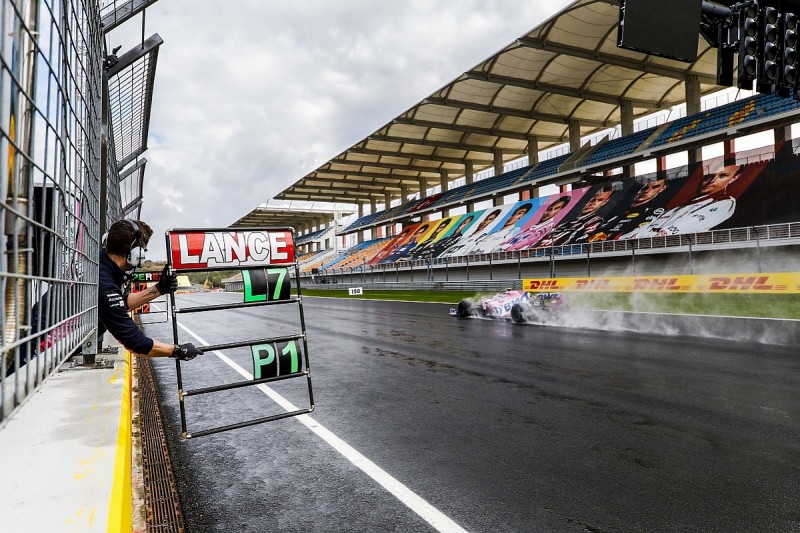 At the end of lap one of 58, Stroll had a lead of 3.6s over Perez, which he set about extending to over five seconds with a series of fastest laps over the next few tours before the Mexican driver started to ease back towards his team-mate.

After Leclerc had proved the time was right to take intermediates with a stop from P14 on lap six, the leaders started to come in two laps later, led by Vettel and Hamilton from third and fifth - by which time Hamilton had become the fastest driver on track.

When they came in on lap eight, Verstappen was unleashed from behind Vettel and he insisted on staying out on his full wets until lap 11, two laps after Stroll had come in and easily retained the net lead.

Perez pitted the lap before Verstappen, but had a slow right front change, and when the Red Bull finally came in - with Albon waiting until lap as the last of the leaders to change tyres - Verstappen just managed to jump ahead of Vettel, fractionally behind Perez.

Stroll's lead once the stops had shaken out was up to 10.7s, with the race then neutralised on lap 13 by the virtual safety car as Antonio Giovinazzi - who had crashed on the way to the grid ahead of the race, as did George Russell - pulled over to retire on the straight down the hill from Turn 8.

When the race resumed two laps later, the Red Bull drivers were able to fire their tyres up best of the leaders, with Verstappen harrying Perez and Albon easily passing Vettel at Turn 7 on lap 16 after Hamilton had locked up and slid off at Turn 12 - the track's main passing point - the lap the VSC ended.

Verstappen had a chance to pass Perez when the Racing Point slipped out of Turn 9 on lap 18, after he had begun to make significant in-roads into Stroll's lead, but as the Red Bull looked to Perez's inside of the Turn 11 kink he shot out on the kerbs on the outside and lost the rear, spinning off at high speed and falling behind Albon, Vettel and Hamilton.

As he had flatspotted his tyres, Verstappen had to pit for another set of inters and fell to eighth. Albon then began homing in on Perez as Hamilton struggled to stay with Vettel, the teams starting to think about switching to dry tyres. 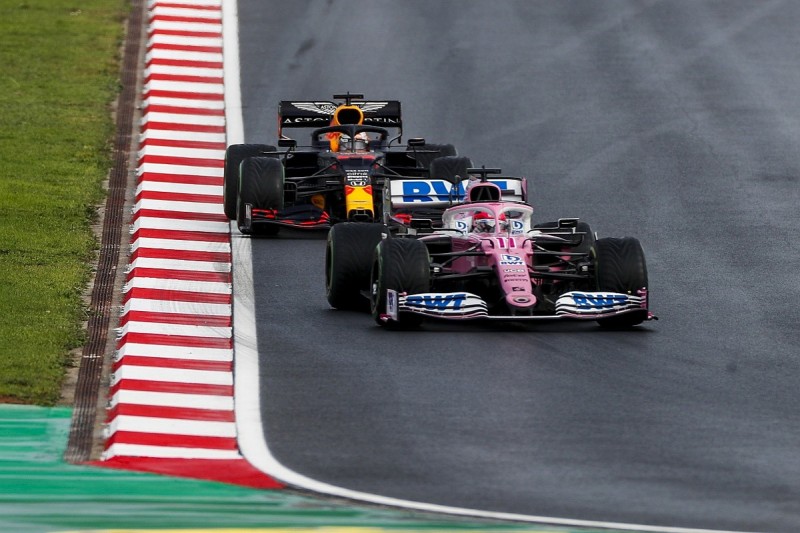 By lap 24, Perez had whittled Stroll's lead down to four seconds, with Albon fading back over the next five laps as he struggled with the inters starting to wear on the drying track.

The tread falling away on the green-walled tyres seemed to favour Vettel and Hamilton, who started to home in on the leaders as the race approached the halfway stage, when Leclerc again triggered another round of stops as he pitted for more inters from ninth.

His pace encouraged Vettel to pit as well, with Albon then gifting Hamilton third with spin at Turn 4 on lap 34, after which he immediately pitted.

Up front, Perez was suddenly closing right up to Stroll, getting within one second - DRS had been activated on lap 30 - as Racing Point considered whether to take the fresh inters or leave its drivers out.

But with Hamilton suddenly looming and the Ferraris flying on their new tyres, Stroll pitted on lap 36, coming out fourth, behind Verstappen - a factor again thanks to his early second stop.

Hamilton instructed Mercedes to leave him out and by the start of lap 37 he was within one second of Perez's car. He then made a simple DRS pass on the long run to Turn 12 to take the lead, which he had in the opening laps been nearly a pitstop behind.

The Briton quickly dropped Perez, who also did not pit for a second set of inters, building a gap of nearly 20s over the next 10 laps. 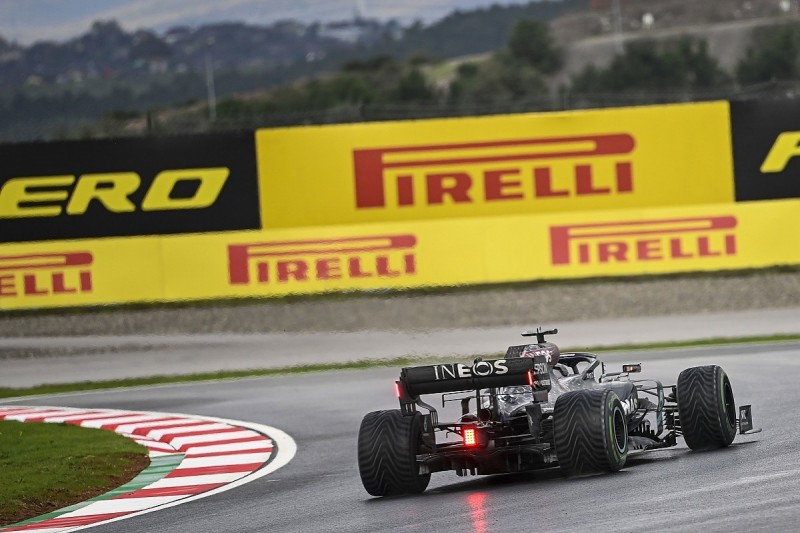 In the pack behind, Vettel, now being followed by the charging Leclerc, attacked a struggling Stroll into Turn 12 on lap 39, and when the former leader fought back at the left-hander, he slid deep and was passed by both Ferraris. He was then demoted at the same spot by Albon and Carlos Sainz Jr on the next two laps.

Leclerc was on the move again on lap 40 when he passed Vettel with DRS on the run to Turn 12 and he quickly gapped his team-mate over the next few tours, the period where Sainz passed Albon for fifth and the gaps between the leaders spread out significantly.

Despite the threat of rain returning in the closing stages, Hamilton rejected Mercedes' plans to pit him for a safety stop given his gap over Perez and cruised home to win by a comfortable 31.6s.

Leclerc had slipped off the road at Turn 4 as the race entered its final stages, but he had enough in hand over Vettel to stay third, where he seemed destined to finish before the gap to Perez closed rapidly over the final laps.

Perez went deep at Turn 9 on the last lap and that gave Leclerc the chance to attack for second coming into Turn 12, but the Ferrari went too deep, which allowed Perez to stay in front and the suddenly close Vettel to nip ahead into third.

Leclerc therefore finished fourth ahead of Sainz, with Verstappen recovering to sixth ahead of Albon despite having another spin as they lapped the spun Kimi Raikkonen off the road at Turn 4.

Lando Norris demoted Stroll to ninth when the former leader slipped off the road at Turn 1 late on, with Daniel Ricciado, who also spun while battling Norris a few laps before, rounding out the top 10.

Bottas ended up a lapped 14th, spinning a further four times - six in total - as he struggled in a race where he had to beat Hamilton by eight points to keep the title fight alive. 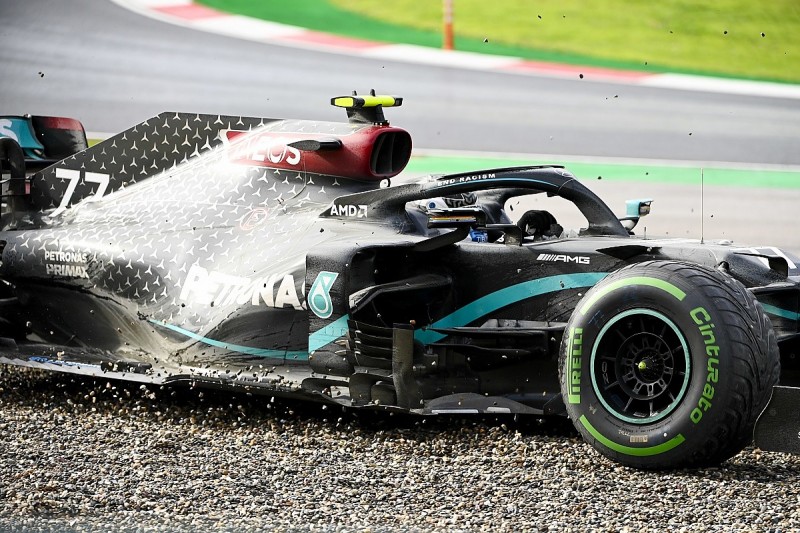 He came in to take new inters in the closing stages after his team-mate had put him a lap down, but his pace did not match Hamilton's until the very last lap.

Kevin Magussen retired in the pits late on, having rejoined the race after being released from his second stop with a suspected loose wheel - which will be investigated after the race.

Romain Grosjean and Nicholas Latifi also retired in the pits a few laps after they had clashed and spun off.