Ferrari's Kimi Raikkonen comfortably topped the times at the end of 2017 pre-season Formula 1 testing, which was a fiasco from start to finish for McLaren-Honda

After Valtteri Bottas and Mercedes headed the opening test at Barcelona, Ferrari rallied in week two with a display of impressive one-lap and long-run pace.

Raikkonen's 1m18.634s on super-soft tyres was 0.7 seconds faster than any other team managed and came after team-mate Sebastian Vettel visibly held back on his own performance runs.

Vettel backed off twice while on ultra-soft tyres to limit himself to a 1m19.024s, but that was still good enough to keep him clear of the best Mercedes could manage in testing.

The Silver Arrows' new signing Bottas topped day two of the second test on a 1m19.310s on ultra-softs and that just shaded team-mate Lewis Hamilton, whose 1m19.352s a day later also came on ultra-soft tyres.

Vettel's long-run pace also proved encouraging for Ferrari, although Mercedes did not complete a race simulation with the upgraded engine that appeared in the second week.

Ferrari's encouraging showing in the second half of testing was not without its problems.

Raikkonen spun at Turn 3 on Wednesday and hit the wall, damaging the left-hand side of the car and restricting the Finn to 53 laps. He also suffered an on-track stoppage on the final day.

That meant Ferrari did not match Mercedes' mileage, as Hamilton and Bottas added another 540 laps in the second week to accrue a test-best 1096 laps between them - Bottas proving the most industrious driver across all of testing with 628 laps to his name.

That translates into 3170 miles of the Circuit de Catalunya for Mercedes, equal to 16.6 Spanish Grands Prix. Ferrari was still Mercedes' closest challenger on the mileage count, with its SF70H logging 956 laps (2765 miles). 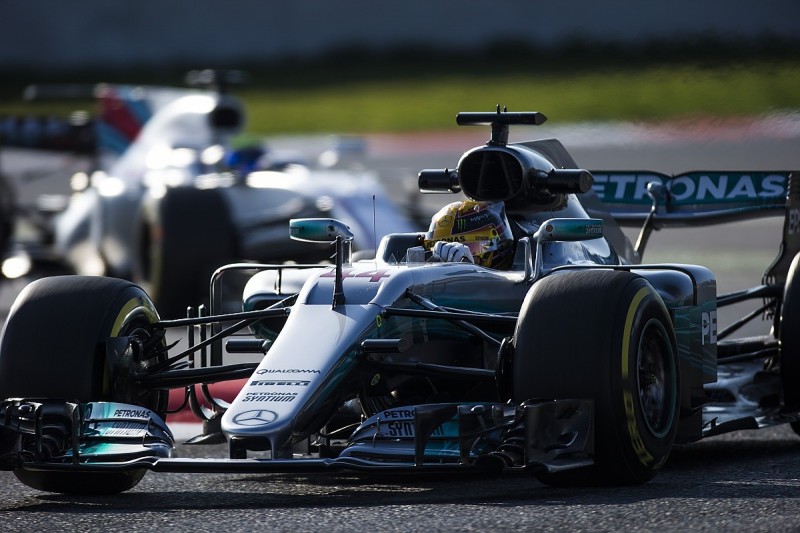 On the engine side, Mercedes led the way again with the works team, Williams and Force India racking up 2681 laps. Ferrari, Haas and Sauber managed 2459, but Renault struggled and Honda had a disaster.

Gremlins in the MGU-K in Renault's new Energy Recovery Systems meant poor reliability for the works outfit, plus its customer teams Red Bull and Toro Rosso.

The French manufacturer's overhaul of its engine concept is the reason for its fragility, which it expects to rectify by the Australian Grand Prix on March 26, and its trio of teams racked up just 1181 laps.

Red Bull driver Max Verstappen's final day improvement to a 1m19.438s on super-softs moved him to sixth and within sight of Mercedes, albeit slower than Williams' Felipe Massa on ultra-softs.

Carlos Sainz and Nico Hulkenberg also improved on the last day to go seventh and eighth respectively for Toro Rosso and Renault.

There was no such silver lining for McLaren and Honda, though, as a problematic test got worse, not better.

Low mileage (208 laps) and low performance in the first week was followed by a barely-improved lap count of 217, but also Fernando Alonso's damning verdict that Honda's much-anticipated RA617H engine had "no power and no reliability".

Alonso (190 laps) and Stoffel Vandoorne (235) caused two red flags each on the final two days, and completed the fewest number of laps of those present at both tests - although Sauber driver Pascal Wehrlein, who skipped the first test with a back injury, still managed more laps than Alonso.