Ferrari and Renault also showed good pace, but McLaren's season began badly as a lost wheel confined Fernando Alonso to the garage for most of the morning.

Ricciardo's best time of 1m20.179s - set on medium tyres - came in the dying stages of the four-hour session, and minutes after Valtteri Bottas had knocked Ferrari's Kimi Raikkonen off the top of the timesheets. Bottas ended up two tenths of a second down on the Red Bull.

Raikkonen led going into the final half-hour of running, having just deposed Renault driver Nico Hulkenberg with a 1m20.506s on softs, before Bottas took over with a 1m20.349s with 10 minutes left.

Ricciardo's last-minute effort knocked Raikkonen down to third place, while Hulkenberg remained fourth, 0.368s back, having racked up the most laps of the morning of any driver with 73.

That was one lap more than Brendon Hartley managed in the Honda-powered Toro Rosso, which ended the morning with the fifth-fastest time, albeit 2.192s off the pace.

Lance Stroll was sixth for Williams, ahead of Haas driver Romain Grosjean and Alonso in the McLaren, which managed the least laps of any team in the morning. 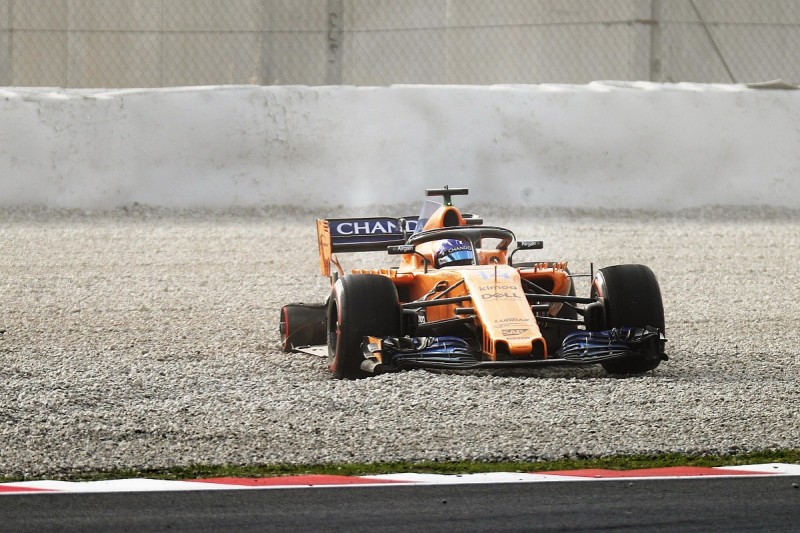 Alonso caused the first red flag of the day when a "wheelnut issue" resulted in the MCL33 losing its right-rear wheel and becoming beached in the gravel at the final corner in the first hour.

He spent the next three hours in the garage before finally re-emerging with less than 15 minutes remaining of the session, but only managed another four laps on top of the six he did before the incident. His best time was four seconds off the pace.

Force India development driver Nikita Mazepin caused the only other red flag of the morning with a spin at Turn 4.

Mazepin ended up at the bottom of the timesheets in 10th place, behind the Sauber of Marcus Ericsson and a little over five seconds off the pace.

The winners and losers of F1 testing's opening day