Sergio Perez ended the second morning of 2020 Formula 1 pre-season testing on top of the timesheets, as the Racing Point driver clocked a 1m17.347s halfway through the session

Perez set his best lap just before the two-hour mark on the C3 tyre, the middle compound in Pirelli's five-tyre range, amid a flurry of strong times in the 1m17s.

He took top spot from Renault's Daniel Ricciardo, who spent a long period of time in the middle of the session lingering in the garage.

Ricciardo returned to the track for the final hour having logged very few laps, but ultimately ended the morning's running with the fewest tours of the Barcelona circuit with 41.

Red Bull's Alex Albon was third quickest during his first appearance in pre-season testing, having overcome stunted running at the start of the session owing to problems with his seat.

After Red Bull adjusted Albon's sitting position, the Thai driver went on to pip AlphaTauri's Pierre Gasly by just one hundredth of a second. 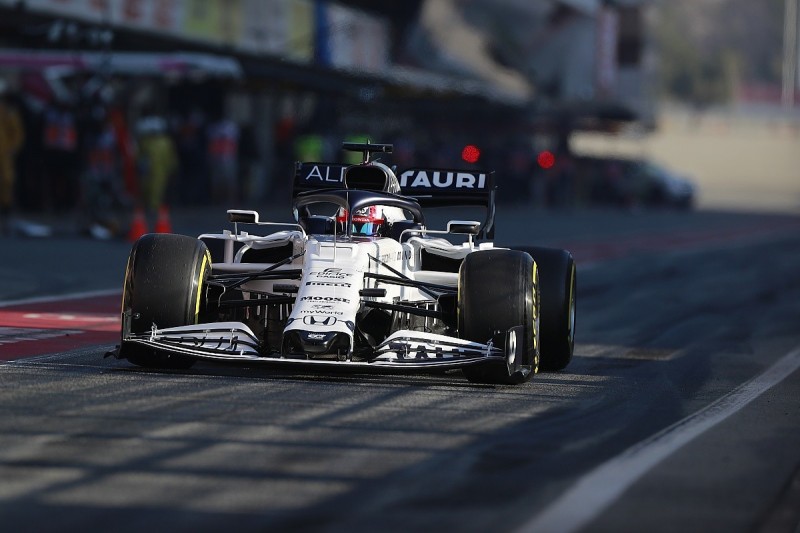 Gasly endured early strife with a spin after just six minutes at Turn 9, the scene of his large accident during last year's testing while driving for Red Bull.

But the French driver recovered adeptly, collecting a healthy 77 laps over the first four hours.

George Russell surprised with the fifth-best time of the morning, lodging a time almost exactly a tenth down on Gasly's having spent his morning conducting aero work for Williams.

Charles Leclerc was a muted sixth following a lengthy spell in the Ferrari garage.

Leclerc looked set to end the session with the lowest lap count, but the Monegasque racer made an appearance at the end of the morning's running to boost his mileage at the wheel of the Ferrari SF1000.

Lewis Hamilton was seventh quickest, over a full second down on Perez, but topped the majority of the first hour of running with a time on C1 tyres.

Hamilton then spent a particularly lengthy period putting long runs on a set of C2 tyres, during which he was spotted trialling a customisable steering mode, recording a total of 106 laps before lunch.

Behind him, Romain Grosjean collected 87 laps - the second-highest tally - having got his first taste of the Haas VF-20.

Both Grosjean and Hamilton endured moments early on in the session, as the two snatched at their brakes and locked wheels in the colder temperatures at the start of the day.

Alfa Romeo's Kimi Raikkonen improved late on in the session, but remained ninth overall, while Lando Norris propped up the timesheets - 1.190s down on Perez's quickest time - having conducted the bulk of McLaren's running on C1 tyres.

Aside from the brief spins and excursions early on, there were no stoppages on the circuit in a clean session - leaving the marshals with little work to do throughout the morning.

Berlin ePrix I Plus
Formula E