Cool temperatures and a late rain shower made for a relatively uneventful afternoon of running, with the top four remaining unchanged from the morning.

It meant Ricciardo ended the day fastest by 0.178 seconds ahead of Mercedes driver Valtteri Bottas, who both used medium tyres, with Kimi Raikkonen third for Ferrari on softs.

Nico Hulkenberg completed a top four split by less than four tenths in the Renault, also using mediums in the morning before handing over to Carlos Sainz Jr for the afternoon.

Ricciardo put Red Bull on top of the lap count as well as the timesheets, becoming the only driver to breach triple figures with 105 laps complete.

Renault's RS18 got closest to breaching the 100-lap mark, with Hulkenberg and Sainz managing 99 between them. 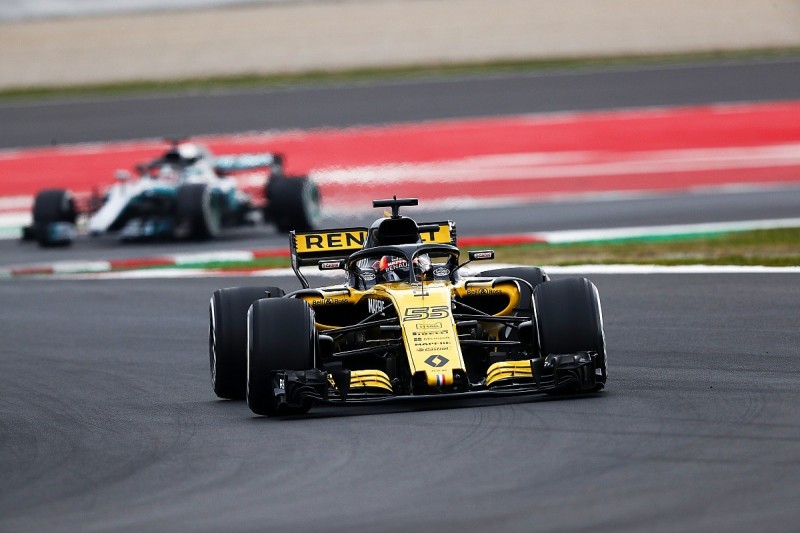 Sainz was fastest of those whose running was restricted to the afternoon in fifth place, ahead of reigning champion Lewis Hamilton, who clocked 25 laps after taking over driving duties from Mercedes team-mate Bottas.

After losing three hours of running in the morning, Fernando Alonso set the fifth fastest time - a 1m21.339s - on a set of super-softs, but later had that effort disallowed for cutting the Turn 14 chicane near the end of the lap.

His second best lap of 1m22.354s instead placed him seventh.

The Spaniard managed 41 laps in the afternoon, bringing his tally to the day up to 51.

Brendon Hartley and Lance Stroll were eighth and ninth fastest on the strength of their times from the morning, while Haas man Romain Grosjean made a modest improvement in the afternoon.

He was 10th fastest, ahead of Sauber's Marcus Ericsson.

Nikita Mazepin did not run at all in the afternoon after a spin in the morning in Force India's VJM11 and ended up 12th fastest.

The team reported that a "sensor issue" hindered its morning running, causing brake cooling problems, and by the time it had the situation resolved conditions had deteriorated too much.

Propping up the timesheets was Williams rookie Sergey Sirotkin, who took over from team-mate Stroll in the afternoon but did not set a representative time.