Verstappen took over on Tuesday from F1 team-mate Daniel Ricciardo, whose running on the opening day was limited to 50 laps by a broken sensor and a battery issue.

In Red Bull's RB13 for the first time, Verstappen turned 89 laps and set the third-fastest time, his effort on the soft tyre 1.240 seconds off the pace set by Ferrari's Kimi Raikkonen.

"Today was very positive, we almost did everything we wanted," Verstappen said.

"Good impressions. We have done a lot of mileage. That was our goal, to test all the parts.

"We did that today and that's the most important. We had a very positive day, not too many issues and we did quite a lot of laps.

"[The car] felt good. Difficult to say where we are exactly but it was positive."

Verstappen described Monday's interrupted running with Ricciardo as "basically a shakedown", given Red Bull did not complete a filming day before the start of testing.

Renault is targeting big performance gains in 2017 with a power unit it says is "95% different" to the unit with which Red Bull cemented its place as second in F1's order behind Mercedes last year.

Toro Rosso's filming day last week was halted by an issue with the engine, but Verstappen is encouraged by the reliability so far. 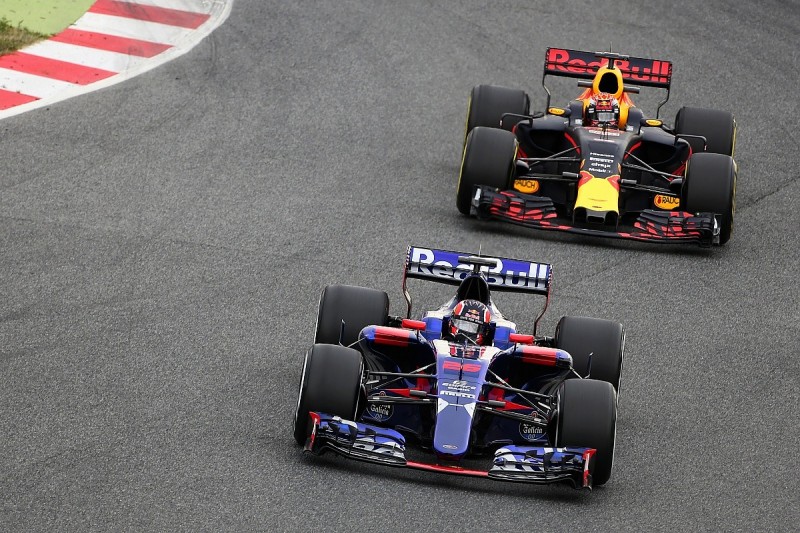 "The reliability today was pretty good," he said. "We didn't have any issues.

"It is important to get the mileage first because it is a new engine again but it's too early to say where we are with the engine.

"But they made a step and that's always positive."

The 1m22.200s set by Verstappen on Tuesday was 0.887s faster than the time he recorded to qualify fourth for last year's Spanish Grand Prix at Barcelona, a race he won.

Noting a "good step" with the speed of the new-generation cars, Verstappen said the RB13 was "more enjoyable through the fast corners" and offered gains in the slow corners, too.

"You have a lot more traction," he said.

"That was very difficult last year, to find a good compromise to have good exit from the corners but with these wider tires and cars it's a lot better."