Just after darkness had fallen at the Losail circuit, Friday’s second session got underway, with Kimi Raikkonen leading the pack out of the pits and setting the opening time during the early running on the harder compounds.

The first place benchmark tumbled and was shared around during the first 15 minutes of the session, during which Hamilton, on an out-lap briefly got in Bottas’s way as they approached the Turn 6 hairpin, with the world champion going off into the runoff as a result.

Charles Leclerc, Yuki Tsunoda and Fernando Alonso all had brief moments at the head of the order before Verstappen posted his opening flier – a 1m24.285s on the mediums.

Tsunoda, running the same rubber, then went faster on a 1m24.233s before Verstappen, who’s run had continued, moved back in front on a 1m23.743s.

A few minutes later, Hamilton and Bottas, also on the mediums, jumped ahead – the Briton going quickest with a 1m23.604s before Bottas edged him with a 1m23.324s and the action died down as the session’s opening quarter ended.

After a brief lull, the first drivers were sent out for their qualifying simulation efforts on the softs just before the halfway mark.

Bottas was the first of the frontrunners to do so, the Finn posting a 1m23.154s that bettered his first place benchmark, but losing that time for running to wide out of Turn 7 – the Finn apparently unaware that race director Michael Masi’s altered instructions issued after FP1 that declared any driver going off the purple and red kerbs at any corner, not just those five initially under scrutiny by the FIA, would have the lap in question deleted.

But Bottas nevertheless did improve the quickest time as he went for a second go on the softs a few minutes later, posting a 1m23.148s just past the 30-minute mark.

In the meantime, Hamilton had posted a time that left him third, while Gasly slotted into second with a 1m23.357s and Sergio Perez backed out of a flier on the softs after encountering too much traffic. 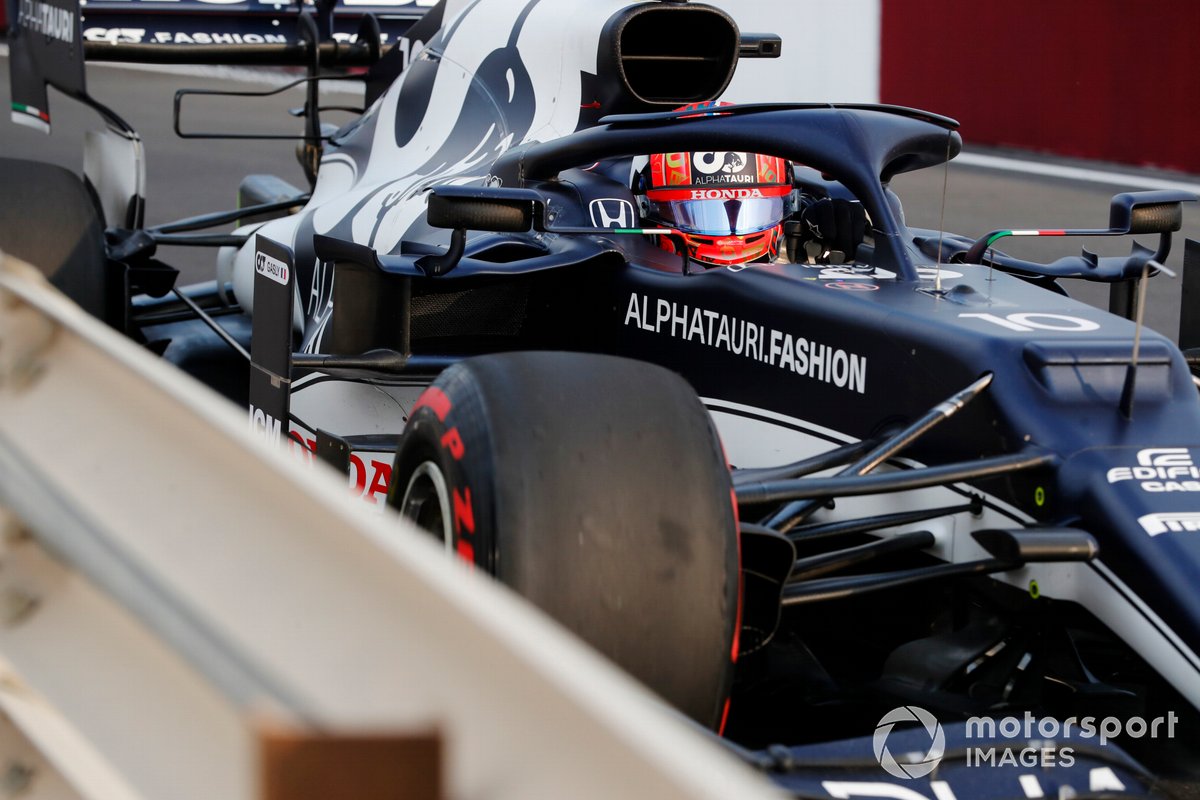 Verstappen’s qualifying simulation runs started with just under 25 minutes remaining, the Dutchman, who topped FP1, going very wide out of the long left-hand Turn 10 and losing time, winding up 0.431s back from Bottas.

After a brief trip to the pits, Verstappen went again on the softs and improved his personal best, albeit with a slightly slower time in the final sector, to close to 0.350s behind Bottas and demoting Hamilton to fourth.

Behind the leaders came Lando Norris and Lance Stroll, then Tsunoda and Perez – who did post a flier on the softs, with the Mexican slotting in into eighth, 0.639s slower than Bottas’s best.

Perez lost a chunk of time in the final 20 minutes as Red Bull worked on his DRS activation in its garage, after both of the RB16Bs had been spotted with their rear wings oscillating heavily with the DRS open at the end of the main straight.

Sebastian Vettel, who was frustrated to encounter both Hamilton and Perez going slowly on in laps as he began his soft-tyre run in the middle of the session, ended up ninth, with Sainz closing out the top 10.

The Spaniard was another driver to run wide onto the astroturf strip parallel to the runoff beyond Turn 10, kicking up a huge plume of dust and sand as he did so, having gone wide there to pass Vettel.

Alonso ended up 12th ahead of Leclerc, who picked up a €200 fine for going 1.6km/h over the 80km/h speed limit at the pitlane entrance with 25 minutes completed, whole Daniel Ricciardo ended up 14th in the second McLaren.