Formula 1 must avoid a scenario where drivers deliberately cause incidents to get rivals punished, like in football when players take a dive, says Red Bull boss Christian Horner.

Many fans and commentators were unhappy about the way that both Lando Norris and Sergio Perez were handed out punishments for forcing drivers wide as they battled for position at the Red Bull Ring.

Norris was deemed to have driven Perez off the track at Turn 4 early in the race, while Perez was involved in a pair of incidents with Ferrari’s Charles Leclerc later on.

With the sanctions appearing to have gone against a ‘let them race’ philosophy that F1 has operated with for a while, Horner is concerned that a bad precedent could be made.

He thinks it's vital that the way the penalties were handed out in Austria does not open the door for drivers to feel that the easiest way to beat rivals now is to throw their car off the track around the outside to try to get others a punishment.

“You don't want the equivalent of footballers taking a dive,” said Horner, who felt that none of the three incidents were worthy of a penalty. “I think we need to avoid that.

“I know it's incredibly difficult, because we talk about these things very often, and it’s difficult for the race director, but I did feel that maybe the incidents that we did see could have been leant to more racing incidents than been deserving of penalties.” 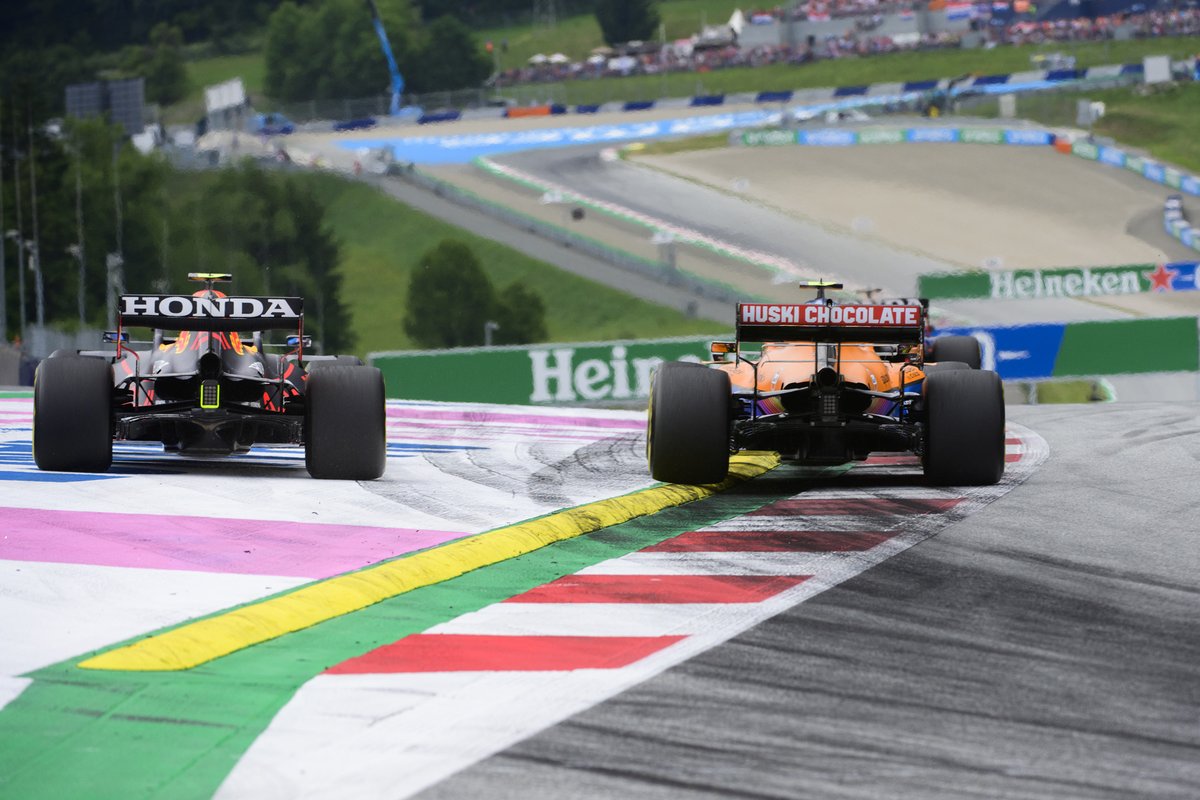 Horner said it has long been acknowledged that drivers trying to go around the outside of a rival at a corner put themselves at the mercy of the car on the inside.

“The incident between Checo and Lando, that's racing,” he said. “You go around the outside, you take the risk, particularly when you're not in a position of being ahead.

“But I think the FIA, having awarded that [first] penalty, then couldn't not award a penalty for a very similar move with Charles.

“These guys have raced in karting from when they were kids, and know if you go around the outside you take the risk, particularly if you're not ahead.

“So yeah I think the penalties were a bit harsh and it sort of does slightly go against the 'let them race' mantra that we've been championing in recent years.”

Horner did not think Perez had been too impatient in trying to get past Norris in such a manner, with the Mexican well aware of how tricky the McLaren would be to get past later on.

“I think he knew that it was going to be very hard to pass Lando, because he was so quick on the straight,” he said. “He was trying to get the move done quickly, and obviously it was a shame at that point to lose your buffer with Mercedes.

“He then picked up another couple of penalties with Charles. But I think once he managed to get himself past Daniel [Ricciardo] and into clear air, then he drove incredibly well. He got his head down and built that 10 seconds by the end of the race to Daniel.”