Verstappen, who is expected to win his second title this weekend, was some eight tenths in arrears as Leclerc took a visit to the gravel in his Ferrari to lap only 11th fastest.

With the 3.6-mile circuit still sodden, no one ventured out initially for the 90-minute session - FP2 having been extended by half an hour to theoretically accommodate a Pirelli test run.

But with the mule tyre a slick compound, the extra runtime was effectively meaningless in the lasting wet, although FP2 at Austin will similarly be extended to feature another shakedown.

Nicholas Latifi was eventually the first driver to hit the track after five minutes, touring on a set of full wets for two laps until he took to the Turn 16 escape road with a temporary car issue before spinning and resuming. He was joined by Carlos Sainz and Daniel Ricciardo.

After 12 minutes, Sainz became the first runner to set anything like a representative time as the Ferrari driver dropped below 1m50s to post a 1m49.615s. By comparison, Fernando Alonso set the pace in FP1 courtesy of his 1m42.248s run to find three tenths over Sainz.

With many electing to stay put in the garages, Sainz’s time stood proud until the hour mark, when Hamilton shaved 0.126s off in his W13 to lower the benchmark to 1m49.489s.

At which point, Mercedes team-mate Russell was the first to brave a set of the green-walled intermediates and duly dropped down to a 1m46.891s to signal the crossover.

Verstappen finally joined the action after 39 minutes, as did Leclerc, who ran straight off at Turn 11 on his out-lap but managed to keep the Ferrari F1-75 rolling through the gravel to re-join.

The defending champion did his usual trick of romping clear on his first attempt, the Red Bull driver circulating in 1m43.571s and then dropping to 1m43.137s next time around. 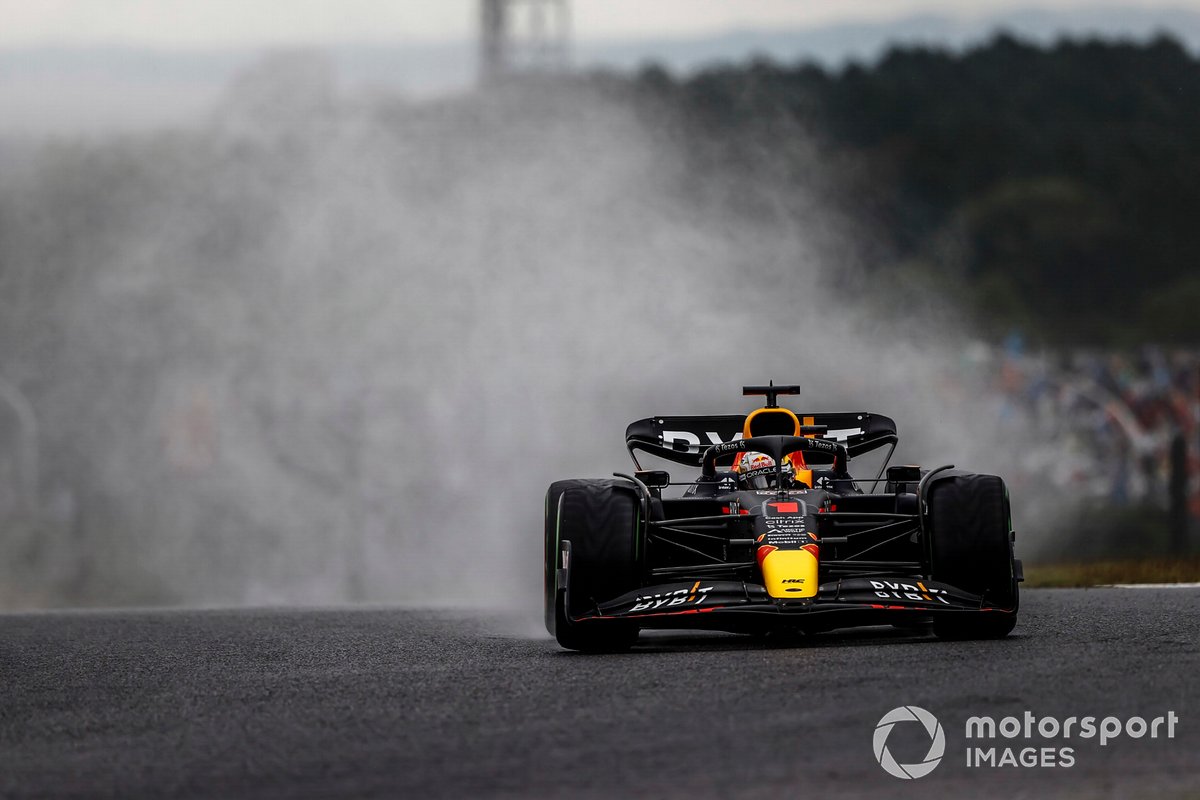 Russell would find a tenth over the RB18 on his next hot lap and then another, falling to a session-fastest 1m41.935s on inters just after the halfway point before nearly everyone returned to the pits.

That left Russell clear by 0.235s over Hamilton as Verstappen was third, 0.851s in arrears.

Despite the curveball of the adverse conditions, FP2 did then settle into the usual show of cars attempting long runs to lap with more fuel and slower ultimate pace - drivers persisted on old rubber as the times dropped by four seconds.

As such, Russell led a Mercedes 1-2 and watched the final quarter of an hour from the garage while Verstappen led Sergio Perez in fourth, the Singapore GP victor’s only notable moment coming with a run through the gravel at the hairpin.

Sainz, meanwhile, led the Ferrari charge in sixth but was 1.269s shy of Russell as Alonso ran to seventh over Valtteri Bottas, Esteban Ocon and Zhou Guanyu.

Leclerc, who complained of struggles with car feeling across several sets of tyres, turned in only 10 laps and was just 11th as he lapped 2.774s off the pace.

Mick Schumacher, who is fighting for his F1 future, did not contest the session owing to a chassis change following his shunt in FP1 when he aquaplaned on an in-lap aboard his Haas.