Raining falling heavily in the 30 minutes leading up to the one-hour session getting underway at 12pm local time at Suzuka meant no cars headed out when the pitlane opened, even though the precipitation had stopped coming down by the time the green exit light came on.

Kevin Magnussen became the first driver to head out after five minutes and he was so joined by home hero Yuki Tsunoda – although neither driver completed a timed lap, with Tsunoda reporting “a couple of rivers” on the track at the end of the first sector.

Nicholas Latifi, Mick Schumacher and Lance Stroll also ventured towards the end of the opening 15 minutes – but it was only the Haas driver that stayed out to set a time.

They were joined by even more cars as the first third of FP1 came to a close, with Leclerc saying he thought conditions would soon be suitable for intermediates.

His team-mate Carlos Sainz beat Schumacher’s time with his first flier on a 1m49.952s, before Leclerc, following a few seconds behind on the road, swept into first with a 1m49.103s.

The Ferrari cars continued to circulate and post quicker times on the full wets – first with Leclerc’s 1m48.104s and the Sainz, who had complained of hearing a strange sound from his engine, which thought might be coming from the turbo, forged ahead on a 1m47.758s. 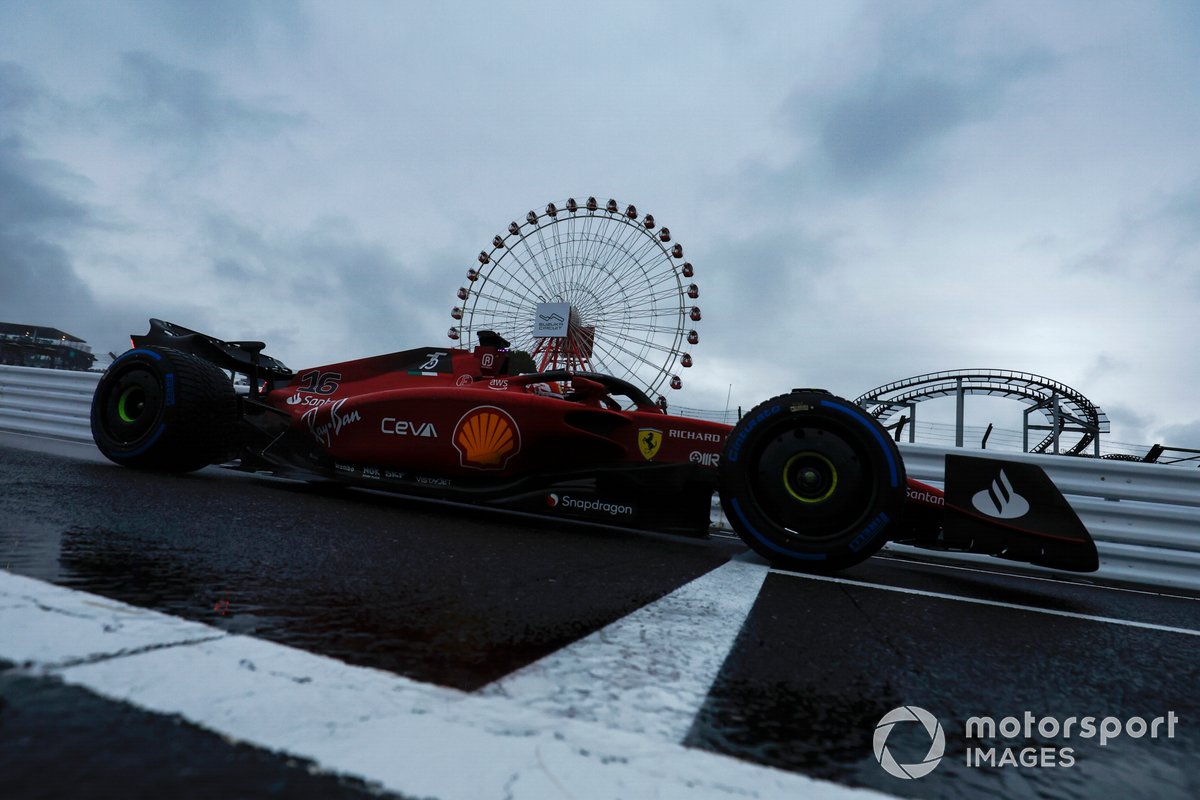 Verstappen, Esteban Ocon and Valtteri Bottas were the first drivers to head out on intermediates just past the halfway mark – the first two named doing so for their first laps out in FP1.

As has become a near trademark move for Verstappen in FP1s this year, Verstappen duly immediately moved to the head of the times with his first flier – a 1m44.059s.

Bottas and Ocon also then slotted in ahead of the Ferrari drivers using the green-walled rubber, as did Singapore winner Perez – albeit 2.886s behind his team-mate, who had by then completed a second flier to improve the best time to a 1m43.362s.

Ocon’s second flying lap then put him ahead on a 1m43.022s, before the rain returned and the spray increased around the 3.6-mile lap.

But that did not initially stop the times from improving, with the Ferrari drivers now on the inters and flying as the final 20 minutes approached.

Leclerc moved back ahead on a 1m42.634s that featured a massive slide nearly off the exit kerbs coming out of the second Degner corner, before Sainz beat that with a 1m42.563s.

Behind them came Alonso, who blitzed his way to the quickest times in the opening two sectors (Sainz kept the quickest final sector) and the top spot on a 1m42.248s.

The conditions worsening as the final 15 minutes commenced meant several drivers had off-track moments – including the two in red cars. 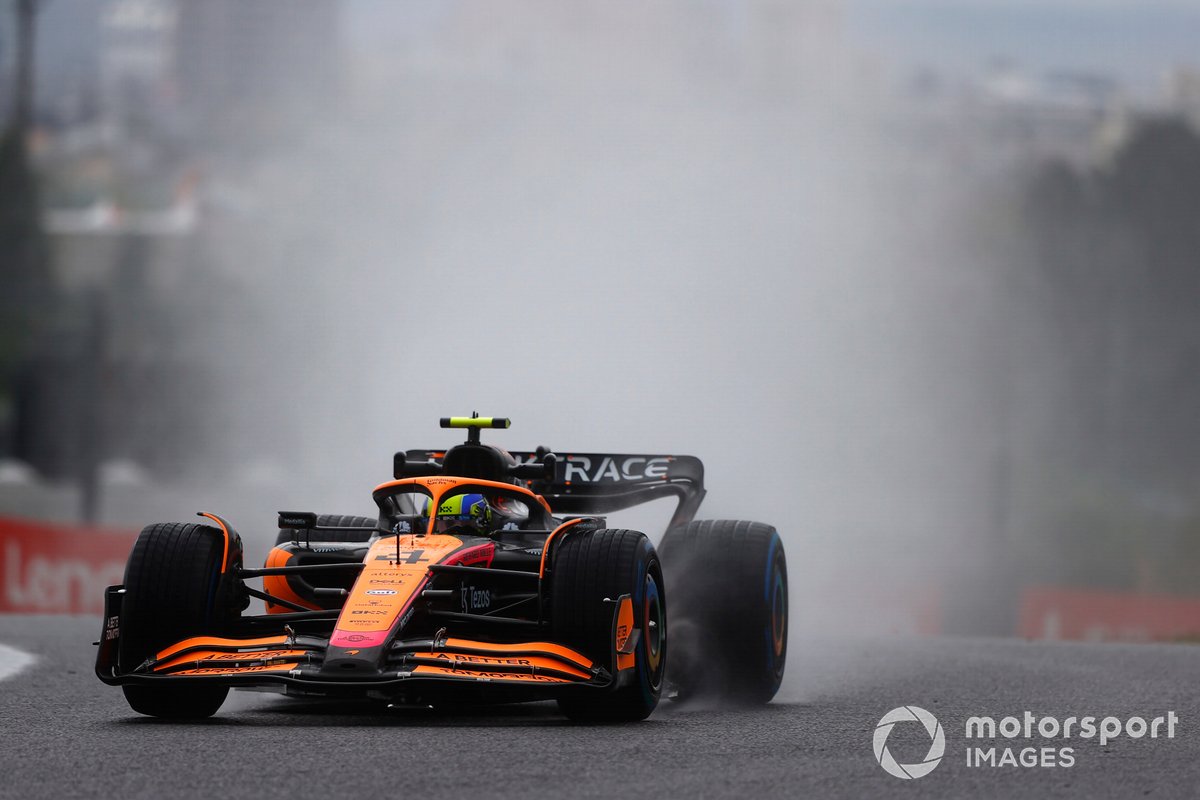 Sainz slid into the runoff at the Spoon curve, while Leclerc slid over the kerbs between the Degners on one lap before skating fully into the gravel at that point on his next tour.

Leclerc even returned to the full wet tyres for one final lap, but he soon joined the rest of his colleagues back in the pits.

Alfa Romeo’s pair Zhou Guanyu (11th in the standings) and Bottas led a mass final exploration out in the final couple of minutes – but no drivers improved their times on the full wets, with Bottas sliding off into the runoff at 130R.

The 10 drivers that did go back out – including the Ferrari pair – had instead been sent out to complete practice starts in the wet on the main straight, as is typical for any practice session.

On his return to the pits having completed his, Schumacher lost control of his Haas at the top of the hill at the end of the first sector and hit the wall – knocking the front corners off his car.

The final order behind the top three after all that ended up Ocon, Magnussen, Verstappen, Schumacher and Lando Norris – the McLaren driver having to pit after getting an engine warning notice during the early laps.

Bottas and Perez rounded out the top 10, the gap to the top spot nearly two seconds.

Lewis Hamilton was 13th behind Daniel Ricciardo, who had to scamper across the chicane just as the rain started to fall heavily again in the closing stages.

The other driver to have a trip into the gravel was Latifi – the Williams driver locking up and sliding off at low speed at the Hairpin just after 30 minutes had been completed.

The wet weather is predicted to persist across the first day of F1 action at Suzuka since 2019 thanks to the COVID-19 pandemic.