In bright conditions at Imola, the majority of the pack headed out early on in the one-hour session, with several drivers enjoying time in the top spot during a frenetic opening 15 minutes.

Ocon set the initial fastest time at 1m26.246s, but the benchmark was quickly lowered as the drivers explored the 3-mile track on the hard tyres.

Valtteri Bottas’s 1m20.345s lap on the hards was the first real flying lap of FP1, but that was soon beaten by Alfa Romeo’s Kimi Raikkonen before the Mercedes driver reclaimed the top spot with a 1m19.312s.

Perez then lowered the first-place benchmark to 1m19.205s before Ferrari’s Carlos Sainz Jr beat that with a 1m18.764s on the white-walled hard rubber.

Hamilton used the same tyres to briefly claim first place with a 1m18.257s before Sainz again improved as his run continued with two new fastest laps that took the P1 time down to a 1m17.682s at the 15-minute mark – just before AlphaTauri’s Yuki Tsunoda had a brief off into the gravel at the Tamburello chicane.

After a 10-minute lull in action, Pierre Gasly went quickest with a 1m17.470s and after a further 10 minutes Bottas again moved to first place on a 1m17.396s – just before Hamilton cut across the grass at the Variante Alta.

Sainz then took first place back with a 1m17.296s, with the session then red flagged following the clash between Ocon and Perez.

The Red Bull came to a stop on the exit of the Villeneuve chicane with his left-rear tyre blown off its wheel rim, with Ocon’s Alpine stopped further down the road with damage to the right-front of his car. The stewards summoned both drivers to explain the incident after FP1.

After a delay of just over 10 minutes the session resumed, with the drivers switching to the soft tyres to set a string of fast laps as FP1 concluded. 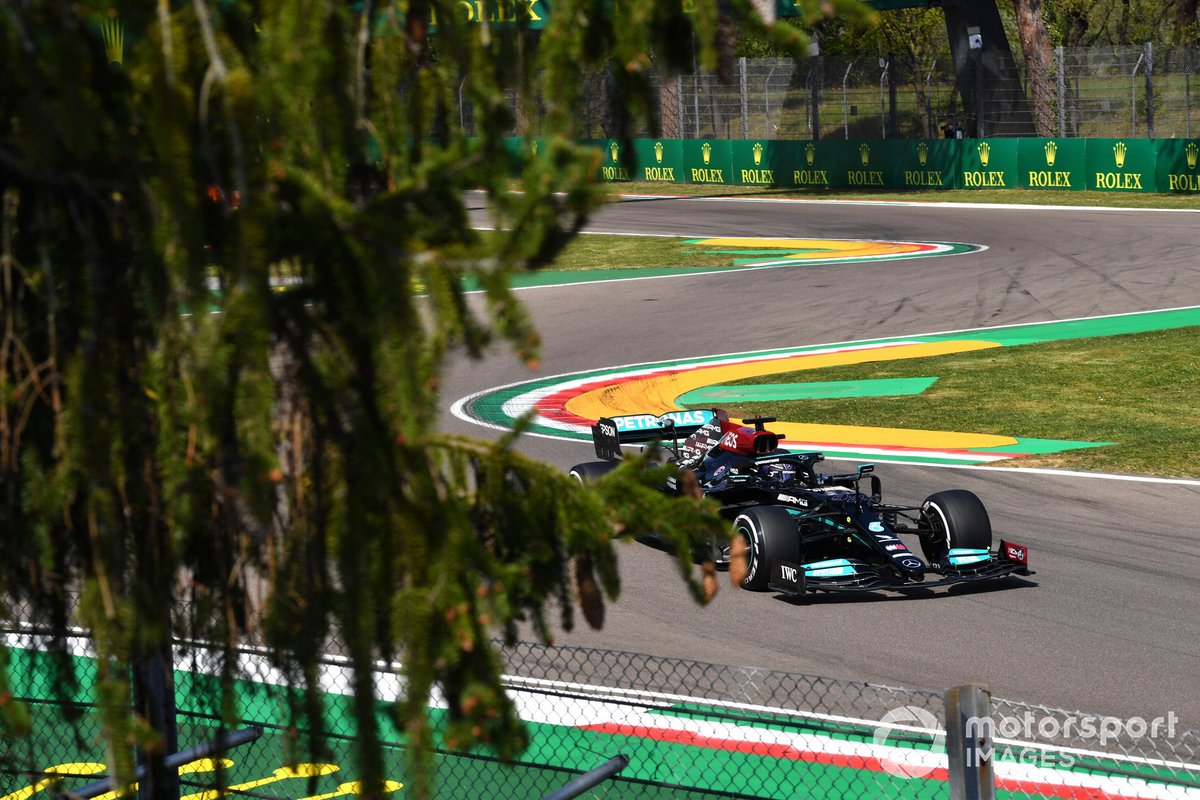 It looked as if Verstappen would hold on to top FP1 – after he swept practice at the season-opening race last time out in Bahrain – but the Black Arrows drivers went for a last-gasp final run and demoted him to third.

Charles Leclerc missed much of the running in the session’s opening half as Ferrari investigated an issue on his car, but he put in a strong lap late on to take fourth and drop Gasly down to fifth.

Sainz eventually finished sixth ahead of Fernando Alonso and Lance Stroll, with Nicholas Latifi – who had an off into the gravel after catching a snap of oversteer as he exited the first Rivazza turn following the session’s restart – ninth for Williams ahead of McLaren driver Daniel Ricciardo.

Perez and Ocon ended up 16th and 17th in the final standings as their clash ended their respective running.

A second red flag as brought out after the chequered flag had been waved after Nikita Mazepin spun off exiting the second Rivazza turn – the track’s final real corner – and knocked the left-front part of his front wing off against the wall near the pitlane entry.

At the same spot where he had spun during the session’s opening laps, the Haas driver dipped his right side wheels over the kerb and into the gravel, which pitched him into a spin and sent him to the wall.