The second one-hour practice session of the day got underway in the same sunny conditions as FP1, but with a 15-minute delay due to two red flag periods delaying Formula 2 qualifying – the support series session taking place just before FP2.

Most of the pack ran this rubber during the early stages – including Lando Norris, Leclerc and Sainz, who each demoted Stroll down the order with quicker times in the Canadian’s wake.

Shortly after Sainz had popped in his 1m13.544, Verstappen came through to complete his first flier of the day after his FP1 gearbox issue.

The Dutchman was immediately given a set of soft tyres by Red Bull, which he took to a 1m13.465s and the top spot.

The field spent the rest of the opening 15 minutes building up to speed, with Verstappen remaining quickest but not gaining time on his subsequent laps on the red-walled rubber.

Sainz then retook first place with a 1m13.412s to edge back ahead of Verstappen, as did Leclerc a few minutes later to slot in behind his team-mate, before a lull in action occurred as the drivers that had started on the harder tyres returned to the pits to switch to the softs.

After Alex Albon had leapt up the order on that compound while most of the pack were still in the pits, Sainz was the first of the frontrunners to head out on the softs.

The Spaniard blitzed to then-fastest times in all three sectors to improve the P1 benchmark to a 1m12.349s, despite enduring a heavy kerbstrike as he ran out wide through the penultimate corner. 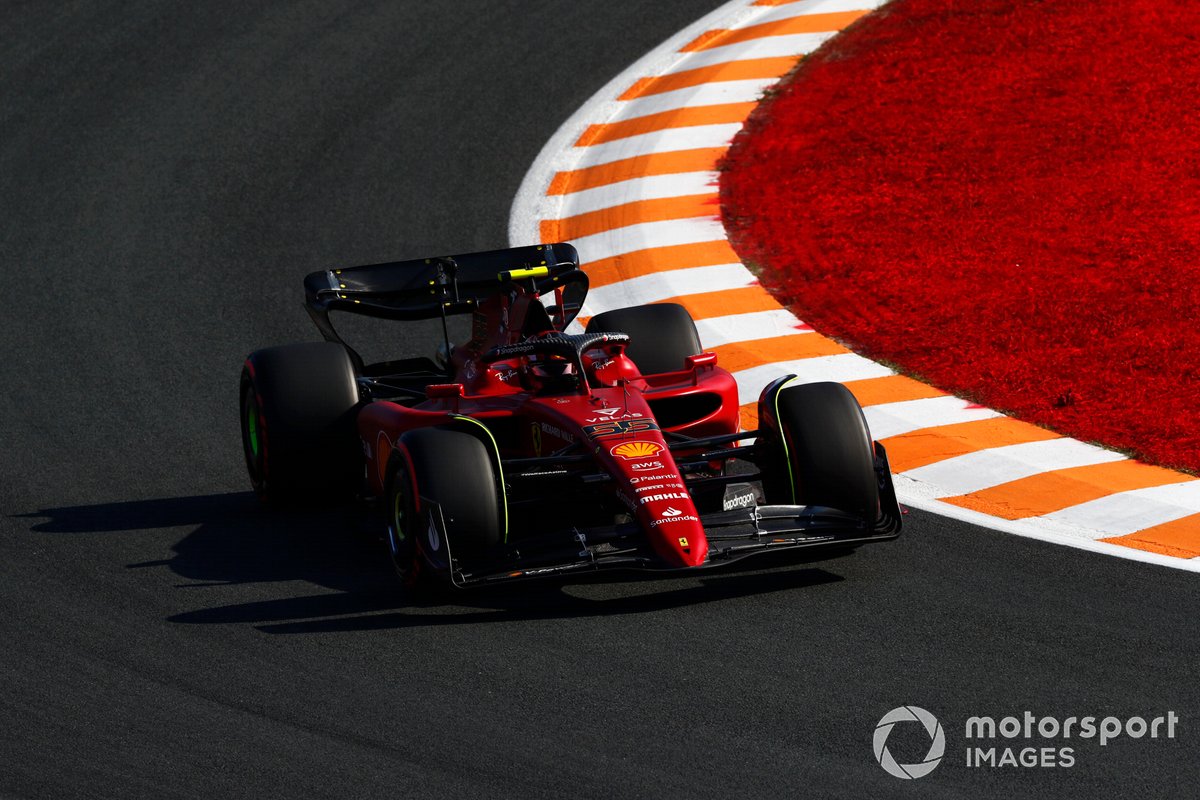 Verstappen was next to set a qualifying simulation effort – using a new set of the compound he had started the session on – but his time came in a massive 0.697s slower than Sainz.

This left a big gap for others to slot into, with FP1 pacesetter George Russell initially moving into second before he was shuffled down by Norris, who managed to edge Sainz in the first sector, and Lewis Hamilton in the other Mercedes, which had had radio problems during the early FP2 running.

Just past the halfway mark, Leclerc, who had been one of the last drivers to come in to pit and take off the medium tyres early on, finally headed back out to complete a soft-shod flier.

Although he did not top the times in any of the three sectors, Leclerc managed to string together a series of personal bests that added up to a 1m12.345s and the top time – just 0.004s ahead of Sainz.

Hamilton’s 1m12.417s meant the top three were covered by just 0.072s as the high-downforce Zandvoort layout returned Ferrari and Mercedes to happier hunting ground after Red Bull trounced the field last time out at Spa.

Stroll and Fernando Alonso also slotted in ahead of Verstappen before the teams switched to the typical end-of-FP2 high-fuel long running.

Behind Verstappen came Esteban Ocon and Daniel Ricciardo, who spent much of the closing stages in the pits due to an oil leak springing on the left-hand side of his McLaren.

The final 15 minutes were disrupted when Yuki Tsunoda, 11th in the final classification, slid off into the gravel exiting Turn 10 – the long left-hand hairpin just before the end of the middle sector.

That led to a seven-minute delay as the AlphaTauri was recovered, after which the pack headed out to complete the final four minutes of FP2.

Just before the session ended, Hamilton was cleared of impeding Sainz near the end of the afternoon’s earlier FP1 running.