Formula 1 drivers risk a "spiral into misery" if they switch to slicks too early in a potential wet/dry Emilia Romagna Grand Prix, thanks to new lower tyre blanket temperatures.

For the start of the 2022 season, the maximum temperature that tyres can be heated before they are fitted to the cars has been reduced to 70 degrees Celsius.

Until last year, the fronts could be heated to 100°C while the rears were allowed to be warmed to 80°C.

The shift in temperatures has triggered some warm-up issues for drivers when coming out of the pits, and in races has made the undercut less effective as the rubber is not immediately at its fastest for the first corners.

But the driver headaches could be amplified dramatically in the kind of mixed conditions that are expected for the Emilia Romagna Grand Prix.

Choosing the right moment to switch from intermediates to slicks could become especially tricky as the dry tyres may not be able to get up to the right operating temperatures when it is slightly damp.

If drivers miss the window and cannot get enough warmth into the rubber, then it could push the tyre completely out of its operating window and result in an inability to get up to speed.

Williams' head of vehicle performance Dave Robson says the experience of teams in the damp-but-drying qualifying session was an eye-opener as many drivers struggled.

"It was the first time we've really run slicks in that crossover period, and for sure the 70°C blanket temperatures certainly made that phase more difficult," he explained. "There's much less forgiveness. 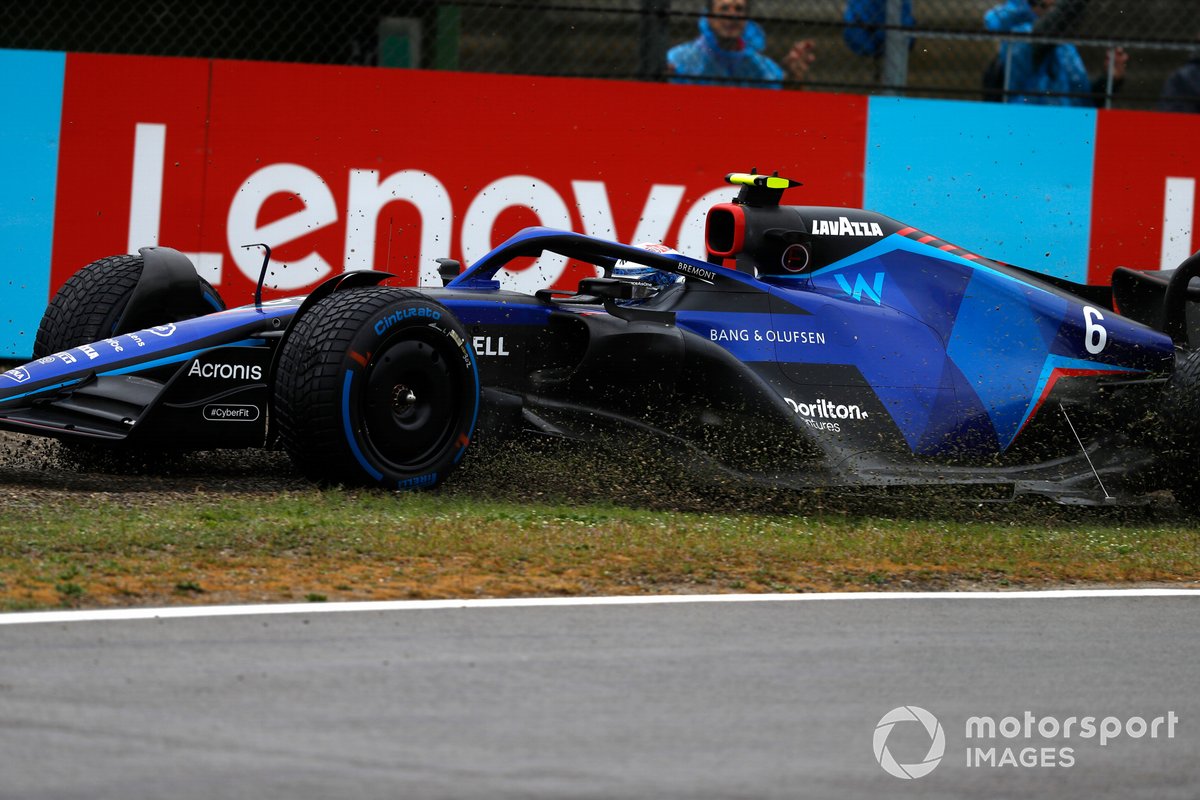 Several drivers hit strife during tricky conditions of qualifying, which Robson believes could be explained by the lower tyre blanket temperatures

"If it rains [in the race] and you gamble and fit the slick too early, then you will just spiral into a whole world of misery much more quickly than previous years, where at least you had a sporting chance from there.

"It can be difficult to time and is so different to previous years."

Robson says that getting heat into the tyres could take several laps, and he thinks the colder tyres out of the pits may have explained why so many drivers spun off in qualifying.

Asked if there was a link between the number of incidents and the cooler blanket temps, Robson said: "I think so, because conditions really weren't that bad.

"Even when it rained again in Q2, it wasn't conditions you'd normally think were tough so I think that must have played a part.

"I can't speak for anyone else but if look at [Carlos] Sainz, he just got caught out and that wouldn't have happened before. It definitely makes it tougher."

He added: "You've really got to have the confidence when you leave the pitlane on the slicks in those conditions, because the difference between getting on the positive spiral and the spiral of misery is just massive.

"If you can't get out there and hit it hard straight away, and you start losing temperature instead of gaining it, it is almost unrecoverable."

Krack: Aston Martin would be “foolish” not to want to keep Vettel in F1

How Hamilton is facing up to Mercedes' harsh new reality