Hamilton made a strong start from pole position, but Vettel kept him in sight throughout the opening stint and closed to within a second before Hamilton dived into the pits on lap 17.

The Briton still had the upper hand when he emerged, but the pendulum swung towards Vettel when Hamilton got bottled up behind Max Verstappen's Red Bull.

The Dutchman's defence cost Hamilton dear when Vettel emerged in front of both when he stopped on lap 23.

Vettel then bolted, extended his lead to almost 10 seconds before Hamilton made inroads late on - then fell back to 9.975s behind at the flag.

Bottas caught his team-mate after a disappointing first stint left him a dozen seconds in arrears, but ended up settling for a third, a second behind. 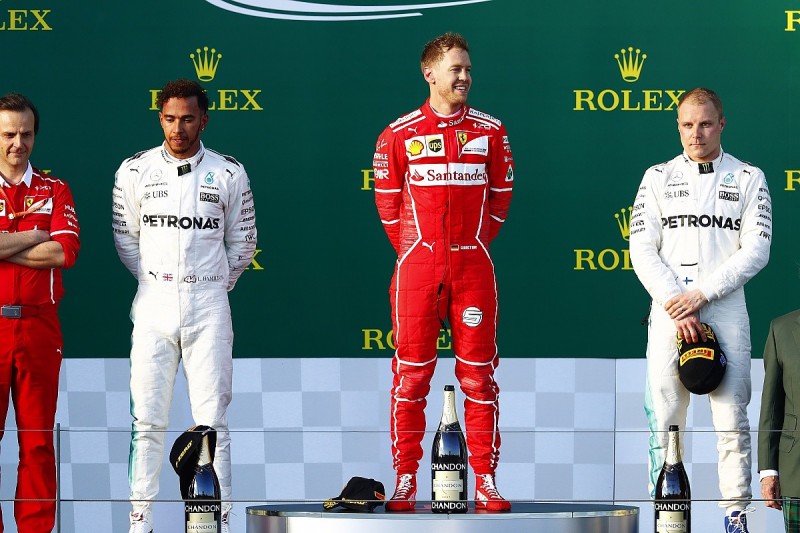 Behind the top three, Kimi Raikkonen had a quiet race for Ferrari, only coming into play late on when Max Verstappen briefly threatened to steal fourth.

The Red Bull driver was running super-softs compared to Raikkonen's softs in the second stint, and caught the Finn at a rapid rate in the final third of the grand prix.

Verstappen's charge included a brief hold on fastest lap, but Raikkonen rallied and consolidated the spot by taking fastest lap from Bottas on the penultimate tour.

Felipe Massa earned best-of-the-rest honours for Williams in comfortable fashion with sixth place, the last of the drivers not to be lapped, while Sergio Perez claimed seventh after two bold passes in his Force India.

Perez dived inside Daniil Kvyat at Turn 10 on the opening lap, then nailed the other Toro Rosso of Carlos Sainz Jr before the halfway mark with a fine round-the-outside move at Turn 3.

Kvyat ran extremely long on ultra-soft tyres in the first stint but lost out to team-mate Sainz after a surprise second stop late on to top up the air for the pneumatic system.

The Russian finished ninth ahead of Esteban Ocon, who earned his first F1 point on his Force India debut after catching and passing Fernando Alonso late on.

Alonso lost 10th to Ocon into Turn 1 and then 11th to Nico Hulkenberg as the Renault made it three-wide on the main straight, and almost immediately after Alonso brought his McLaren-Honda into the garage with a handling problem.

The Spaniard was one of seven retirements from the opening race of the season, with Romain Grosjean the first.

Grosjean lost sixth to Massa on the opening lap, then brought a smoking Haas into the pits after just 13 laps. His team-mate Kevin Magnussen made it a double retirement for Haas in the closing stages after hitting Marcus Ericsson on the opening lap.

Daniel Ricciardo started two laps down after stopping on a reconnaissance lap to the grid, and his race ended at the halfway stage after his Red Bull slowed to a halt exiting Turn 3.

Ericsson rejoined after his Magnussen clash but retired just before Ricciardo, while Williams rookie Lance Stroll and Jolyon Palmer - who rose to 14th in the early stages but suffered a braking problem in his Renault - also failed to finish.