But all three leading drivers failed to set their best times on the soft compound tyre as a Turn 1 off, track limits and encountering slower traffic cost the trio respectively.

In the only representative practice session for the 2020 season finale, the opening 20 minutes was dedicated to running the prototype C4 compound Pirelli has developed for use next season.

All the cars were quickly on track for the twilight session, with Renault's Esteban Ocon leading the way as the pitlane exit light turned green.

Bottas moved to the top of the times with his first complete lap on the 2021 rubber, a 1m37.818s, with Hamilton slotting in less than a tenth behind.

The cars returned to the pits after 20 minutes, with Bottas first in slightly earlier than the rest as he discovered a slight problem with his throttle pedal travelling too far beyond its normal limit. 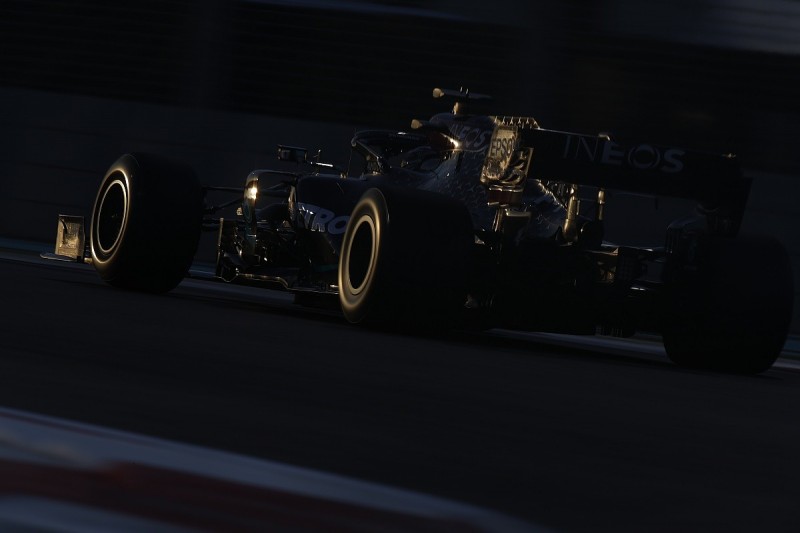 But Bottas soon moved back to the top of the times at the end of the first 30 of the session's 90 minutes with his first flying lap on the mediums - a 1m36.276s - which ended up being the session's fastest time.

This was because, although Hamilton went quicker on his first run on the soft tyre shortly before the session's halfway point, he lost his best time for running too wide out of the final corner.

Hamilton's 1m36.097s had not been significantly faster than the best time on the mediums, but he lost out because he slid just too wide exiting Turn 21 and his time was deleted for exceeding track limits.

Bottas was next up on the softs, but he had to catch a snap of oversteer at Turn 1 and he ran deep into the runoff, quickly abandoning the lap.

Nearly 10 minutes later, Verstappen appeared on the softs and set the session's fastest time in the first sector, but had already faded behind Bottas's benchmark in the middle sector before he eased off that effort after closing up behind Sakhir GP winner Sergio Perez, who was completing a race-data-gathering run for Racing Point.

Verstappen did then complete a personal best run on the softs, only a fraction faster than his best on the mediums, which he also lost for running too far wide exiting the final turn.

The teams had switched to long-run data gathering when the session was stopped after Raikkonen's Alfa dramatically caught fire as he swept towards the end of the first sector with just under 20 minutes remaining.

The Finn pulled over near a fire marshals post a short way down the main straight, by which time the rear of his car was engulfed in flames. 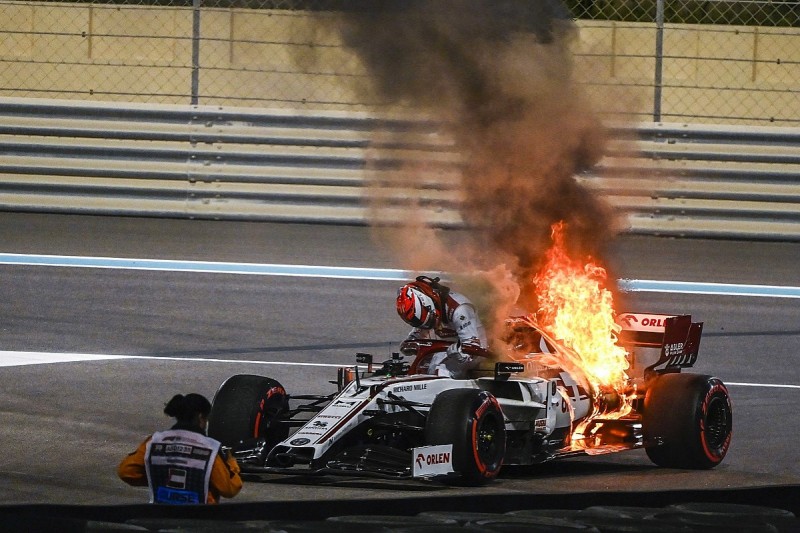 Raikkonen was able to climb out as the red flags were thrown, helping the marshals to put out the blaze - with his car continuing to smoulder for a long time after the initial flames had been extinguished.

The session was suspended for over 10 minutes, but did get going for the final five minutes, which featured Hamilton having to stop in the pitlane - in front of the Haas garage - as he was unable to select a gear.

The Mercedes mechanics ran down the pitlane and the world champion was able to get going again, Hamilton and Bottas having returned to the 2021 prototypes for the running before Raikkonen's car caught fire.

Alex Albon finished fourth with the fastest standing lap on the softs, after losing several laps for running too wide at the final turns earlier in the session, 0.987s slower than Bottas's session-topping best, with Lando Norris fifth for McLaren.

Ocon took sixth ahead of Perez, who also set his fastest time on the mediums, with Charles Leclerc, Daniel Ricciardo and Lance Stroll rounding out the top 10.

Just before Raikkonen's fire, George Russell had had to bring his Williams back to the pitlane with a suspected MGU-K problem, smoking emitting from the rear of the car.

As he was being pushed back into the garage, his mechanics had to step away from the car as its electricity warning light was flashing red and it was subsequently isolated in his garage as the problem continued long after Russell had climbed out.