Lewis Hamilton beat team-mate and title rival Nico Rosberg to pole position, with both getting through Q2 on the soft tyres, meaning they will start the race on those sets.

Red Bull chose to split its Q2 strategy with Max Verstappen, who lines up fourth, taking the soft, while Ricciardo took super-softs.

With Mercedes plagued by bad starts throughout the season, Ricciardo suggested the extra grip from the softest tyre could be crucial at the start.

"I'm not concerned as we expected it to go like this," said the Australian.

"Max wanted to try the soft and I was happy to go on the super soft.

"I was a bit more comfortable on that tyre in the long run yesterday, that was the reason for that.

"Hopefully it gives me a better launch off the line.

"The car was working pretty well and we've got a good chance tomorrow.

"Hopefully the super-soft gives me a little bit of friendly grip off the line."

Hamilton has previously won three times in four attempts in Austin, but he has never started the race on pole position. 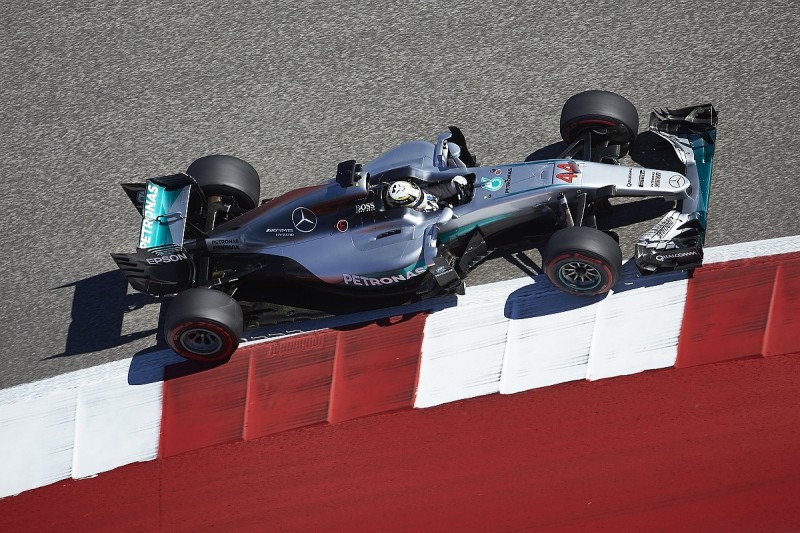 Despite Mercedes' problems with its starts this year, the reigning world champion, who trails Rosberg by 33 points in the standings, was hopeful of making a good getaway.

"I feel amazing," he said. "It's been many years of trying [to get pole here].

"I feel positive, we've worked hard over the last couple of weeks understanding and improving on lots of areas.

"I've been practising the starts all weekend so I feel positive about it for tomorrow."

Hamilton did his damage in the first sector, where he was nearly three tenths quicker than Rosberg, but the latter remained optimistic about his chances on Sunday.

"Lewis was just quicker in sector one so pretty simple," Rosberg said.

"That's the way it goes sometimes.

"It was a good lap I did in the end so I was pleased with that.

"Nevertheless, as we've seen this year qualifying is not all important so from P2, I still have a great chance."

Valtteri Bottas will stay with Williams in F1 for 2017