Ferrari Formula 1 driver Sebastian Vettel admitted he "chickened" on the brakes at the end on his Chinese Grand Prix qualifying lap, although the loss didn't cost him pole position

Vettel qualified second, 0.186s behind the Mercedes of Lewis Hamilton, and just one-thousandth of a second ahead of Valtteri Bottas.

The 29-year-old was surprised to be so far off Hamilton, but was overall happy with his performance during qualifying.

"I enjoyed it a lot, if we could have been a bit quicker at the end I would have enjoyed it more," said Vettel.

"The last corner, maybe I lost a little bit and chickened onto the brakes too soon.

"Obviously it was very close with Valtteri, so a good job we just got enough margin to make it to the front row."

Vettel believes the performance in China confirms Ferrari is a little slower than Mercedes in qualifying trim.

But he was 0.082s closer to Hamilton than he was in Australia, and over a longer lap time, and is confident the Ferrari will be stronger in the race. 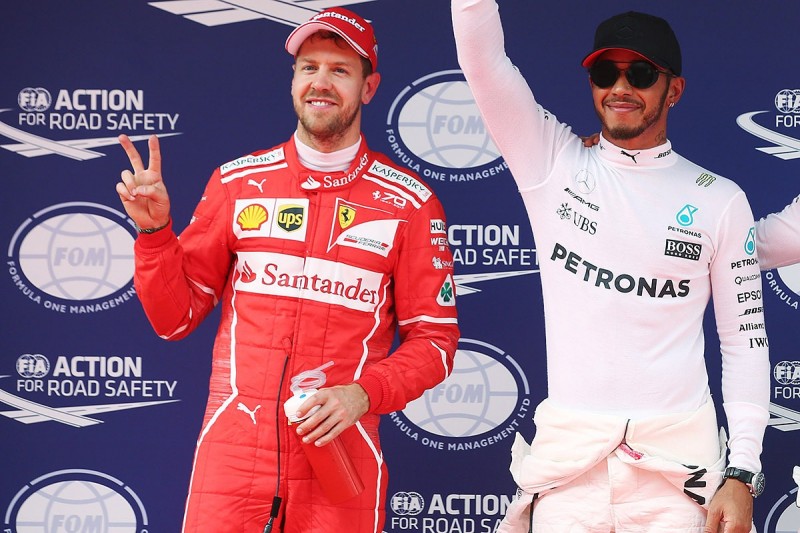 It's unclear where Mercedes stands on race pace given there was no meaningful running during Friday practice.

"In qualifying, we lack a bit and in the race it is a close match," said Vettel.

"In Australia, in the race, Lewis was struggling with tyres and us less.

"No matter what conditions are, the car is working so then we will try to do the fastest race."

Hamilton said the pace of Vettel and Ferrari had impressed him during practice and much of qualifying before he took pole position with a lap that started slowly, possibly because the tyres weren't up to temperature.

"Ferrari have looked so fast in practice this morning and in qualifying we knew it was going to be close, so I needed a perfect lap," said Hamilton.

"The last lap was my best lap, which is always the plan. The lap started off not as good as Q1 but the rest of the lap it got better and better."