Valtteri Bottas narrowly beat Formula 1 team-mate Lewis Hamilton to the fastest time in second practice for the British Grand Prix, as Mercedes moved to the top of the order

Bottas set a searing pace in the early part of the session, almost eight tenths clear of Max Verstappen's Red Bull, which was initially next fastest on the medium compound Pirelli tyre.

Hamilton was 1.225 seconds down on Bottas on that tyre, after a run that included a brief off-track moment at high speed.

Bottas then struggled to beat his own benchmark after bolting on the softest compound. He was two tenths off after running wide at Becketts, before finally managing to shave five hundredths of a second from his previous best time to set a 1m26.732s lap that stood as the fastest of the session.

Hamilton produced a cleaner performance on the soft tyre, but was still 0.020s slower than Bottas's medium tyre effort in lapping second quickest.

Hamilton understeered off at the exit of Becketts on his second flying lap on softs, then aborted his third stab after clocking a time three tenths down on Bottas at the end of Hangar Straight.

Charles Leclerc was third fastest in the best of the Ferraris, as the Scuderia showed improved performance relative to Red Bull on the softest tyre.

Leclerc was nine tenths down on Bottas on mediums, and slower than Pierre Gasly's Red Bull too, but closed to within two tenths of the leading Mercedes on softs and finished the session well over two tenths clear of Ferrari team-mate Sebastian Vettel.

Vettel was another driver to go off at speed early in the session, losing control at Becketts then returning to the pits.

The Ferrari driver made another attempt with medium tyres on a quiet track during the mid-session lull in action, but could not get within a second of Bottas, despite displacing Hamilton on the timesheet.

Vettel's soft tyre run was more respectable, but still almost half a second adrift of the leading Mercedes.

After topping the times in first practice, Gasly regressed to fifth in the afternoon session, over half a second down on Bottas but encouragingly within a tenth of Vettel's Ferrari.

The McLaren-Renault of Lando Norris recovered from a wild off at Becketts to impressively split the two Red Bull-Hondas and lap sixth quickest on soft tyres, three tenths down on Gasly but 0.016s clear of Austrian GP winner Max Verstappen, whose soft tyre run was less impressive than his early effort on mediums.

Norris also led the way among the midfield runners on medium tyres earlier in the session.

His McLaren team-mate Carlos Sainz Jr was eighth, while the Toro Rosso-Honda of Alex Albon and the Racing Point-Mercedes of Sergio Perez rounded out the top 10. 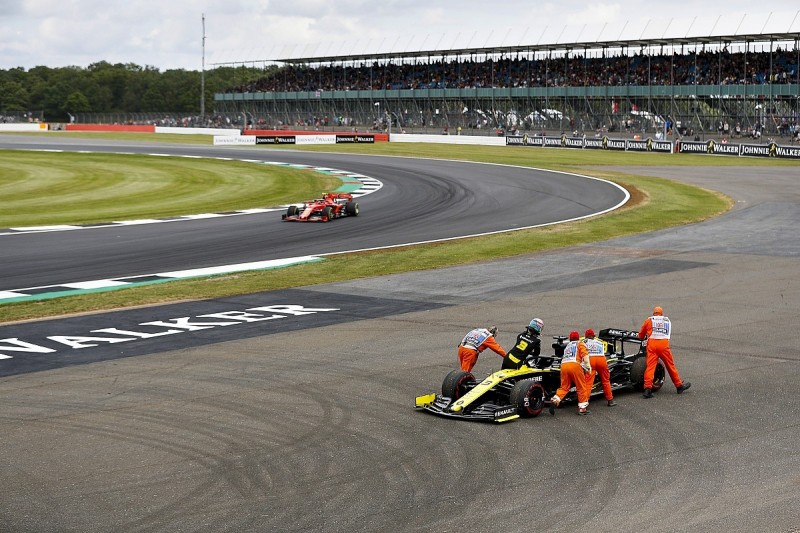 After getting both cars in the top 10 in FP1, Renault endured a difficult afternoon session. Daniel Ricciardo was 14th and Nico Hulkenberg 15th quickest.

Ricciardo complained of "crazy understeer" early on, before his car mysteriously switched off at Maggotts during his long run.

British driver George Russell was slowest of all for Williams, his running severely restricted by a gearbox problem.

Why McLaren and Red Bull starred on Friday

Red Bull's Verstappen: Promising to be so close after poor Friday