Lewis Hamilton won a seesaw battle with Kimi Raikkonen to be fastest in final Formula 1 British Grand Prix practice, in a session interrupted by a huge Brendon Hartley crash

Ferrari had set the early pace in FP3 at Silverstone, with Raikkonen producing two laps inside 1m28s to hit the front, while team-mate Sebastian Vettel was not within half a second before the red flags flew for Hartley's accident.

The Toro Rosso driver crashed heavily at Brooklands after front left suspension failure pitched him into a spin. The front wheel appeared to collapse as he braked for the corner.

Hartley was taken to the medical centre for checks but later given the all-clear. 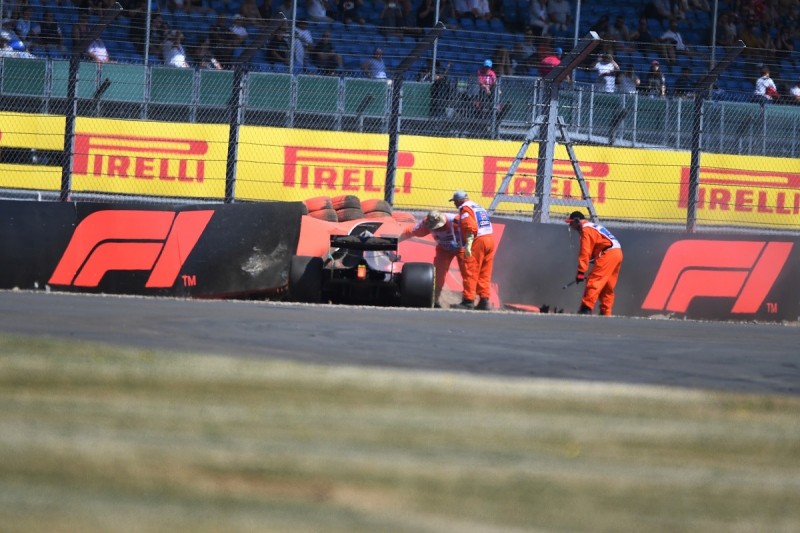 Toro Rosso mechanics performed checks at the front of team-mate Pierre Gasly's car in the aftermath of the shunt, as the session was delayed by 15 minutes while marshals retrieved Hartley's wrecked car. Gasly did not return to the track after Hartley's crash.

After that delay, Vettel returned to the track and closed to within 0.144 seconds of Raikkonen, before Hamilton took a turn to hit the front.

The reigning world champion initially split the two Ferraris in his Mercedes, before improving to a 1m27.442s best to lead Raikkonen by 0.165s.

Raikkonen dug deeper on his next run, producing a 1m27.199s lap to wrestle top spot back from Hamilton with just under 15 minutes of the hour remaining.

After a scrappy early run that left him only fourth, Valtteri Bottas then squeaked ahead of Hamilton to go second quickest, before Raikkonen again stamped his authority on the session with a lap half a second quicker than anything Mercedes had managed up to that point.

Hamilton regrouped and had another stab with 10 minutes remaining, setting the quickest time of all in the first and second sectors and stealing the top spot back from Raikkonen by just under a tenth of a second.

Bottas finished up third fastest in the second Mercedes, more than half a second down on Raikkonen, while FP2 pacesetter Vettel was only fourth.

The championship leader did not attempt a second set of runs, with Ferrari tweeting Vettel had a "nuisance on his neck".

The Red Bulls of Max Verstappen and Daniel Ricciardo rounded out the top six, but only after an unexpected challenge from the Sauber of star rookie Charles Leclerc.

When both returned to serious action on the soft tyre later on they were eventually split by just 0.006s and finished up not much more than a tenth faster than Leclerc's Sauber.

The second Sauber of Marcus Ericsson rounded out the top 10, beaten by late improvements from Kevin Magnussen and Romain Grosjean, who finished the session eighth and ninth for Haas.

The Force Indias of Esteban Ocon and Sergio Perez were 11th and 12th, while Fernando Alonso's McLaren, fitted with a new engine and MGU-H ahead of the session, was 13th without running the softest tyre.

Team-mate Stoffel Vandoorne conducted a constant-speed aero test at the start of the session, with flo-vis paint on the halo of his car, as McLaren continues to investigate the aero losses it has suffered with its 2018 design.