In dreadful conditions, Lewis Hamilton cruised to a famous victory by over a minute from the rest of the field at Silverstone in 2008. Here's the tale of how the then-McLaren driver turned the tide in that year's title fight

One of the most frequent rebuttals to misty-eyed folk remembering 'the good old days' in Formula 1 is how one-sided the results were in the category's supposed heyday.

Long gone are the days of six cars finishing and races being settled by minutes or even laps, with improved reliability and closer competition making this one of the fairest eras in F1 history - even if it may not feel that way at times.

In recent F1 history, very rarely has the majority of the field been lapped. In last year's Hungarian Grand Prix, Lewis Hamilton lapped all but the three cars behind him, but the race was only won by 17 seconds over Max Verstappen.

Verstappen himself was alone on the lead lap with Ferrari drivers Kimi Raikkonen and Sebastian Vettel at the 2018 Austrian Grand Prix, while just three cars completed the distance in Spain in 2017. Hamilton won the race by three seconds from Vettel, with third-placed Daniel Ricciardo over 70 seconds further back.

While this shows the disparity in the field, the victory margins were still somewhat respectable.

But to find the latest real 'freak' result in F1 history with an enormous gap at the front, you don't have to go as far back as one may expect. It was a race that brought out the very best in a young Hamilton, who delivered a performance so sublime in his second season of F1 it is still regarded by many as his greatest win - high praise given there are 84 to choose from.

Hamilton arrived at the 2008 British Grand Prix in desperate need of a breakthrough victory. An embarrassing pitlane crash in Canada followed by a failure to score in France left him 10 points off championship leader Felipe Massa, with Robert Kubica and Kimi Raikkonen also ahead of him in the standings. So tight was the competition at the front that he could ill afford to lose more ground. 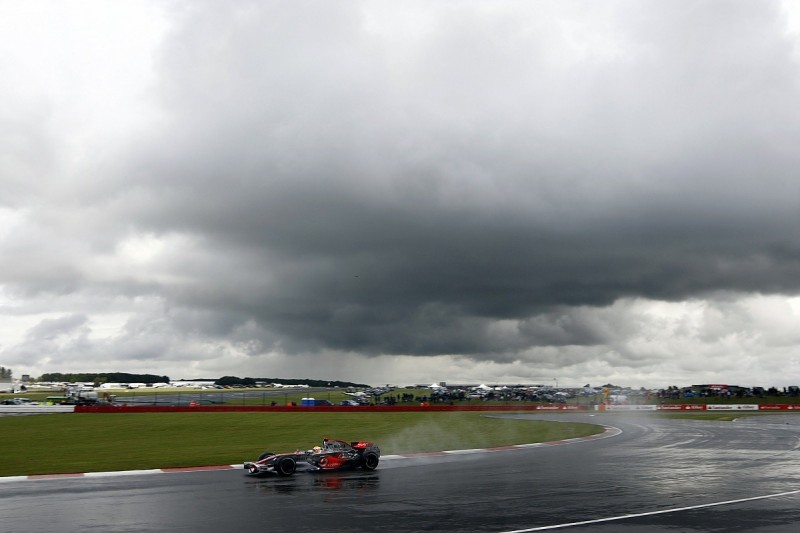 Twelve months on from his charge to pole at Silverstone, Hamilton could only reach the second row of the grid this time around. A mistake on his first Q3 run was followed by a so-so lap only good enough for fourth place as McLaren team-mate Heikki Kovalainen grabbed his maiden pole position. Mark Webber took an excellent P2 for Red Bull ahead of Raikkonen in third.

Hamilton was still hopeful of a first win at home heading into the race given the heavy rain forecast. He wasted little time in delighting his fans cowering under umbrellas as the showers continued at the start, vaulting Webber and Raikkonen on the short run to Copse before going side-by-side with Kovalainen. A brush of contact between the McLarens gave Kovalainen a snap, but the Finn caught his car and maintained his lead in the early stages.

"I had to think about it - imagine if I'm a minute ahead and I go off. That would be the most embarrassing thing, I'd have to retire!" Lewis Hamilton

But drivers were struggling further back. Webber and championship leader Massa were just two of the drivers to spin on the opening lap. It would be the first of five spins for Massa on a day where the gulf in wet weather performance between himself and Hamilton looked greater than ever, the Brazilian ultimately finishing two laps down as the last classified finisher.

As others were pre-occupied merely keeping their cars on-track, Hamilton was on the move. He managed to get a run on Kovalainen coming onto the Hangar Straight before slinging his McLaren up the inside at Stowe on lap 5, moving into a lead he would never relinquish.

Hamilton streaked away as Kovalainen dropped to third following a spin, handing second to Raikkonen. As the rain stopped and the track dried out, reigning world champion Raikkonen began to look more at ease on his set of intermediates, reeling in Hamilton lap by lap. The pair sat over 10 seconds clear of the field when they pitted together at the end of lap 21, setting up a two-man battle for victory.

But a Ferrari strategy miscue would end the fight completely. While McLaren fitted Hamilton a fresh set of intermediates in anticipation of more rain, Ferrari opted to keep Raikkonen on his worn set of tyres, only topping his Ferrari F2008 up with fuel. The team had not expected the rain to return - but it did, causing Raikkonen to sink rather than swim. 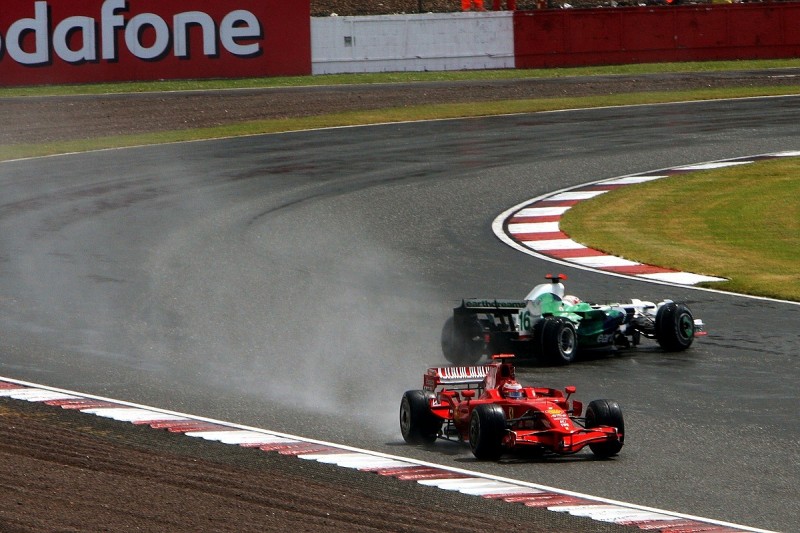 The shower hit just a few laps after Hamilton and Raikkonen had pitted, drenching the circuit once again. It sent a number of drivers off, including Raikkonen, who was forced to come back in just nine laps after stopping, becoming the last driver on the lead lap down in 11th.

Hamilton had continued to power ahead at the front, but behind him both Nick Heidfeld (BMW-Sauber) and Rubens Barrichello (Honda) were on the move. Heidfeld had picked off the floundering Finns of Raikkonen and Kovalainen along with Timo Glock and Fernando Alonso in a run up to second place in the early stages of the shower. As the rain grew heavier, Honda pulled a masterstroke by switching Barrichello to extreme wet tyres, allowing him to scythe his way from ninth to second in the space of just seven laps - and even overtake Hamilton to unlap himself.

Barrichello's charge would be stunted when he was forced to pit again due to a fuel rig issue, dropping him back to third behind Heidfeld, but they were the final drivers remaining on the lead lap entering the closing stages. Even as the skies brightened, their rivals behind were still slipping off the track - and Hamilton was continuing to push on ahead, not missing a single beat.

And he wasn't even pushing at times. "If I go any slower, I'll stop," Hamilton had told his McLaren team over the radio in response to concerns he was risking too much with such a huge lead.

"The team were telling me: 'You're five to seven seconds faster than the guy behind you,'" Hamilton recalled later. "I thought: 'What's going on?' I said, 'I'm comfortable at the pace I'm going.'

"Then I had to think about it - imagine if I'm a minute ahead and I go off. That would be the most embarrassing thing, I'd have to retire!"

Hamilton kept it together to stay on-track and take the chequered flag for his seventh grand prix victory. By the time Heidfeld crossed the line over a minute later, Hamilton was already most of the way down his cool-down lap, soaking up the adulation of the Silverstone crowd.

The result would prove crucial for Hamilton's title charge. It put him back into the lead of the championship, a position he would retain for the remainder of the season - with the exception of those 38 seconds in Brazil when Massa appeared to have the title won.

"It is definitely and by far the best victory I've ever had," Hamilton said after the race. 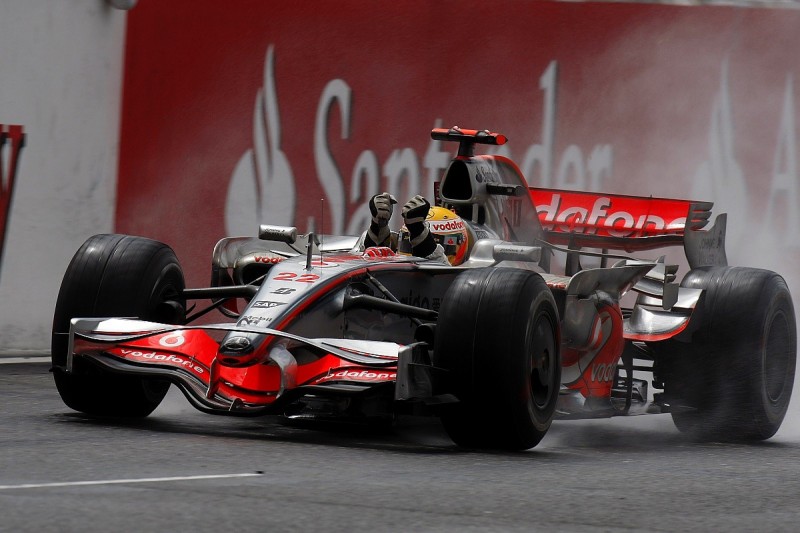 "I couldn't see through my visor. Through Turn 1 and 2 I had to clean my visor, put it up and back down again, on every lap especially when it was raining. I couldn't see anything. It was so extreme, so tough, a real mental challenge.

"On the last laps I could see the crowd starting standing up, and I was praying, praying 'just finish'. You can imagine the emotions going on inside and I wanted to get it around."

Not since Damon Hill's win at the 1995 Australian Grand Prix, now over 25 years ago, had there been such a huge margin at the front

Hamilton's official margin of victory over Heidfeld was 1m08.577s, with Barrichello a further 14 seconds behind. Nine cars were one lap down, with Massa a distant two laps behind the race winner.

Even for all of Mercedes' success through the early part of the V6 hybrid era and the 'big three' domination post-2016, no victory since Hamilton's 2008 Silverstone win has been so large. The closest anyone has got is the 37-second gap over the field Nico Rosberg enjoyed at the 2016 Chinese Grand Prix.

And before Hamilton's win? Not since Damon Hill's win at the 1995 Australian Grand Prix, now over 25 years ago, had there been such a huge margin at the front. Hill won that race by two laps in a race of attrition that eliminated most of the frontrunners. It remains the second-biggest victory margin in F1 history.

Hamilton frequently says how poor his memory is, struggling to recall races even in the season he is racing in at times. And he'd be forgiven for not having crystal-clear recollections of Silverstone 2008 given his tally of race victories and, indeed, British Grand Prix wins (six). But one would imagine it is still up there among his finest hours in F1 machinery.

Regardless, the race certainly holds a place in F1 history for the last 'freak' result, one that seems unlikely to be repeated barring some extraordinary circumstances. 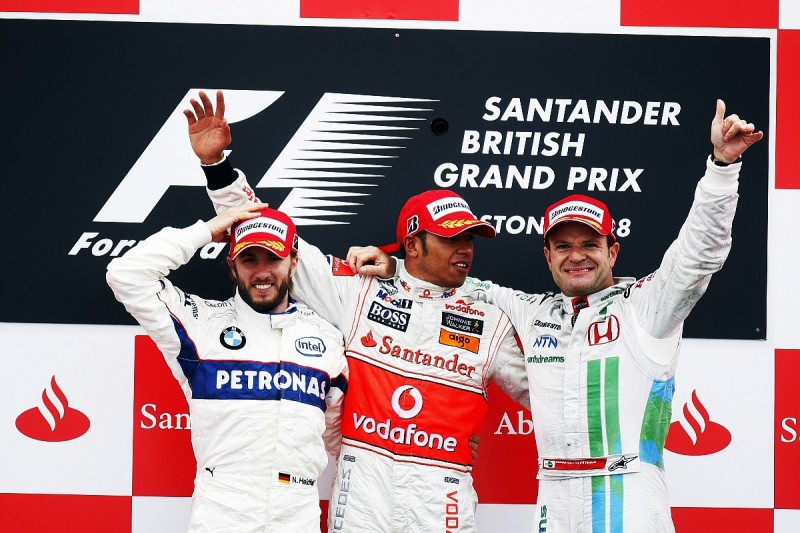